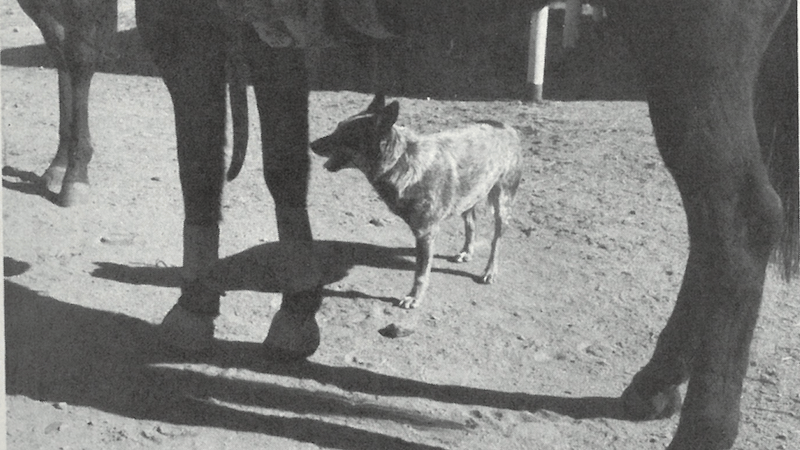 Despite being hit by a car, Fred the three-legged dog continues to play an important role at the Woolsey Ranch in Dewey, Arizona.

By CHUCK KING, originally published in the March 1982 issue of Western Horseman.

Pete Woolsey opened a door leading out of his ranch a house at Dewey, Ariz., south of Prescott, and was greeted by a pathetic sight. Just outside the door sat his Queensland Blue Heeler with one front leg dangling. The dog, a spayed female with the unlikely name of Fred, had been turned out of the house earlier that morning and had gotten hit by an automo­bile on the highway that runs by the Woolsey ranch.

“She just sat there and didn’t make a sound but she was looking up at me just waiting for me to help her,” said Pete. He took her to Prescott to veterinarian Jim Sa­voini with the intention of having her put out of her misery. There was no chance of saving the in­jured leg as it was almost com­pletely severed from her body at the shoulder. And Pete figured that she would never again be able to work stock with him.

Jim Savoini told Pete that he would amputate the leg and that Pete should take her home and not baby her. Turn her loose around the ranch and let her travel on three legs and work stock the best she can; this was the advice the vet gave Pete. At home with the stitches in her hide where the am­putation had been made, the five­-year-old Fred never hesitated when it came time to corral the roping steers and rope the cattle in the ranch arena.

She hopped to the catch pens as fast as a three-legged dog can, gathered the steers, brought them to the chutes through the arena’s return alley, and loaded them in the chutes. Then she laid down in her customary spot beside the chute where she can reach through the rails and nip a steer on the heel, should the steer need a little encouragement to leave the chute.

She no longer goes out into the rough, hilly pastures to work cat­tle with Pete—the travel is too tir­ing for her—but she performs her duties around the arena with an enthusiasm that tells you she’s enjoying every minute of it. And she’s a watchdog. Pete tells this story about her.

He had a friend staying with him, and Pete, his wife, and their son and daughter, and the friend went to Phoenix to a roping contest. After the contest Pete and his family stayed overnight in Phoenix and the friend drove back to the Woolsey ranch to spend the night. Deciding to take a shower the friend started to go into the Woolsey house. He didn’t make it through the door. Fred stood him up in the yard. She knew him—­hadn’t he been around the ranch for weeks roping steers? Sure he had. But Pete and his family weren’t home, so nobody goes into the house. That was the stand that Fred took. It was obvious to the friend that she wasn’t bluffing. He backed off and went without the bath.

Speaking of Queensland Blue Heelers, Pete says: “Some of them I like and some of them I don’t. I like the slight-built ones like Fred. They are active. Some of the others are too heavy, too bulldog looking. The short-legged, heavy ones play out on you when you’re workin’ outside horseback. The slim trim ones can go all day behind a horse in the pasture and not give out. Before Fred lost that leg, she’d stay with me 16 hours a day and still be workin’ when we were comin’ in (to the ranch buildings).”