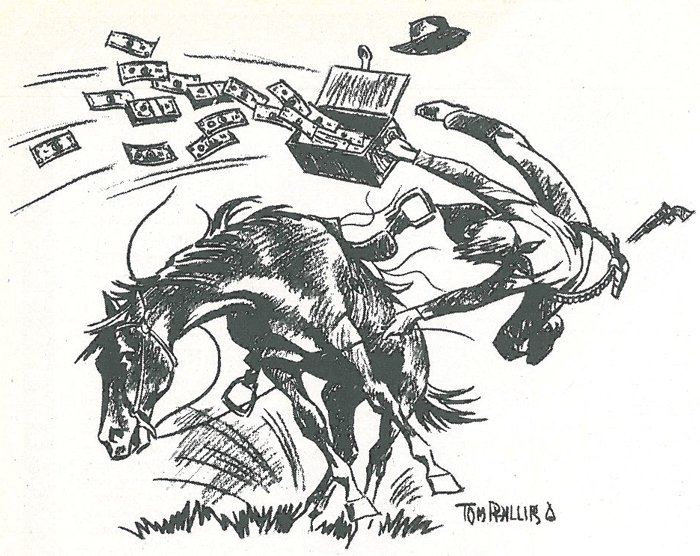 Man Off A Horse

The outlaw that couldn’t ride.

Dick Fellows had more trouble happen to him in his short-lived outlaw career than any road agent in the last century.

From the time he was sent to San Quentin prison for robbery and assault with the intent to murder, until he was returned 12 years later to Folsom prison, this bandit got himself into trouble continually, and all because of horses.

Horses were Dick Fellows’ nemesis. If it wasn’t for a horse he might have gone down in renegade history as a great hold-up man. Instead, the horse he chose to ride threw him at an inopportune moment, and a quarter of a million dollars was lost to him.

Fellows was a tall, handsome, dark-haired man of 24 when he was sentenced to San Quentin in 1870. Somehow he finagled a job in the prison library and gave lectures to the inmates who would listen. He organized Sunday school classes and taught Bible study. He was a conscientious worker and a good influence on the other prisoners. The prison officials concluded that Fellows had learned his lesson and the error of his ways, and in April 1874, he was released.

The following year he was in trouble with the law again. At Caliente, a small town at the foot of the Tehachipi Mountains in California, the Southern Pacific Railroad was blasting a right of way. Fellows and a newfound friend were in the vicinity looking for easy money. A stage drove up just then and they saw chief detective Hume of Wells Fargo riding outside. They surmised that a valuable shipment must be aboard – in three strongboxes $240,000 in gold was stored.

Plans were formulated to hold up the stage. Fellows hired a horse and was to ride cross-country to meet his partner at a prearranged rendezvous. For some reason the horse that Fellows rode threw him and sped off home, leaving the outlaw to hoof it back to town. He never saw his partner again.

Needing funds badly, he decided to single handedly halt the northbound stage from Los Angeles that was due that evening. He stole a horse and held up the stage. In a hurry to leave the scene, he tried to put the strongbox on the horse. The animal, not used to these odd doings, got scared and galloped off, leaving Fellows staggering with the loaded box in his arms.

He recalled that the railroad had small tunnels nearby, and figured to hide the box in one of them till daylight. He set out in the darkness, walked off a twenty-foot drop, and broke his leg above the ankle. Undaunted, he pushed the box ahead of him and hid it in the brush.

Early the next morning he stole an axe from one of the tents of the Chinese railroad workers and broke open the box. Its contents–$2,000. Next, he fashioned himself a pair of crutches from a tree limb and went down to a farm he ‘had seen earlier. Here he borrowed a horse without the owner’s permission and took off.

When detective Hume heard about the Wells Fargo holdup, he made a beeline for Caliente. On the way he found the young son of the rancher whose horse Fellows had stolen. ”I’m tracking down the thief,” he told Hume.

“So am I,” the detective said.

“Pa run out of horseshoes, so he tacked on a mule shoe.”

Later he received word the boy had found a man on crutches. The man was Fellows. He readily admitted stealing the horse, but denied the holdup. Fellows was taken to jail and over a thousand dollars was found on his person. Under severe grilling he still stuck to his story maintaining innocence. There was nothing Hume could do, so he left for San Francisco while Fellows was charged with horse stealing.

A few days later the bandit asked for writing material and asked Hume to come down. He would tell all. He admitted the stage robbery. He was placed in a hospital until his leg healed, then tried for his crime, found guilty, and sentenced to eight years.

While waiting to be transported to San Quentin, he escaped with the aid of a new pair of crutches. A few days later he stole a horse from a farm. When he tried to saddle the animal, the crutches scared the horse and he ran off back home. A horse had tricked him again.

Fellows refused to give up. Waiting until the farmer left the house, he told the farmer’s wife he was a traveler and lost. She asked him in and fed him. When the farmer returned, his wife told him about the nice young man on crutches. That night Fellows was in jail again. In June he was in San Quentin.

He got his old job back at the library and five years later he was released. One month after his release, he was caught at a stage holdup. On his way to prison he escaped. With $600 reward on his head, he was soon caught. Guarded 24 hours a day, he was taken to Santa Barbara, tried for robbery and sentenced to Folsom for life.

While waiting to be taken to Folsom, he escaped again. Not many blocks from the jail he found a staked out horse. He pulled up the stake and climbed aboard. After running a short distance, the animal began to buck, and Fellows hit the dirt–out cold.

Later while on the way to Folsom, he learned the horse he tried to ride was recuperating from eating loco weed and was tethered out to. Keep from doing harm.

A horse had whipped him again.