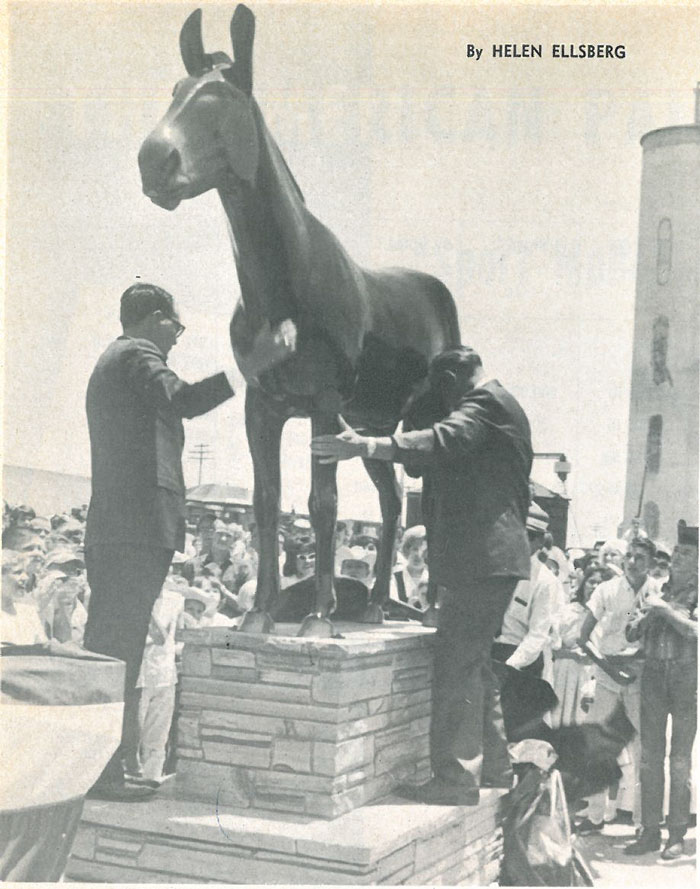 Monument to the Mule

Mule Day in Muleshoe! A monument for America’s unsung hero, the mule.

Old Pete stands proudly as he is unveiled by Robert Alford (left) and Harmon Elliott of the National Mule Memorial Association. Photo by Cline’s Studio.

Some 10,000 people jammed the town of Muleshoe, Texas during a 4th of July celebration this year to pay tribute to a generally unappreciated, oft-reviled, and unsung American hero — the mule.

Old Pete, newly emerged from his mold, stands with the mule’s characteristic far-away look in his eyes.

Texas Attorney-General Waggoner Carr spoke to the crowd assembled for the unveiling ceremonies of a life-sized sculptured fiberglass replica of Old Pete, an 18-year-old, 1,100-pound Muleshoe mule belonging to Dave Anders. Carr said, “It is good that we finally give recognition to the mule, that has served us so long and so well.”

The huge crowd stood on rooftops, hung onto railroad cars, and climbed to vantage points on grain elevators. Many a sober-faced, tractor-owning farmer’s eyes were nostalgic with memories of plowing behind a span of mules in the days of his boyhood.

There was a parade featuring the Rolling Plains Mule Team from Spearman, Tex., ten covered wagons drawn by mules, and an assortment of 75 mules led or ridden.

Newspapers throughout west Texas were filled with mule stories and poems, old mule photographs sent in by subscribers, and advertisements congratulating Muleshoe, its celebration, and its statue.

Any way you looked at it, it was Mule Day in Muleshoe!

How, after years of receiving more cussing than kudos, did the mule finally happen to receive a display of the appreciation he so richly deserves?

It all began when a Texas writer and historian, V.H. Torrance, noted the absence of the mule at the Fort Worth Stock Show and wrote a story expressing his concern over the rapid disappearance of the mule from the American scene.

The late Dr. J.B. Barnett read the story and suggested to Torrance that a memorial to the mule be erected in the Will Rogers Coliseum at Fort Worth. He sent along a contribution to get the ball rolling.

The citizens of Muleshoe thought the memorial was a fine idea, but felt that their town was the logical place for it.