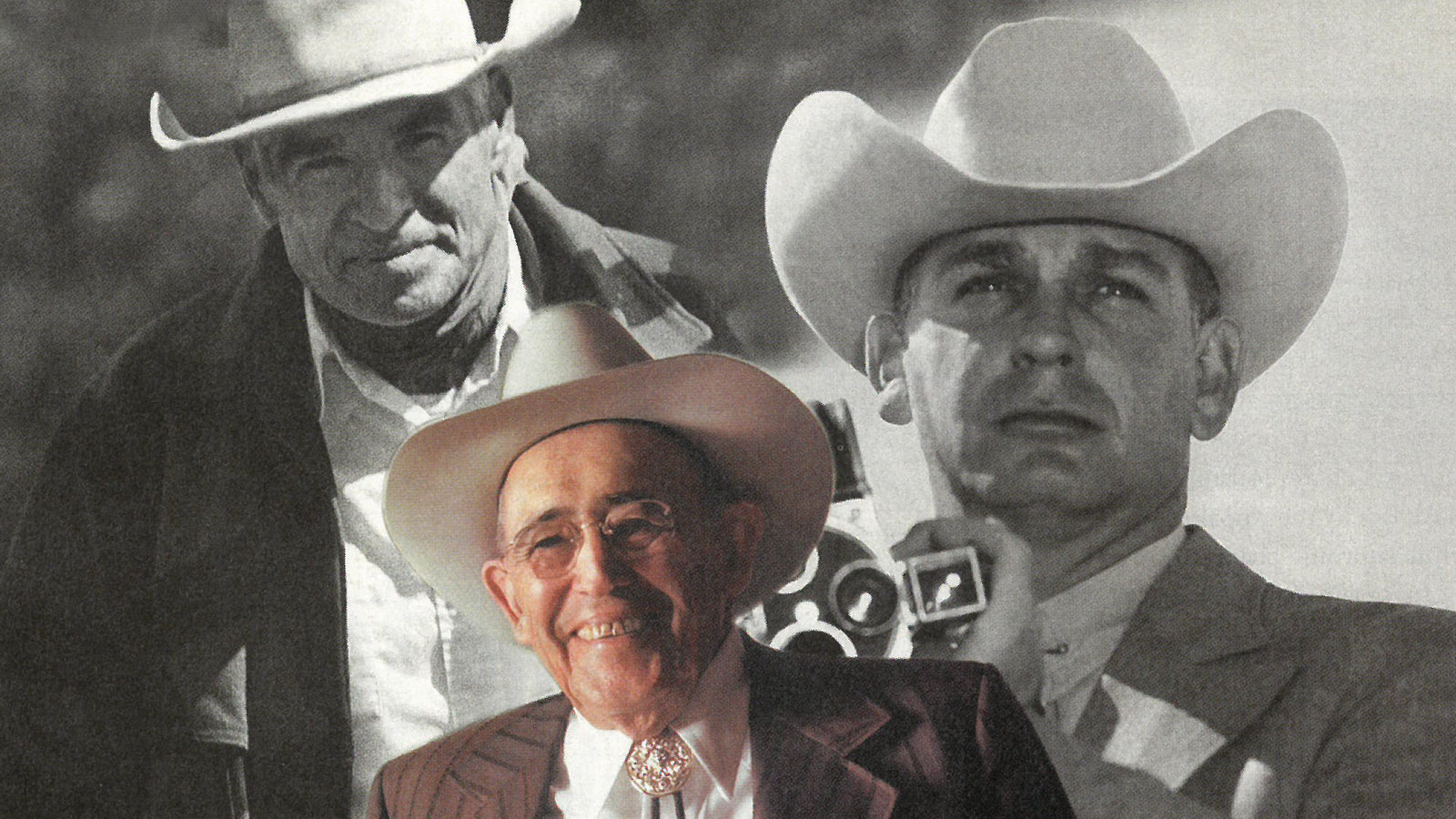 Here’s a look at how three eras produced distinct examples of influential horsemen.

Imagine bringing a child into today’s world. Now imagine the times-relevant phenomena to which this child will be exposed from birth. He or she will grow up affected by everything from the Internet and 24-hour cable-TV access to the proliferation of corporate mergers and the threat of global terrorism.

Given these unavoidable influences, what sort of horse person might this child and others of his generation become? What’ll concern them, motivate them, affect their values and their choices? When it’s their generation’s turn to take the reins of the horse industry and to produce its most memorable individuals, how will that tomorrow be affected by today?

For some idea of how to answer these provocative questions, let’s take a look at influential horsemen produced as members of three earlier generations. As products of their times, born 80 or more years ago, they left indelible marks. The story of each man’s relationship to his generation opens a window on ways we can expect today’s youth and young adults to leave their own distinctive imprints on our horse-world future.

So called by poet Gertrude Stein and novelist Ernest Hemingway, the Lost Generation was made up of those whose youth coincided with the dawn of the 20th century and whose lives were forever changed by emerging technologies and the cultural transformations brought on by World War I and its aftermath. This generation’s birth years witnessed such innovations as the telephone, the wireless telegraph, X-rays, movies, bicycles, automobiles and airplanes.

As the first global conflict and the first to be fought by mechanized and chemical means, World War I left many of its survivors alienated, reflective and filled with the urge to escape to a more naturalistic milieu. As a result, the Lost Generation produced an incredible array of extraordinary artists and writers. Importantly for students of horse-world history, the Lost Generation also was the last to be brought up in the horse-and-buggy era. This fact drove some remembers to live lives based on nostalgia for that aspect of their formative years.

Even those who gladly traded horses for automobiles were forced to spend their middle years in the grip of the Great Depression – another event that forced them to do whatever they could to survive a socioeconomic upheaval.

Born in 1897, California’s Luis Ortega was among the influential horsemen to arise from the Lost Generation. Though best known today for his reputation as the 20th century’s greatest braider of rawhide horse gear Ortega, starting in his teens, spent 20 years working as a vaquero on ranches throughout the West. This kept him out of the war and far from many of the problems caused by the velocity of social change.

Ortega took up full-time braiding in the early years of the Depression after suffering a horseback injury. As with other gifted artists of his generation, he chose to make his living in quiet creativity rather than to seek wages from an industrialized employer.

Later, Ortega parlayed his first-hand experience with traditional western horsemanship into a series of articles — published in the pages of Western Horseman — that left a lasting impression on the magazine’s early readers and their descendants. He also wrote two now classic books, California Hackamore and California Stock Horse. His familiarity with “the old ways” struck a chord with other who’d seen their pre-World War I society all but disappear.

Members of the G.I. Generation were among the Americans who fought and won World War II — hence the name, synonymous with U.S. soldiers, but originally an abbreviation for “government issue” or “general issue.” This is the generation that begat Superman, mythic champion of “truth, justice and the American way.” In the words of President John F. Kennedy (born in 1917), his was the generation willing to “bear any burden, pay any price” to accomplish what it set out to do.

In contrast to the Lost Generation, the G.I. group tended to embrace new technologies and other means of change. Its members included the first American children to grow up listening to radio and attending Saturday matinees at local movie houses. New forms of mass communication exposed them to more standardization than previous generations experienced. Thanks to the post-war G.I. Bill, this also was the first generation for which a college education wasn’t limited to the wealthy and the elite.

Monte Foreman, an innovator born in Alabama in 1915, epitomized the horsemen who sprang from the G.I. Generation. Raised by parents who owned and used horses, he attended Auburn University on a polo scholar­ship and was always fascinated by cow­boys, horses and anything western.

When the United States entered World War II, he enlisted in the Army and was assigned to the First Cavalry Division when its members still rode horses. In 1943, following his graduation from officers’ candidate school at Fort Riley, Kan., he was assigned to the cavalry school’s visual-aids department, where he learned the value of using film and photography for promotional purposes.

Foreman spent his next years working as a commercial artist, horse trainer and author. As with Luis Ortega, he published many articles in Western Horseman; these were accompanied by his own drawings. In 1954, he achieved his longtime goal of designing a western saddle that allowed maximum freedom of movement for horse and rider. Trademarked as the Balanced Ride,™ Foreman’s saddle became popular with riders everywhere and is still made today.

Foreman was a pioneer in other areas. He was the first nonmilitary trainer to make use of film and sequential photography as teaching aids for aspiring riders, and the first clinician to take his curriculum on the road. In one 5-year period, he put 700,000 miles on his clinic-on-wheels rig, producing 350 riding clinics in 36 states. He coined the term “horse-training science,” and recorded many of his theories in books and videos still available to the public. Foreman died in 1987 after helping an untold number of riders achieve their own horsemanship goals.

Given that its birth years fell between the Great Depression and the middle of World War II, the Silent Generation is relatively small. Not only were birth rates curtailed during this period, but the children who did come along between the mid-l920s and early 1940s also grew up amid the deprivations caused by a decimated economy and another world war. The term “Silent Generation” first appeared in a 1951 Time cover story about the youth coming of age then.

Long-suffering children of the silent generation learned to adapt to the world around them, respect their elders, obey rules, avoid risk and save money. They also learned to work hard not just for their own benefit, but also for the greater good. Though raised to conform to social norms, Silents were responsible for the civil-rights movement and other efforts in which they dedicated them­selves to striving for minorities’ rights. Their mid-life years occurred during the 1960s and ’70s, when one social upheaval after another seemed to shove their hard-won values aside.

Though born in the last half of 1924 and, thus, technically a member of the G.I. Generation, Idaho’s George B. Hatley personifies the influential horsemen raised as part of the Silent Generation. Now 80 and known as “Mr. Appaloosa” for his ongoing work on the breed’s behalf, Hatley assumed administration of the fledgling Appaloosa Horse Club while still in his early 20s. He spent the next 31 years at its helm — without pay for the first 11. He, too, used the pages of Western Horseman to help pass his knowledge to other horsemen.

Aided by his wife, Iola, and the mis­sionary-like zeal that’s yet to desert him, Hatley managed to grow a tiny society of spotted-horse enthusiasts into one of the world’s most widely recognized equine breed associations. In fact, by the time he was forced from office in 1978 by a board of directors who found him “too old-fashioned,” the Appaloosa was the third-most popular horse breed-a position it’s since lost. Yet despite losing his job as ApHC executive secretary, he continues to serve the breed in various capacities. These include 2004’s publication of his self-funded book on the Chief Joseph Appaloosa Trail Ride and his personalized tours of the Appaloosa Museum & Heritage Center.

Hatley’s efforts on behalf of other horse lovers aren’t limited to Appaloosa fans. For more than 35 years, he’s developed and maintained a 107-acre private horse camp made available free of charge to U.S. Pony Club children and other horse people. He also hosts annual wagon drives and sleigh rides as ways to bring his area’s equine enthusiasts together.

This article was originally published in the February 2005 issue of Western Horseman.