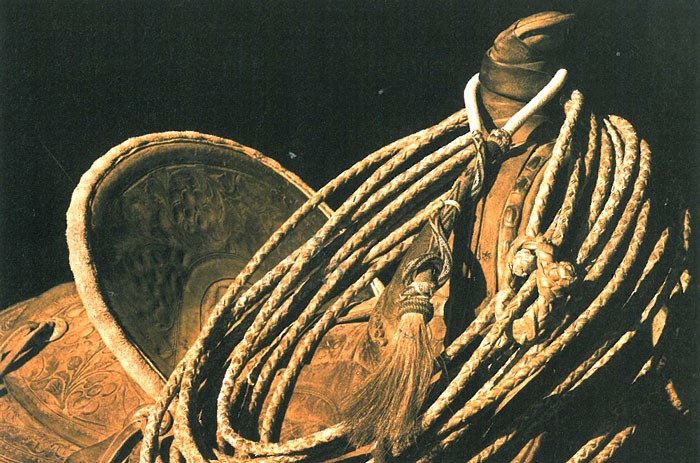 One of the most influential rawhide braiders of all time recounts his earliest lessons in the craft.

For generations, the reata has been a preferred tool for West Coast and Great Basin horsemen. Photo by Robert Dawson.

Throughout the world, every cow country has its different methods of roping or catching cattle and horses, and cow -catching plays an important part in the cowboy’s daily work.

In Australia, cowboys are shy on rope work, but are sure-shot artists with the 30- to 40-foot bullwhips they wrap around the legs of the critters wanted down. In South America, we find the bollas in common use. They consist of two or three balls of stone or metal attached to a rope by twisted strands of rawhide. The gaucho whirls them in the same fashion as is done here with the reata, and throws the bollas at the animal he wants. It’s pretty effective up to 50 yards or so, but is likely to break a leg or knock out an eye, and for that reason, it’s becoming unpopular now that South American ranchers are raising blooded stock.

On the big Hawaiian ranches, the cowboy, or paniola, maneuvers the reata in the true cowboy way. Here in California, and in parts of Nevada, Oregon and several other western states, the old method of dallying with a 50- to 60- foot rawhide, braided reata is still used. Not so much in the present day as 20 to 30 or more years ago, but there are a lot of riders who prefer the reata to the lariat and its tie-hard method.

Rawhide has been a lifetime study and hobby with me and, before going further, I feel I should call attention to the distinction between rawhide and leather. To one who appreciates the firm feel of a well-cured rawhide strand, it’s very annoying to have someone casually call it leather, something often done by people who come into my shop.

Hides and skins used for braiding rawhide aren’t put through any processes of tanning. They’re used in the raw state to cut into strands. To cure them, a special home recipe is used to make the hides pliable and still leave them in the raw state in which they’re classed. Briefly speaking, to tan hides and skins, various processes of oak bark or tannic acid and chemicals are used to break down the fibers of the cells and make them into leather. Thus rawhide is far superior to leather for its lasting qualities, or toughness, yet well-cured rawhide strands readily lend themselves to a variety of patterns, which, when finished, give a pliable piece of merchandise that has plenty of body to it but is not stiff or wiry.

Few people realize the amount of work it requires to make up a good reata. A professional reatero who has acquired his knowledge through years of experience will take plenty of time in selecting and preparing his material. By feeling the thickness of a green hide, he can tell whether it’ll make up into a four-, six or eight-strand reata. Care must be taken not to overlook any brands, old cuts, knife scars, and grub-worm holes or old callouses. If any of these scars or defects are in the hide, they should be cut out because they’ll leave a weak place which might break while braiding.

After selecting and dehairing the hide, it’s nailed to a platform to stretch and dry. Before cutting the hide into the first long strand, the thin places under the shoulders, flank and paunch, as well as all defects, are cut out. This first cutting is made in one continuous strand about 1-½ inches wide. The stretch is pulled out as the strand dries. When dry enough to cut easily, the curves are taken out by working the strand around a bolt, keeping the grain or hair side turned in.

For a 45-foot, four-strand reata, four perfect strands, each 60 feet long, are cut. Before braiding, they should be worked considerably so as to make them pliable. They’ll braid up much tighter, and the reata will be practically ready for use with a little working over on the horn of the saddle. This will take the kinks out of a new reata, and the roper can swing out a good loop.

This working of the unbraided strand mentioned above must be done carefully so the strand is of even firmness throughout. If some spots are stiffer than others, the reata won’t have the necessary balance, or “sail,” so essential to accurate throwing.

I’m often asked how I learned to braid, and I think this is as good a time as any to tell about it. An old Indian, Fernando Librado, taught me the fundamentals of rawhide braiding. Born on the Tulare reservation, he came to the Santa Inez Mission as a boy to get his education. Along with his schooling, he learned different trades and crafts, such as masonry, tanning of hides, making saddles, carpentry work and the braiding of rawhide.

Fernando remained at the mission for many years, working with cattle and breaking horses, along with other responsibilities. After he left, he rode on my grandfather’s ranch for several years. During that time, he continued to braid rawhide of such quality that his work was in demand by the vaqueros. Later, when he grew too old to follow the hard cowboy life, he became an herb doctor, and made yearly trips to gather herbs for his medicines.

Early every spring, in about the month of March, he’d start out from the reservation at Santa Inez, where he had his home. At that time, we lived on a large cattle ranch, where my father was foreman. Fernando would head for our place and, after a few days’ rest, continue up the country gathering his herbs. He knew just where to go, and which trails to use so he wouldn’t lose any time.