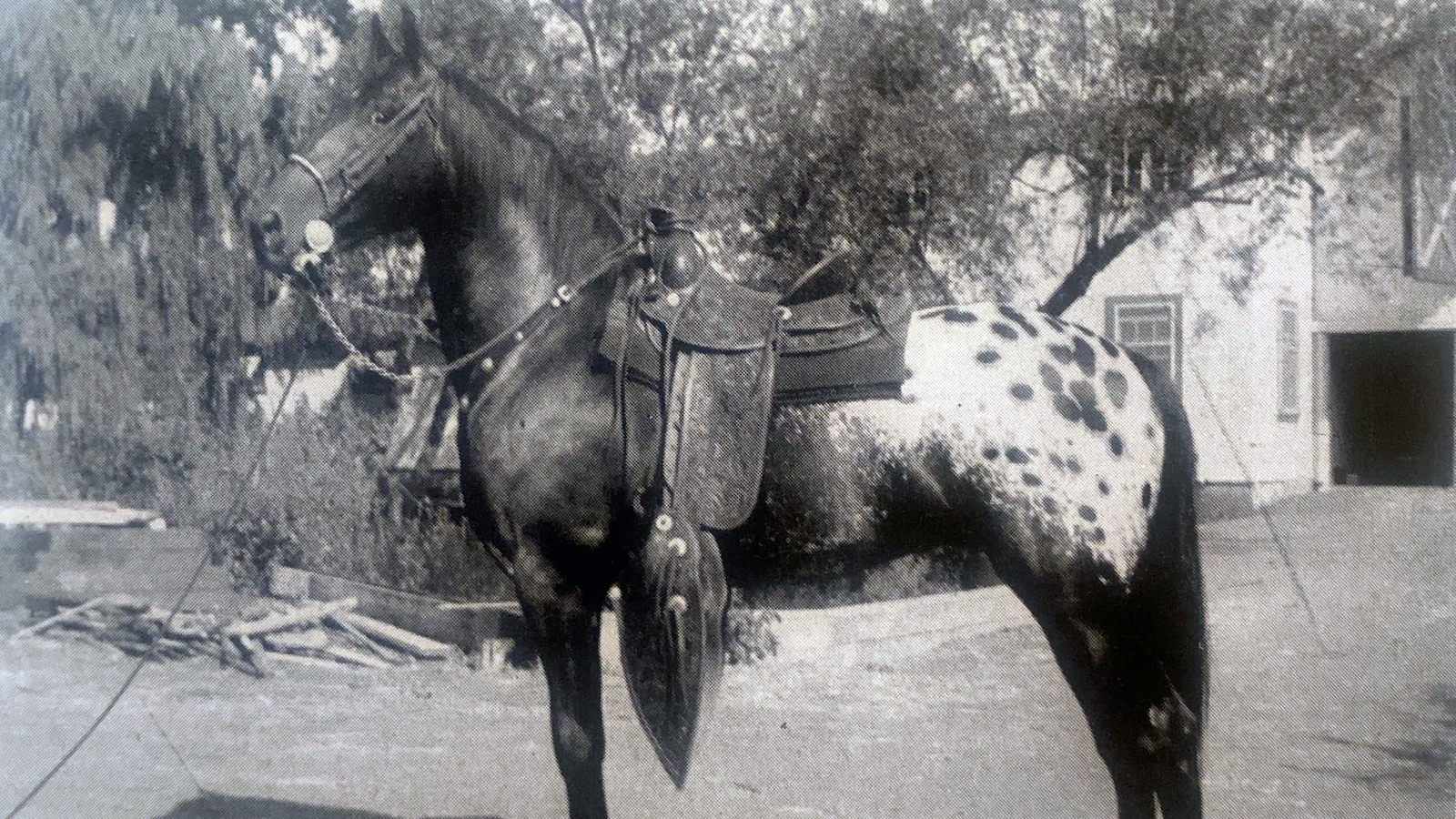 What is an Appaloosa? To most people, the term has no meaning. Those familiar with the Western horse have heard the term applied to animals with peculiar spots on the rump, and have usually considered it some sort of color term.

It is, however, a variant of the name of a breed developed by the Nez Perce Indians in the Palouse country of Central Idaho and Eastern Washington. Persons hearing the term “a Palouse” horse ignorantly corrupted it to Apalousey which in turn became Appaloosa. The spelling is an endeavor to indicate the French pronunciation of Palouse, which, like Nez Perce, stresses the final “e.” Current usage gives both of these words English pronunciation.

The Nez Perce, noted horsemen and horse breeders, raised many fine animals, but this special showy, hardy, speedy type was developed primarily for war use. This type was sometimes called the Nez Perce horse in more distant localities, but that name used locally would have resulted in confusion on account of the many other horses raised by these Indians, and hence the use of the special name Palouse.

The distinguishing characteristics of the Palouse horse are the color spots on the rump, a lack of hair on the tail and inside the thigh, a good deal of white in the eye, and pink skin on the nose. The most noticeable of these is, of course, the distinctive coloration. The variations commonly found are: roan, bay, or sorrel body with white spots; or white body with bay, sorrel or brown spots; or white body, roan rump with white spots; or roan, bay or sorrel body, white rump, and roan, bay or sorrel spots. Red roans are more common than blue.

These horses were of the best western Stock Horse build, weighing usually between 800 and 1050 pounds, 14 ½ to 15 ½ hands high, although the latter were rare. On account of their speed and endurance they were in demand throughout Montana, where they were used for saddle horses and in races at local celebrations. The old timers claimed Palouses were usually very good, but a poor one was entirely worthless. There seemed to be no in-between group.

After the main body of Nez Perce was placed on the reservation in 1855, the government agent discouraged the buffalo hunts and war raid across the mountains to the east, and encouraged farming and a more settled existence. This changed method of living was reflected in the type of horse raised, and the flashy war horse was discouraged. The non-treaty band, in the Wallowa country, still raised the war horses until their land was forcibly taken from them by the whites in 1877. After their war and unsuccessful dash for Canada, the survivors were exiled to Oklahoma, and their stock was appropriated by the white settlers. This scattered the Palouse breeding stock, and with the fencing of the open ranges and the plowing of the grazing lands for wheat fields, the large horse herds soon disappeared. With the passing of the old West, the Palouse as a distinct breed also disappeared, and is remembered only by a few old timers. The stray remnants are usually regarded merely as color freaks, but a variant of the old name still clings to them.

Would it not be a worthwhile undertaking for the owners of these beautiful animals to unite in restoring this find breed to its rightful place? Doubtless they could duplicate the success of the Palomino breeders, if they would register and establish the type before it is too late. Aside from the sentiment involved, such an activity would pay in actual dollars and cents to the Western horse breeders, and would lend another fine color note to our shows and parades. When this breed is restored, as I am sure it will be, should we not retain the old name and call this the Palouse horse once more? It is accurate, short, colorful, and historically significant. The spelling has been fixed, and it would not matter greatly whether the French or English pronunciation were adopted.

This article was written by F.D. Haines and originally published in the January-February 1937 issue of Western Horseman.