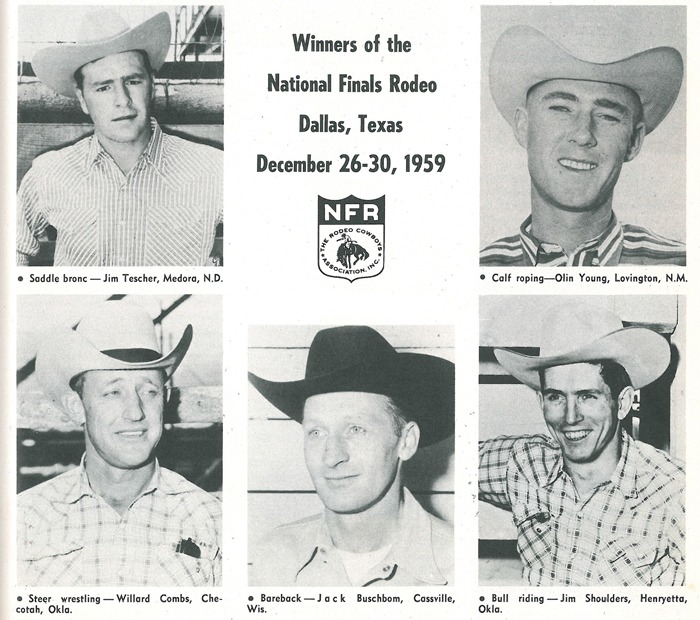 By Jerry Armstong, written in his column, Picked Up in the Rodeo Arena, in March 1960

In December, rodeo’s top cowboys and outstanding bucking stock, followed by a host of fans from all sections of the country, came to Dallas for the first annual National Finals Rodeo. For long, big league baseball has ended each season with its World’s Series playoffs. Now, annually, rodeo is to have its world series, the National Finals. In the dim and distant future, many an old cowboy grandpa will be able to say, “Yep, I contested at the first National Finals Rodeo in Dallas, Tex., way back in December, 1959.”

The first of the elite wild bunch to arrive in Dallas was Harry Tompkins, formerly of Tulsa, Okla., and New York state, but now a resident of Dublin, Texas. The versatile Harry Tompkins, a qualified entrant in the NF bull riding, was also in charge of constructing and setting up the NF bucking chutes in the State ‘Fair Livestock Coliseum. Tompkins had built the chutes on his place while recovering from an arena injury and surgery. In the middle of December, the spanking new steel-framed bucking chutes had been trucked to the Dallas arena and set up. The Tompkin’s chutes were designed with the safety of the rough string riders in mind. On this, the chute expert and former bull, bareback bronc, and all-around champion cowboy, said, “Just about every time I’ve been crippled up, it has been because of the chutes.”

The first loaded stock trucks rolled into Dallas on December 15. By December 21, the deadline, there were 210 broncs and bulls at Fair Park. This was an epochal aggregation of the greatest bucking stock in rodeo today. The gathered stock came from 14 states and Canada, from the rough strings of 25 rodeo stock contractors. The best were all there, with one notable exception, Harry Knight’s No. 1 bucking horse, Joker. Joker for the first and only time was out of the draw, replaced by a substitute Knight rough-string mount. It had to be this way, for Joker was dead. At the Harrisburg, Pa., Rodeo, the noted power bucker, Joker, unloaded 30 riders last season – sustaining what appeared to be a minor head bruise. But infection set in and spread, and en route back to the home ranch in Colorado Joker died of lockjaw.