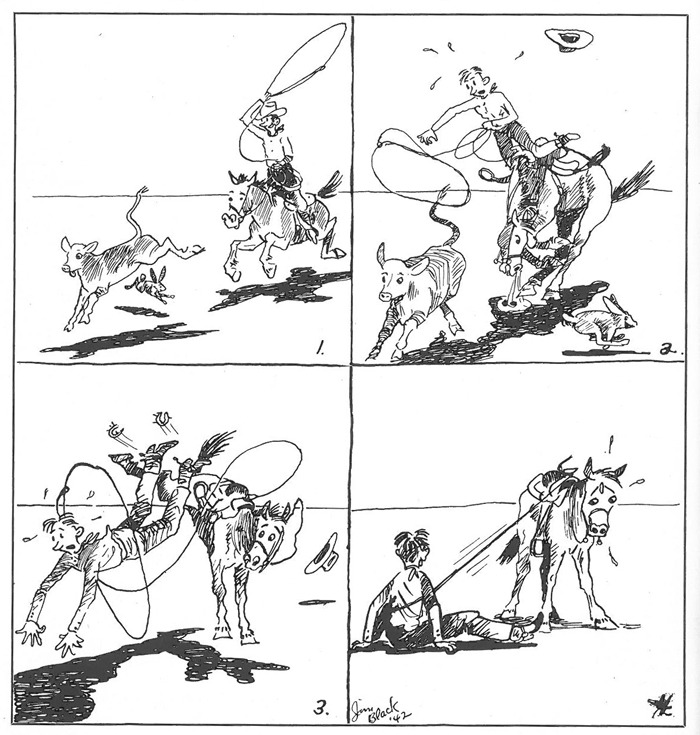 What Is a Gunsel?

It has a fleeting meaning understandable even to those who do not know exactly what it means.

By SOL TOREY, originally written in the May-June 1942 issue.

You can leave it to the horsemen of the West to coin appropriate words for anything and everything. The language of the West is alive and virile just as Western life is. Horses and cattle have had no little part to play in the development of Western language. The jargon of the cow camps has crept into American speech in a remarkable way so that today we use terms in everyday language we little dream the meaning of, yet somehow the words fit and are more descriptive than the best “King’s English.”

The most recent addition to Western picture language is “gunsel.” The word sounds good and it sticks. It is like flapjacks, a little indigestible but substantial and stays with you. It has a fleeting meaning understandable even to those who do not know exactly what it means. “Gunsel” suggests something funny or amusing, not pathetic at all but to be slightly pitied. The very sound of the word indicates such a picture. Just why this should be so cannot be explained- it just is.

Whoever invented the word could get meaning out of sounds like the Chinese, though it doesn’t have to be sung to disclose its meaning. “Gun” and “sel” by themselves mean little but combined into “Gunsel” the sound becomes picturesque. We know immediately it refers to the ridiculous.

Credited inventor of the word by the professional cowboys is John Bowman. Place was the Livermore rodeo about 1938. It is claimed some guy appeared with a decided bag in the seat of his pants. As he walked, observing eyes followed this bag in his seat which swayed in the breeze. Everyone watched it- fascinated. Just how a pair of pants could be made with such an “outstanding” seat was rather wonderful to behold. It began to be nosed around that it was some sort of effort to create a new style.

Cowboys are always suspicious of new things. They surveyed the baggy drawers from every angle. Some lay on their stomachs along the fence and watched them from a candid camera position, others looked down on them from the chutes. Various remarks were made but none seemed to exactly fit the situation any better than the pants fit their owner. It was a discouraging predicament for no word in cowboy language could describe them and they needed description badly. Then came light- it came quickly too. John Bowman had named them “Gunsel Drawers.” The new style had been created in a flash and with the style creation appeared “The Gunsel” or the people who wore baggy seated pants.

So, a new word was born and started to grow up from its obscure beginnings until now “Gunsel” and “gunselism” is an institution. It has spread all over the West and makes its bid to become part of the English language.

Often, inexperienced people confuse dudes with gunsels. This should never be done. The dude is separate and distinct. He is the modern version of the old-time “greenhorn.” He wants to learn and makes every effort. The gunsel is one who has had every opportunity to learn but can’t catch on. A gunsel is sort of a glorified dumbbell. This should be said with certain reservations for an experienced hand can do a “gunsel trick.” The more experienced he is the quicker he will be to admit his actions have been gunselite. When a horseman has done something wrong but was too lazy or hurried to do it right he has done a “gunsel trick.” This goes back to the original gunseleer who bought a pair of britches but the wrong kind. The tailor who made the drawers was also a gunsel tailor. He cut and sewed the pants but they didn’t fit.

Gunsels are not to be classed with “pilgrims” either. A Pilgrim is neither a dude nor a gunsel, he is a sort of tourist who believes he is the last man to see the old West. Pilgrims believe the West and Western ways are passing out and they want the thrill of being able to say they were in at the kill. Dudes are just the opposite- they want to help preserve the West and long to become a part of it. Gunsels are a permanent part of the West-can’t be gotten rid of. They just happen and must be lived with. They do everything wrong- mislead the dudes and pilgrims and fascinate the Westerners.

Nothing is more pitiful than the spectacle of a dude copying a gunsel in the belief he is taking on Western ways. It is a shame and a disgrace to the West, ·but nothing much can be done about it. Pilgrims are usually introduced to gunsels, on the other hand, and encouraged to cultivate them so they can be well tamped with the lore of the West. Some surprising things have happened when pilgrims and’ gunsels are gotten together. Dudes are usually steered away from gunsels if possible for it is not uncommon for dudes to graduate into first-rate hands if given time and correct instruction. Efforts to educate gunsels have proven a total loss to most well-meaning folks. They just don’t learn or if they do they learn the wrong way.

No one wants to be a gunsel. If a horseman gets an idea he is leaning that way he makes every effort to correct himself at once. Even good men can slip into gunsel ways for like the well-known halitosis and B.O. not even your best friend will tell you. The gunsel road is straight and easy to follow downhill.

The only known cure for gunselitis is the self-cure. Occasionally the afflicted party will get wise to himself. The best medicine is observation. If taken in large doses observation will get results. The gunsel must be certain he is not watching another gunsel however or he will get a relapse. This is very bad and seldom can be cured.

Perhaps we have painted too black a picture for really incurable gunsels are few and far between. Gunsel tricks however are common enough and few horsemen can avoid doing a “gunsel” once in a while. When a Westerner realizes he is guilty of a gunselism it acts on him like an emergency brake. He stops the works, goes back over the problem and decides what has been done wrong. He then sets to work to do the job right whether it be roping a calf or breaking a horse. Things get done right when gunselism is abhorred.