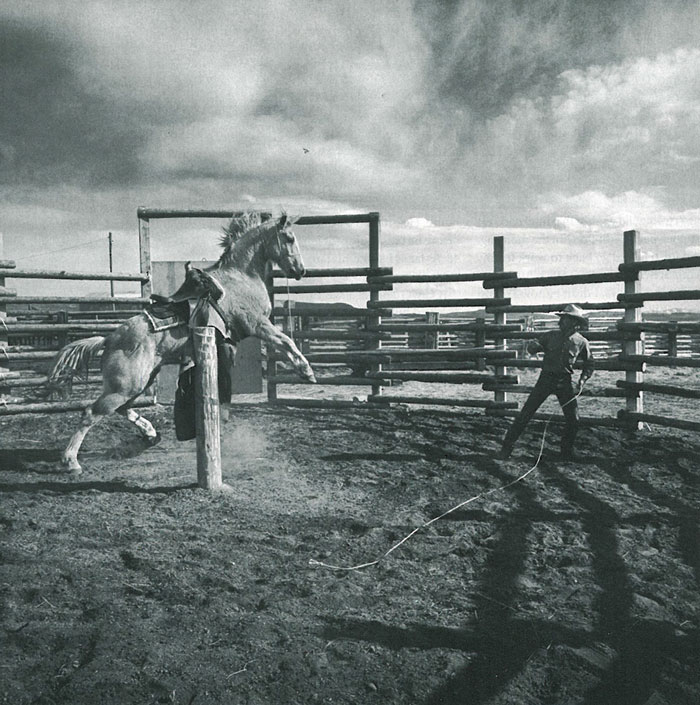 In Search of the Last Cowboy

Photographer Adam Jahiel embarked on a mission to document the buckaroo life.

Thousands of images later, he says he’s still discovering the secrets of one of America’s most unique cultures.

The term “daybreak” bears a loose definition on a buckaroo outfit in the Great Basin. For the cook, it comes around 3 a.m., when he rises to fire the stove and make breakfast. Next to rise is the horse wrangler, who saddles in the dark and rides into the black desert to jingle the cavvy. While he’s away, the rest of the crew stirs. No reveille of trumpets sounds, just the hiss of propane lanterns as they’re lit one by one.

The cowboys bide their time, waiting for the lanterns’ heat to warm the air inside the canvas tent walls. Finally, they dress and emerge, carrying lanterns in one hand and cigarettes in the other. Gathered in the cook tent, the crew is somber, few of them looking up from cups of coffee long enough to make small talk. Metal forks plow eggs across plastic plates as they wait for the sound of the wrangler and the saddle herd’s arrival.

The men pay little attention to photographer Adam Jahiel, who waits on the periphery.

Armed with a medium-format camera, Jahiel has created a body of work that documents nearly two decades of Great Basin ranching. He calls it “The Last Cowboy Project.” Every summer since 1989, Jahiel has traveled parts of Idaho, Nevada and Oregon, capturing images of the region’s cowboys, landscapes and historic ranches.

Today, his photographs number in the thousands and include portraits of buckaroos, horse roundups, summer brandings and tent camps in the middle of wide-open country. The pictures evoke a feeling of permanence for the buckaroo culture, seemingly rooting it to the soil like sagebrush.

Cookhouse Inspiration
The Last Cowboy Project was born on a summer day in 1989, when Jahiel – then working for The Sacramento Bee – was sent to a ranch on the California-Nevada border to shoot photographs of the famed rodeo bull Skoal’s Pacific Bell.

“After we drove around the ranch shooting photos of the bull, we ended up back at the kitchen for a cup of coffee,” Jahiel remembers. “I looked around inside the cookhouse and saw how stark and pared-down everything was. There was the obligatory table with red-and-white checkerboard tablecloth and a conglomeration of ketchup, mustard, Tabasco and toothpicks. The walls were whitewashed wood, and there was absolutely nothing fancy about it. In the other room, there was a couch that had been destined for the dump years before. Cowboy gear was everywhere and someone had drawn a crude bucking-horse illustration that hung on the wall.”

Jahiel felt like he’d landed in a picture by Walker Evans, one of his photographer heroes. During the Great Depression, Evans documented 1930s rural America for the Farm Security Administration (FSA).

“There was something incredibly compelling about those FSA images,” Jahiel says. “They’re technically perfect, and the subject matter had real historical importance. It wasn’t just eye candy. They were historical documents.”

Jahiel asked the ranch owners for permission to return and shoot photographs on his own time. They agreed and provided him with a letter giving him access to the many ranches they owned across Nevada.

“The first ranch where I spent significant time was the IL in northern Nevada,” Jahiel remembers. “I arrived and began taking photographs, even though I really didn’t know what I was doing. I kept my eyes open and mouth shut. I didn’t want to miss anything and just tried to stay out of the way as much as possible.

“After about 10 days of shooting, I thanked the cow boss, told him I’d gotten the pictures I needed and that I’d be leaving that morning. All he said was, ‘Okay,’ then rode off on his horse to go back to work.”

The departure felt anticlimactic, and as Jahiel packed up his gear, he thought about how difficult it might be to enter the closed-off world of the Great Basin buckaroo. Then, the cow boss rode back to Jahiel and said, “If you want to do any more shooting on any other ranches around here, you can use me as a reference.”

Jahiel had a foot inside the door.

“As a rule, these guys are poker-faced and men of few words,” Jahiel observes. “I had no idea where I stood with them. So, when the cow boss said that, it was one of the greatest honors I’ve ever received. That set everything in motion.”

Complete article was originally published in the March 2007 issue of Western Horseman magazine.