Years ago, Western Horseman’s pen pal list in its Junior Horseman section helped young riders connect in an era when handwritten letters took days to reach mailboxes, instead of the instant send of a text message.

In 1967, Lisa Perry lived in Vernon, New York, where her family had a small farm. They had a small collection of horses that included Honey, a big palomino, and Ginger, a Welsh Pony/Quarter Horse cross.

“My dad subscribed to Western Horseman, and I saw the Junior Horsemen section,” Lisa recalls. “I saw that people wrote letters and it seemed like fun.”

She looked through the lists of names and addresses of young people looking for pen pals and picked out several names. One was a girl named Kim Prentice who lived just an hour and a half away in Binghamton, New York.

Equally horse crazy, Kim didn’t have access to horses and sought out any connection she could, which included the Junior Horseman pen pal list.

“Every time my mother went grocery shopping,” Kim says, “I’d sit by the magazine rack and beg her to buy Western Horseman.”

Lisa and Kim began corresponding the old fashioned way: writing letters and waiting at the mailbox for responses to arrive.

In the summer of 1968, the pen pals finally met in person when Lisa invited Kim to her house for a weeklong visit. They rode Honey, who had a heart of gold, and Ginger, who had a mind of her own, and created memories neither would forget.

In the next 47 years, Lisa would marry and have a family. Kim would become an artist specializing in restoring carousel horses, and would raise and show Arabian horses. But they didn’t forget each other and were able to meet in person twice.

In 2015, they shared their 60th birthdays together and sent the magazine a photo of their reunion. As a birthday gift, Kim tracked down a May 1967 issue of the magazine that listed Kim’s name in the pen pal list.

“We are still Junior Horsemen at heart, after all these years,” Lisa says. “All because of Western Horseman magazine.” Kim adds, “Our love for horses has never gone away.” 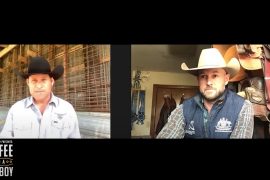