Want to know more about the 15 people chosen for Texas Ranch House, the Public Broadcasting Service’s reality program featured in this month’s “Living History?” Well, here’s your chance. Biographical information on each participant follows below. For more information on the series, scheduled to air May 1-4 on local PBS stations, visit www.pbs.org/ranchhouse.

Robby, 35, is a modern-day vaquero with Mexican and Spanish ancestry. His grandfather and great uncle fought with Pancho Villa during the Mexican Revolution. Currently, Robby is a cattle inspector for the U.S. Department of Agriculture, but ranching is in his blood. This ruggedly handsome cowboy owns a small ranch in a Texas town on the Mexican border, and is an experienced roper and horse trainer. Despite his busy schedule, Robby is ready to meet the love of his life, and achieve his dream of raising a large family on his own cattle ranch.

At 52, Bill’s the proud father of three teenage girls, and the husband of Lisa Cooke. The tightknit family lives in a suburban California home, where Bill recently worked as a controller at a hospital and is now an emergency services administrator. Bill’s ideal evening is coming home from a long day’s work and coaching his daughters’ softball team. When not on the softball diamond, Bill raises chickens in the backyard, and tends to the berry patch that gives his wife plenty of fruit for her homemade jam and preserves.

Lisa, 42, enjoys the challenge of raising three active daughters and being the drama ministry director at the family’s Baptist church. In her free time, Lisa’s an avid genealogist who’s researched her family roots, including some of her 1800s Texas ancestors. Her home office is lined with meticulously labeled scrapbooks that contain photos and memorabilia found across the United States and Europe. Lisa also is an accomplished baker.

At 19, Vienna is the oldest Cooke daughter, and the most reserved. But underneath that shy exterior lies a passionate young woman who’s an active pianist, cheerleader, softball player, singer and church youth-group leader. She’s a student at Las Positas Community College, where she’ll most likely follow in her father’s footsteps and become an accountant. To earn pocket money, Vienna works part-time at the local library.

Lacey, 17, is the middle child and a budding filmmaker. She loves to film family and church events with her video camera. She also loves rock-and-roll music and any chance she gets she goes to San Francisco to hear live music. Lacey also enjoys old movies with her mom and acting in school plays. You’ll most likely find Lacey in jeans and a T-shirt listening to her iPod or text-messaging her friends on her cell phone.

Hannah, 14, is the youngest of the Cooke girls and the most accomplished athlete. The walls of her bedroom are adorned with medals and trophies she’s won at her favorite sport, fast-pitch softball. As the pitcher, Hannah “throws a mean fastball.” She likes hanging out with her sisters, shopping with her mom and reading.

Johnny is the spirited Englishman in the bunch. At 22, he banters with the best of them, a skill he no doubt learned as a boarder at Eton College, the exclusive English high school for boys, which he attended for five years. Johnny recently graduated from the University of Bristol with a biochemistry degree. This upper-class Englishman excels at rowing, playing polo and poker.

A self-described skateboarding, rock-and-roll-playing computer geek, 30-year-old Jared is a descendant of Texan Benjamin Ficklin, a charismatic prankster who co-founded the Pony Express in 1860. Jared is adventurous and a nonconformist at heart who’s equally at home playing punk rock on his guitar with his twin brother as he is creating flash designs for the Web. Jared saw the Texas Ranch House experience as one that could turn him into a real Texan who’d make Ben Ficklin proud.

Maura is an intelligent and independent 25-year-old who recently started a Ph.D. in anthropology at Stanford University. She’s fiercely opinionated, well-read and well-traveled. A Washington, D.C., native, Maura hiked the Himalayas, lived in a mud hut in India and worked for the Peace Corps in West Africa. Maura is an accomplished equestrian, as well. As a teenager, she competed in hunter, jumper, dressage and eventing.

At first glance, Anders, 25, looks and sounds like the all-American kid who likes to ride horses, while in reality he came to the United States from Sweden as an exchange student when he was 16. He shares his Missouri home and five acres with his horse, “Girl.” While Anders hates studying, he’s close to finishing an animal science degree at Missouri State University. Anders has competed on his college’s equestrian team and plans to join the rodeo team.

Stanley is a rugged, boisterous 56-year-old who commands attention. Perhaps it’s his 32 years in the military, or his upbringing in the wilds of New Mexico, but Stanley likes to be heard. The retired colonel lives in New Mexico with his wife, Sheryl, and two teenage sons, Travis and Trevor, in an adobe house that he designed. There, Stanley has a few horses and raises some beef cattle. He’s also a certified welder and an experienced carpenter.

Ignacio is a tenacious character who’s faced and overcome some very real challenges in his life. From growing up poor in Puerto Rico to living on the streets of New York City, Ignacio has survived and triumphed, receiving a grant to attend New York’s Institute of Culinary Education. Today, getting up at dawn to cook for 200 people is a regular event for this 52-year-old chef. Ignacio lives in a New York apartment decorated with cowboy paraphernalia that he collects from auctions and eBay. Ignacio’s interest in the Wild West extends to a documentary he’s producing on black rodeo cowboys.

How does a kid who grew up in Los Angeles, California, become such an accomplished outdoorsman? “Simple,” says Ian. “I watched a lot of Bonanza growing up, and always wanted to escape my concrete backyard.” Ian, 22, now lives in Ohio. He recently completed a master’s degree in adventure education with an emphasis on cultural diversity, combining his love for the outdoors with his passion for teaching.

At 20, Shaun is the youngest of the cowboys. He grew up with his seven brothers and sisters in Vermont. Like his siblings, Shaun was home-schooled and taught to thrive in the outdoors. He loves to hike, fish, bike, ski and mountain-climb. Shaun also is an accomplished writer. He’d like to have studied psychology and writing along with his declared major, geology, but decided it was more practical to study rocks than Freud. Shaun currently attends Bowling Green State University in Ohio.

A 31-year-old Colorado elementary school physical education teacher and coach, and an avid runner, Rob saw this experience as a new outlet for physical activity. He’s no stranger to working outdoors, having spent his early childhood on a farm in Horton, Kansas. After his family lost the farm and lived in Kansas City, Missouri, for a few years, they moved to a ranch in New Mexico. Rob relocated to Colorado in 1992 to attend Adams State College. He and his wife, Michele, have been happily married for five years. 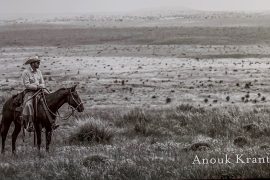 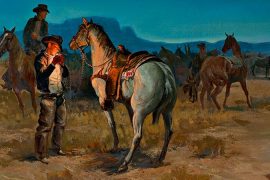