This western entertainer’s work rings true because he’s a longtime member of the brotherhood of working cowboys.

Beneath the persona that’s R.W. Hampton, cowboy entertainer and musician, lies a man who’s long since earned his place within the tightknit fraternity of working cowboys. These men and women have dedicated much of their productive lives to caring for horses and cattle on ranches, farms and feedyards everywhere.

Much of Hampton’s material evolved from his deep ranching roots. His legion of fans worldwide seems to sense that energy, that taste of freedom, which can be absorbed only by pulling the outside circle in a cold rain or riding back to camp tired and hungry only to change horses and head back out to finish the job. Hampton, Stead, New Mexico, did all these things, and as he related them during the following interview, it’s obvious he didn’t just pass through ranch country on vacation. He immersed himself in big-outfit cowboying from age 17 and didn’t quit for 15 years. By then he had a lifetime of experience, a wife and family, and a unique perspective that comes across loud and clear in his music.

WH: How did you begin your cowboy years?

RW: In 1974, I left my home in Richardson, Texas. Because I’d been a Boy Scout and an Eagle Scout, I hooked up with the Philmont Scout Ranch in the northeast corner of New Mexico. Technically, the ranch is owned by every Boy Scout in America, so I took my place there and started punching cows. They had a big Hereford herd and a bunch of buffalo running on 137,000 acres, so there was plenty of cowboying to do.

WH: You cowboyed steady for the next 15 years. On which outfits did you spend time?

RW: I spent most of my time in Texas, on the Spade Ranch and the Quien Sabe. But I was into drifting back in those days, and I wandered into Nevada for a peek at the IL and the Spanish Ranch. I liked it up there, met some great hands. Eventually, I spent some time at the LS Ranch back in Texas, and rode the grub line at the Bell Ranch in New Mexico, although they couldn’t find a hole for me to fill. The ZX needed a married guy, so I took my new wife there for a spell. That was back in the early 1980s. After that we went to Pickrel Land & Cattle Co. in Wyoming. When my time was up there, we drifted back to New Mexico, and now I’m on my own place, not 15 miles from the Philmont Scout Ranch.

Read the complete story in the October issue of Western Horseman. 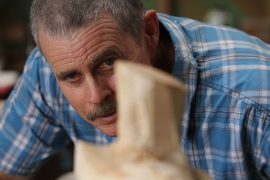