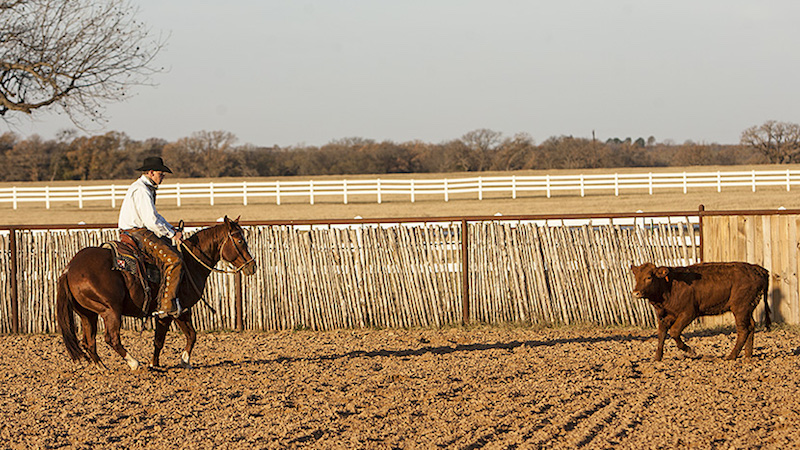 The computer age may be in full swing, but cutting-horse trainer Kory Pounds doesn’t use any kind of programming when training a cow horse. He believes that the wrong approach makes horses robotic when working cattle, tending to rely on cues from the rider rather than reading and reacting to the cow with cow sense.

Having earned nearly $1 million in NCHA competition, Pounds’ training approach apparently works. He credits much of his success and training philosophy to lessons learned while working for five-time NCHA Futurity champion Buster Welch.

When the cow stops, the horse must stop, landing in a position that keeps the cow engaged. Pounds doesn’t want the cow to relax when stopped, and he wants the horse to remain hooked and in position for the cow’s next move.

As cattle can be quick and unpredictable, it’s best for the horse to respond to the cow’s moves rather than wait for direction from the rider. But teaching that takes time.

“If the cow means more to them than the training, then they’ll always come back to the cow,” Pounds says. “There’s no substitute for experience. I don’t care how smart or cowy a horse is. It takes two years to train a contest cutting horse. And, really, we’re simply getting them to work a cow good.”

1 KEEP THE COW IN FOCUS

“All I want is control of their feet,” he says. “They need to be broke enough to where you can stop and turn them. When I sit down and take the slack out of the reins, I want their feet to come to a stop. I’m not asking them to hit a sliding stop. And whenever they get stopped, I want them to stand there on a loose rein.  That’s about 60 days of good, consistent riding.

“When I take slack out to back them, I want their feet to come right then. If they bend at the poll too much, put their chin against their chest and their feet don’t come, then I can’t ever get them in time with the cow.”

Pounds believes some horses are so thoroughly trained that it’s difficult for them to focus on the cow.  He prefers to introduce his horses to cattle earlier so that their movements are related to the cow, not to the rider.

“A young horse just needs to be shown the cow,” Pounds says.  “Maybe 90 days down the road you can start incorporating more training or mechanics. But by doing that too early, you teach them how to argue instead of how to learn.”

If at some point he has to address a basic issue, such as a failure to yield to the bit or move off his leg, Pounds makes sure he clearly steps away from the cow before correcting the horse.

2  SLOW DOWN
Pounds’ training philosophy echoes the slow and steady process that many horsemen advocate.  He’s learned to be satisfied with slow progress and to stay unalarmed by backward steps.

Pounds begins cow work by simply teaching the horse to follow a single, slow cow in a round pen. Once the horse is confident with that, Pounds brings a small herd into the middle of the pen, cuts a cow out and works it around the perimeter.  He spends months on this lesson, teaching the horse to track by walking and trotting in circles, and stopping and changing direction on his hindquarters toward the cow.

Pounds doesn’t allow the action to overwhelm his horse.  Also, he would much rather the horse learn to do its job at a slow pace, rather than fast.

“Speed is not good for a young horse,” he says. “I’d rather my horse try to outsmart a cow than outrun it. You can teach your horse to be a running-off idiot in about 15 minutes. But it takes two years to get them to work a cow using their head and their agility. A horse can’t do that if they’re only thinking about running.”

If the cow wants to run too hard, Pounds stops his horse and gets another cow.

“If the horse ever starts trying to overachieve, I pull up because he’ll scare himself,” Pounds says. “Horses these days are strong and athletic, and you sure don’t want one to hurt himself because he got in a bind trying to do right.”

3 CHALLENGE HIS MIND
Despite his patient approach and slow-paced training sessions, Pounds’ horses aren’t bored. His goal is to keep the horse’s mind busy at work.

“If you don’t challenge him, he won’t ever learn,” Pounds says. “He’ll get bored with it really quick.  When you start a young horse on a cow, you want to put enough pressure on the cow to get it to move, then let your horse feel that. Step to that cow nice and easy, and let your horse pick his ears up and learn to adjust to what the cow is going to do.

“I don’t teach a horse that big, 180 degree turn. And the only time I want him to make a 180 is when the cow pulls him that 180.  It’s easy to ride your horse so far to one side of the cow that it finally goes the other way, and then just whoop the horse all the way back to the other side of the cow.  But all you’re teaching him is to go right and left. You’re not teaching your horse to work a cow. A lot of horses get resentful about that.”

Pounds wants his horses to learn the basics: moving toward the cow’s hip drives it forward, and stepping to its head makes it stop and change directions. Some cows require more pressure before they move, but Pounds still doesn’t want his horses to take any unnecessary steps.

“You don’t ever want to be more active than the cow is,” he says. “The way to keep a horse mentally challenged is to take your time, step your horse to the cow and let him learn where it’s going to go. If you step to a cow’s hip, the horse needs to be ready to pick himself up and go with it. And when he steps to its head, he needs to know that it will stop and he needs to be ready to turn back. You shouldn’t have to be telling him that.”

4 POSITION HIM PROPERLY
As the horse advances in its training, it begins to sense a cow’s pressure points. Some cows are more sensitive than others, and some horses project more pressure than do others. Pounds wants his horses to learn where to position themselves to keep the cow engaged and on the move.

A horse engages and controls the cow by positioning itself behind or even with the cow to drive it, or slightly ahead to turn it. The horse’s distance from the cow also affects the movement.

“I’m riding a 2-year-old mare that’s still searching for the right position on a cow,” Pounds says. “It’s where she can travel to a spot so the cow can stop, but still have momentum. So when the cow is stopped, the mare has ahold of it. And if it starts to turn, she’s in position [to turn with it].”

When working a cow in a round pen, the horse can work close to a slow cow on the perimeter of the pen, or move to the inside and farther away from a faster cow, all the while staying even with it. Pounds wants his horses to figure out how close to be, depending on the cow and the horse’s ability.

Pounds says that it’s common for riders to allow their horse to fade away from the cow. They may be even with the cow, but their horse and the cow aren’t engaged, and that affects the cow’s energy level and momentum.

“When the horse quits cowing, the cow feels that,” Pounds says. “They feel the pressure, or the lack of.  The horse doesn’t need to crowd the cow and create his own difficulty, but he needs to keep momentum and rate.”

5 TAKE TIME TO THINK
In the midst of so much action, Pounds always allows the horse time to stop and read the cow. Those breaks in the action, no matter how brief, are the most crucial aspect to his training program.

“I ride my horse to a place to make the cow stop. The cow is probably going to stay there a second.  When the horse stops and gets his feet set, man, I just sit there.”

This allows the horse to regroup and pay closer attention to the cow. Pounds stops for thinking time every time the cow stops, reverses direction or fades away from the horse.

“Anytime the cow takes pressure off me, I stop and give my horse thinking time,” he says. “It might be for only a split second. And if my horse stops out of position, I give him a split second of thinking time.  Then I get him in the right position and give [thinking time] right back to him. You can’t run it all together.”

Pounds says it’s obvious when the horse is focused on the cow.

“I look at a horse’s ears a lot,” he says. “I’m training a mare now that’s fine when you’re walking or trotting around in the round pen.  But when you stop, she gets rigid and cocks her ears at me, like she’s ready for something to happen.  When I work her on a cow, I do not quit until every time she stops, she’s got her ears pricked, hunting that cow. I feel her soften her body and soften her neck. There’ll be a day when she won’t brace up, and all her focus will be on that cow.”

6 READ AND RATE
The end result, as Pounds described earlier, is that the horse will “work a cow good.”  For a horse to stay in sync with a cow, it must be able to both read and rate the cow’s every step.

“Rating is key,” Pounds says. “Horses have to rate a cow to a stop, rate a cow through the turn and rate a cow out of [the turn].  A cow is sometimes going to try you in the middle of a turn, so a horse has got to rate.”

Pounds added that riders shouldn’t be eager to cue their horse into the next gait when tracking a cow.

“Transitions are so important for a young horse to learn,” he says. “When you start him on a cow, he needs to walk, trot, extend at the trot, and then lope. If he should be trotting, but he’s loping, the cow will outstop him every time. So the horse needs to come back to a trot before he stops. A young horse is just not strong enough, physically or mentally, to handle coming from a high lope to a big, sliding stop.

THE BASIS OF POUNDS’ TRAINING requires that horses have some level of cow sense and a desire to hook onto one. But even those that are minimally drawn to cattle can develop into savvy cow horses.

“If they’re lacking a little cow, then you just have to feed them a little more cow,” he says. “Keep stepping them to that cow, and when it moves, go with it.  But let the cow do the training, instead of you.”

Ross Hecox is a Western Horseman editor.  Send comments on this story to [email protected]