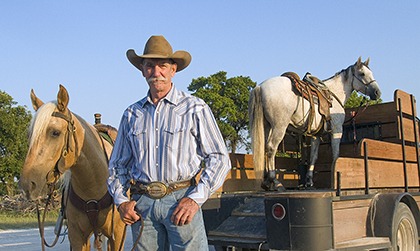 Bobby Kerr grew up in Canada, and started riding when he was a boy. After working for other horsemen and horse owners for a number of years, he went out on his own, training cutting, reining and roping horses in Hico, Texas.

In 2010, Kerr attended the Extreme Mustang Makeover in Fort Worth, Texas, and decided to compete the following year. He earned the Fan Favorite award with his Mustang Poncho in 2011, and in 2012 won the Legends division and the Fan Favorite honors with Maypop. He now uses both horses in his rodeo act, and is preparing two Mustangs for the Mustang Million competition in September in Fort Worth.

Q: We have a 4-year-old gelding and 6-year-old mare. We also have a 4-year-old miniature horse. When we take the mini out, the gelding gets a little crazy and he runs around the pen. We have been told this is natural. Is there something we can do to so we can take the mini out to drive without the gelding acting up? Also the mare has not been worked for 2 years. Would it be a good idea to have a professional work with her to get her back to riding form? Randy, Nebraska

A: Yes, it is natural. It sounds like they have buddied up. Depending on your facilities, you might try separating them, maybe just in the daytime. See how they respond. I’ve had some like that, but when I separate them they usually get over it. It’s just like weaning a baby. You need to be separating them on a consistent basis or permanently, not just when you take the mini out.

As for the mare, it would depend on how broke she was two years ago when she was laid off. Having a pro start her back might be your safest way.

Q: I recently went on my first organized trail ride with my Quarter Horse. I have taken him with small groups before, and he did fine. But when we got to this ride with hundreds of horses, and went riding with a big group, he had trouble focusing on me. He was worried about keeping up with the other horses, particularly the horse we hauled with. He kept tuning me out, and there were times I wasn’t sure I had good control of him. What advice can you give me? Sharon, Illinois

A: This can be a tough one. It’s hard to correct your horse and enjoy the trail ride at the same time. The first thing is to make sure he isn’t fresh before you head to the trail ride. Also, you are probably better off ahead of the horse you hauled with, at least for a while.

Try to stay out of everyone’s way, and give him a job during the ride. Trot him around, stop him, back him up, turn around, etc., and then get back in there and see if he’ll settle down and walk. He should figure out it’s a lot easier to relax and walk. A horse like that can make for a long day. It all comes down to being well broke and respectful.

Lots of times when I’m exercising I’ll ride one horse and pony the other, making the horse I pony stay back in a trailing position. That also might help. Good luck, my friend.

Q: My horse has gotten really hard to bridle and sometimes even throws his head up when I go to put his halter on. He’s fine once I get the bridle on, so I don’t think it’s his teeth or anything hurting him. He seems to just be resisting me. He doesn’t run away from me in the pasture or in his stall. I can catch him and put a rope around his neck easily. It’s just when I start to put anything on his head. What advice would you give me to solve this problem? Sandy, Kansas

A: If you’ve got a horse that’s getting hard to halter or hard to bridle, and resisting by throwing his head up or away from you when you’re trying to put the bit in, you’ve got to back up and go to when you were getting the horse halter-broke and teaching him to give to pressure. Sometimes we forget about going back to the basics, but they are important. When I am just haltering this horse, trying to get him to come back to me, give his head and be flexible, it’s a pressure-and-release deal. If he goes to moving, I’m just going to stay with him until he gives. Remember, what you do on the left you’ll need to do on the right. If your horse is throwing his head up, it’s the same thing; I would pressure him down by putting my hand between his ears and holding it there. When he gives me just a little release, I let go. He’ll figure it out to get that release.I did this the first few days with my Mustangs, but after 60 or 90 days I forget about it like everybody else. You can teach a horse pretty much anything if you take the time to do it. That’s what we forget to do, is take the time. Sometimes you feel like you’re not getting much done, but I guarantee you, it’s all worth it. We’ve just got to remember to do it. You’ve just got to take the time. Spend that time and you should be able to move them anywhere, and get your horse to stop resisting being haltered or bridled.