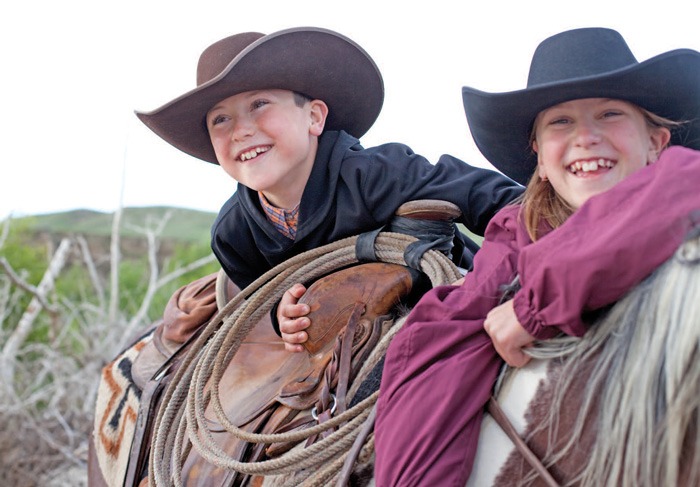 Understanding the health benefits of the child-horse relationship can influence how kids are raised today.

Parenthood makes a person see the world differently. Take horses, for example. I’d always assumed that when the day came, I’d raise my kids in the saddle. I imagined the fun we’d have riding in the mountains. But with the arrival of my first, a daughter born last fall, I realized that picture was incomplete. I wanted to understand how horses affected children down to the cellular level.

A new wave of research is confirming what horse folks have long suspected: A child raised in the saddle is healthy in mind, body and spirit. For example, consider the difference between the health of a kid munching on celery sticks as he rides down the trail, and one whose fingers are coated in Cheetos powder while he plays video games.

In 2005, journalist Richard Louv wrote the book Last Child in the Woods, in which he coined the phrase “nature-deficit disorder.” Louv suggests that a correlation exists between children who don’t spend time outdoors and the United States’ statistical increase in childhood obesity, depression and attention disorders. The phenomenon might be a downside of the Internet age.

“Western society is sending an unintended message to children: Nature is the past, electronics are the future, and the bogeyman lives in the woods,” Louv wrote in an article published in National Wildlife magazine.

Harvard University researchers have taken the idea one step further, suggesting that childhood adventures of the Huck Finn variety affect brain development. Their study shows that outdoor pursuits biologically shape the brain, creating “lifelong impacts on learning, behavior, and both physical and mental health.” In other words, kids should be turned loose to raft down the Mississippi River or lope down a backcountry trail, whichever is their pleasure.

The wild-child theory even holds up under the scrutiny of a microscope. Microbiologists are discovering that human health depends on our interaction with another “wilderness”—that jungle of bacteria inhabiting our intestinal tracts. The lower intestine, or gut, is a sort of ecological universe inhabited by 100 trillion bacteria, forming what’s called a “microbiome.” Thanks to American Gut, a citizen science project for which people submit samples (skin, mouth, stool) for analysis, researchers can map our collective intestinal tract to study what those bugs are up to down there.

Turns out, they’re up to a lot.

Humans evolved with bacteria, benefiting from a symbiotic relationship. We give them room and board; they provide valuable services, such as helping to digest complex food sources; producing neurotransmitters (e.g., serotonin), enzymes and vitamins; and generally bolstering our immune and metabolic systems.

There is much research to be done, such as answering the question: Where does each bacteria come from? We know that some are passed through mother’s milk, physical touch between humans, and contact with the natural world (things we touch, taste, breathe and eat). And perhaps the most interesting source of them all—for horsemen, at least—is through our interaction with domestic animals.

A study in Denmark determined that children raised around agriculture suffered 50 percent fewer cases of asthma and allergies. The research contradicts our understanding of germ theory, pioneered by Louis Pasteur. But a new line of thinking called the “hygiene hypothesis” says that rural children, through contact with soil and livestock, obtain valuable bacteria that help develop their immune systems.

But there’s a problem.

In The New York Times article “Some of My Best Friends Are Germs,” food expert Michael Pollan writes that as a civilization, “we’ve just spent the better part of a century doing our unwitting best to wreck the human-associated microbiota with a multifronted war on bacteria and a diet notably detrimental to its well-being.”

He means that in the West we take too many antibiotics, eat too much processed food, and are too quick to sanitize environments that should be valuable points of contact with bacteria. The situation is so severe that the stomachs of American kids are in worse shape than children in developing countries. Comparative studies of the United States, Bangladesh and Burkina Faso (in West Africa) show that the average American city kid had the most impoverished digestive tract. The reason is our health system’s reliance on antibiotics (on average, U.S. children receive up to 20 antibiotic treatments before age 18), the American diet of processed foods, and a lack of exposure to healthy bacteria.

What’s to be done?
Pollan urges people to eat fermented and fiber-rich foods that nourish the microbiome. The National Wildlife Federation is promoting a campaign for kids called “The Dirt on Dirt: How Getting Dirty Outdoors Benefits Kids.” And Louv argues for something just short of a cultural revolution.

“We need a nature-child reunion,” Louv wrote. “I am not suggesting that we bring back the free-range childhood of the 1950s. Perhaps those days are over. But we can create safe zones for solitary nature exploration. We can weave nature experiences into our classrooms, and nature therapy into our health-care system.”

For horse owners, the answer is simple: Keep trail riding, and make sure your diets feed the wilderness within.

This summer, my daughter can barely crawl, let alone sit in a saddle. Yet it’s already imperative she interact with horses. Last winter, at daycare, she contracted a nasty bout of pink eye, a chest cough, and dual ear infections. Her condition, our pediatrician advised, warranted antibiotics, and so we watched her delicate microbiome get deposited into a diaper.

According to Michael Pollan, we can rebuild her inner wilderness by feeding her fermented foods and exposing her to “dirty” environments. So we feed her yogurt and mashed avocados. We set her on every horse we encounter, allowing her to run her hands through their manes without running off to wash her hands the next minute. And when we go to the rodeo next Fourth of July, we’ll walk through the stock pens where she can breathe deeply the musty smell of horse and cow microbiome. And maybe, if she’s lucky, we’ll set her on the ground to play in the sand and hope that nobody from Child Protective Services is around to get the wrong idea.