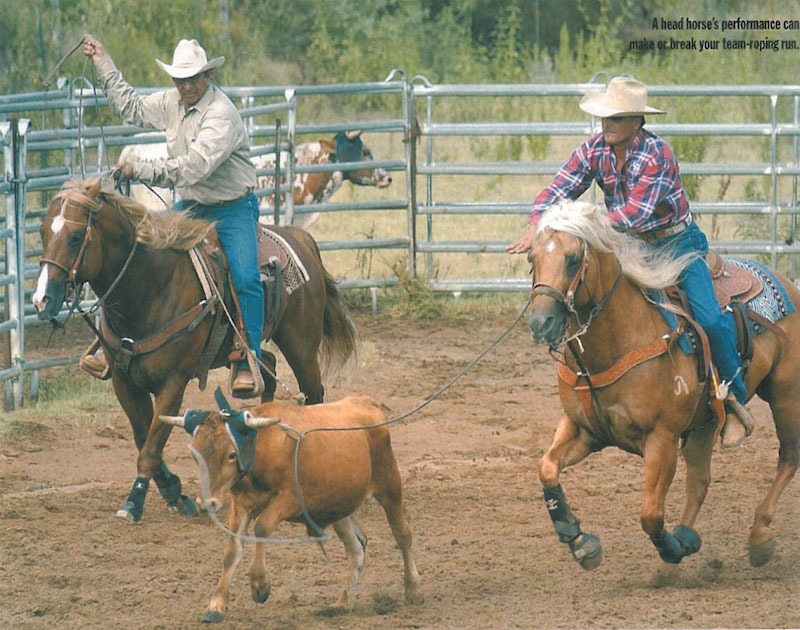 Heading in the Right Direction

Abel and A.J. Garcia explain how to head off two heading problems in the roping arena.

When a heading horse becomes patterned, or learns the roping routine, world champion rope-horse trainer A.J. Garcia, of LaVernia, Texas, notices two common problems. First, once the header ropes the steer, his horse hears the heel rope, anticipates facing the steer and quits pulling the animal. In turn, the steer stops hopping, making it difficult for the heeler to finish the job. Second, the head horse anticipates the turn, drops his inside shoulder and ducks to the left prematurely, forcing the rider to stretch to make the catch and impeding his ability to position the steer for the heeler. Both mistakes can be costly and destroy a run, but with regular tune-ups you can nip them in the bud before they require major retraining.

“Your horse is like a pickup,” A.J. explains. “If you don’t ‘service’ him regularly, he won’t run properly, and minor problems build until they become major ones. Go back to foundation exercises and work on your horse’s handle, so he listens to you, rather than doing what he wants; you don’t always have to make a com­petitive run.”

“It takes dedication to keep a rope horse tuned,” adds A.J.’s father and fellow horseman, Abel. “But you get out of your horse what you put into him. Perfect practice makes perfect, not just practice.”

A.J. and his father both train horses near Seguin, Texas. Abel focuses on developing strong foundations in young horses through communication and understanding in the round pen, while A.J. specializes in finishing and campaigning roping, reining and working cow horses. Each horseman has his own operation and techniques, but both programs complement each other.

Here the Garcias discuss the two heading problems mentioned above, and offer a tune-up for each. Plus, Abel explains how to keep your horse supple with simple flexion exercises. Before you perform these maneuvers, the Garcias recommend that your horse have strong foundation skills.

“The foundation of a rope horse includes being able to rate, stop and turn, as well as having an overall handle on him,” says A.J. “With a strong foun­dation, your horse will be so much easier to ride and correct than if he hasn’t had that training.”

Your horse is a reflection of you and your training,” Abel adds. “He learns what you teach him. There aren’t problem horses; human errors create the problems.”

Ideally, when you rope the steer’s head, your horse will turn left, pulling the steer in alignment for the heeler. Occa­sionally, however, your head horse might try to face the steer as soon as he hears the heel rope, or he might stop and refuse to pull the steer. If either sce­nario happens, immediately correct the problem before it becomes a habit.

“It’s not always that your horse is quit­ting,” A.J. explains. “Sometimes, he anticipates what’s going on and stops pulling. Or, there’s too much weight for him to pull. People usually rope heavy steers in the practice pen, because that’s what they have around, and the horse doesn’t get any relief whatsoever.”

When a horse quits pulling, the person typically starts to override. “The rider gets up and over the horse, and kicks and spurs to force him forward,” A.J. observes.

“What’s more, the rider also might pull back on the reins,” Abel adds. ”That’s like driving with one foot on the accel­erator and one on the brake.”

These are the worst things you can do, because the horse loses his confi­dence and quits trying. Instead, both horsemen recommend going back to your horse’s foundation, striving to do things smoothly and correctly, while allowing your horse to experience a pressure release.

“Don’t go 100 percent each run,” A.J. advises. “Slow down and make your horse work correctly. Listen to him with the understanding that he needs to feel a release. If you put pres­sure on your horse all the time, he’ll try to find a way out.”

“The horse learns from the release, not the pressure,” Abel emphasizes. “If you correct the horse and release the pressure, he’ll learn to do what you want.”

To correct a horse that refuses to pull, the horsemen recommend breaking from the box, roping the steer’s head and dallying as you’d normally do for a team-roping run. However, quickly release your dallies, hold the rope in your hand and allow the steer to go to the end of the rope. Then pull the steer a few strides and turn it.

”The release lets the horse know there’s relief at the end of the hard pull and allows him to move freely while pulling the steer,” A.J. explains.

With repetition, the horse gains con­fidence in his pulling power.

The Garcias want their heading horses to work off their hindquarters throughout the roping run, because a horse’s power is derived from his hind end.

“Your horse’s back feet operate his entire body,” Abel says. “If you can get his back end moving, his front end will follow.”

The horsemen also want the horses to take their cues from the rider. ”Two qual­ities that make a rope horse are control­lable speed and the ability to work off his hindquarters,” A.J. notes.

Performing such foundation maneu­vers as stops, rollbacks and flexion exer­cises are good ways to promote flexibility, which enhances the horse’s body collection. Steer-stopping is another method to practice collection. It’s also a way to encourage your horse to stop and set up squarely, and reinforce that you’re the pilot, if he starts to drop his shoulder and turn prematurely.

Steer-stopping starts out like scoring a slow steer. Unlike scoring, however, you head the steer, then stop the horse straight. Release a slow steer from the chute, allowing it to go about a quarter of the arena. Try to keep your horse calm and relaxed so he doesn’t think he always must break from the box when a steer is released. When the steer reaches the quarter mark, allow your horse to exit the box, rating his speed until you head the steer. Allow the horse to take a couple of forward strides, then dally and stop. Keep your horse at a standstill for a moment, using your reins and legs to keep him straight. For example, if he starts to move to the left, anticipating the turn, put your left leg against his side and neck rein him to the right, “closing the gate” on the left turn.

“Your legs should stay just as busy as your rein hand,” A.J. says. “Your reins are good to control your horse’s front end, but you keep the horse underneath you with your legs.”

According to Abel, balance is the bottom line in team roping. If you and your horse aren’t balanced, you won’t be able to get the job done safely or efficiently. Con­sistency in practice and competition is the second major key to success.

“Balance and consistency, combined with communication and understanding of your horse,” Abel says, “will take you to the pay window more than speed and skill any day.”

Article originally published in the June 2006 issue of Western Horseman.

Stopping the Clock For Good Times