Light in the Bridle

Neck-reining is just one step toward getting in sync with a saddle horse. For a rider, achieving a greater degree of control is about measured progress and communication with his mount.

</MCC PHOTOTABLE> Horsemen often refer to a horse as being “light in the bridle,”one of many terms used to describe a high level of communication between a horse and its rider. Current trends focus on subtlety as the basis of this unique relationship, and talented trainers are becoming masters at honing this fine edge. Creating a light horse can be a challenging and rewarding process, but it takes time.

In the horse world, references to “neck- reining”are tossed around like a softball at a church picnic. Sooner or later, everyone uses the term in some context, usually to describe the capabilities or shortfalls of a particular horse.

Equine history is brimming with references, statues and tomb paintings of horses performing a multitude of functions. Centuries ago, in peacetime, it might’ve been common to encounter a rider with both hands firmly grasping the reins, but the necessity of war called for minimizing the effort put into two-handed reining, and redirecting some of that energy into handling a weapon.

From horseback warfare was born the complex choreography of dressage, from which we learned to use the lower body to compensate for that weapon-carrying hand. Thankfully, huge battles involving thousands of charging warhorses are things of the past, and our free hand no longer wields a weapon in the pursuit of glory. Today, it’s free to swing a rope or open a gate.

How does a horse get good at neck- reining? Repetition is part of the equation, but it doesn’t account for all of it. Performance-horse trainers can rely on a structured set of training exercises in the controlled environment of an arena.

A working ranch cowboy, though, doesn’t have that option because most of the time he’s got a cow standing in front of him that needs tending. With his attention on the cattle, and one ear cocked toward the cowboss, the cowboy learns to handle the reins automatically, on a subconscious level. He has to, because there’s just too much else happening.

For the rest of this article, see the October issue of Western Horseman. 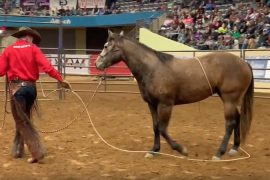