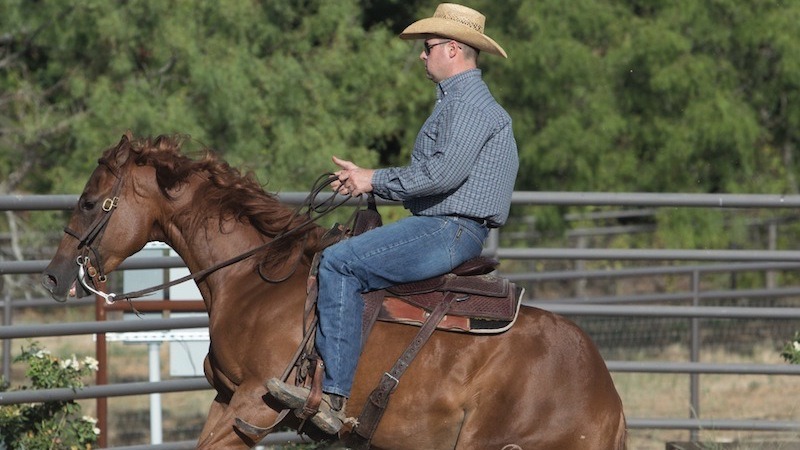 Straight Ahead: Trey Pool on Using the Fence

Reining trainer Trey Pool uses the fence to teach his horses to run straight and true into a stop.

Straightness is necessary in any horse, whether it’s competing in ranch riding or traveling across a pasture. But nowhere is it more vital than in the show pen, where horses are asked to run—accelerating along the way—into a big sliding stop in reining and reined cow horse classes. Reining horse trainer Trey Pool incorporates what is commonly called “fencing”—loping or running down the arena and stopping at or near the fence— into his training routine to help his horses understand straightness.  The exercise isn’t really about stopping at all, Pool explains.

“Fencing is something I do after I teach a 2-year-old to draw [into the bridle] and have my stop in place,” he says. “With fencing, I’m making sure that horse will run end to end [of the arena], balanced. I just want the horse to stay balanced, stay between the reins and keep moving forward until I ask him to go to the ground and stop. In a nutshell, that’s what we’re trying to do when we’re fencing.”

Pool, based in Weatherford, Texas, follows a consistent routine when using the fence to help teach the rundown, and tackles common problems with a steady hand. And he doesn’t worry as much about the stop as he does the approach to it.

“It’s a balance,” he explains. “If they’ll run all the way to the fence I really don’t care what they stop like when they get there. I’m not working on stopping; I’m working on running.”

First-Time Fencers
Once he has developed a soft feel on a 2-year-old, and has the horse stopping consistently, Pool begins using the fence as a training tool. But he says young horses often stop too hard the first few times in self-defense.

“If you’ve done a nice job up until the time you start fencing a 2-year-old, he trusts you, he believes you, so he’ll go down there and wait on you, and wait on you, and then he goes, ‘Oh, gosh, there’s a fence,’ and parks it big,” he says. “And everybody thinks you’ve got a big stopper. But it was because he had no idea you weren’t trying to crash him into a wall, so he stopped out of self-preservation.”

After a few times, that colt usually will start slowing down in anticipation of stopping, so Pool will ask for a reduction in speed halfway down the arena, effectively beating that horse to the punch.

“Instead of waiting on that horse to back off, I’ll lope down and might take ahold of him about the middle of the pen,” he explains. “If he feels soft and stays between my hands, I might keep slow-loping toward that fence. And when we get there, no matter what he does it’s not wrong. He might go left or right a little, and I’ll hold him a bit until he gets settled, and then I might just walk him around and soften him up, and then go the other way.”

Pool continues the exercise until the horse gets to the fence straight, stops, and waits on his next cue.

Reminders to Rate
Reining patterns call for a gradual acceleration into the stop. Some horses, especially older ones, will either accelerate suddenly halfway down the arena, or start out fast and then begin slowing down at the midpoint. Both types of horses need to learn to rate, Pool says.

“On a ‘feelier’ horse that remembers things, you might run down there and he sets up before you get to the fence. His face gets sticky, his front feet get sticky. He doesn’t want to run into that fence,” he says. “The more I feel a horse rate back and not want to run to the fence, the more I let the fence stop that horse. I’m not going to run him up there and say ‘whoa’ and take ahold of him.”

Other horses might get a bit pushy about the rundown.

“The more I feel the horse freewheeling through there and not really paying attention, the more I’m going to have to stop that horse when I get to the fence or before,” Pool says. “I need to keep tightening those brakes. But I never throw away my rundown either to get to the fence and get stopped, or to stop [before the fence]. A good rundown makes for a great stop, and I never waste a good stop on a bad rundown.”

The trainer points out that it all comes down to balance.

“Whenever we’re going back and forth between the fences, everything is about balance,” he says. “If I’m pushing that horse harder than I’ve got ahold of him, I want him to keep rolling forward. If I take ahold of him and stop driving, he needs to come back to me.”

Clear Signals
The National Reining Horse Association rulebook calls for a horse to be “willingly guided.” Pool expects his horses to learn to rely on him for instruction, and it starts when they’re 2-year-olds.

“I want to always have control and be the one who initiates [a maneuver]. I want the horse to look for me for what he should be doing,” he says. “So if I know a colt is going to slow down [going toward the fence] it’s more advantageous for me to take ahold and slow him down, so that we practice the right things.

“I’ll trot him up there into that fence, keep him free, let him stop, and then we’ll turn around and do it the other way. If you do that for a day or two usually those colts will free up and lope up into the fence, and we’ll start building from there. Once he gets confident that he’s going to run straight from A to B, I’ll lope off and put my hand down, and let him initiate a little bit of that build [in speed] on his own.”

“One thing I see that gives people trouble is that they’ll lope off slowly and put their hand down, but their horse builds a little bit of speed and they just pull him into the ground right there,” he says. “At that point you’re working on stopping; you’re not working on maintaining rate. [At a show] I can’t pull him into the ground and then lope off again. Why would I practice something that’s not going to do me any good?”

Instead of stopping, he looks at this as a chance to remind the horse to rate and wait on his signals.

“I’m not going to hold him the whole way down there if he rates. I’m going to set my hand down,” Pool says. “But if he goes to build speed again, I’ll rate him again. I look at those situations as opportunities. Every time I get an opportunity like that I get a chance to build a little better horse, a little more experienced horse.”

And again, he cautions against worrying too much about the stop instead of the rundown.

“The main thing I want to build in a horse is when I turn the corner [in a pattern] and get him squared up, I can set my hand down and he follows that set of reins like a train track.”

This article was originally published in the October 2016 issue of Western Horseman.

Why Tell Edgmon Rides His Show String Outside