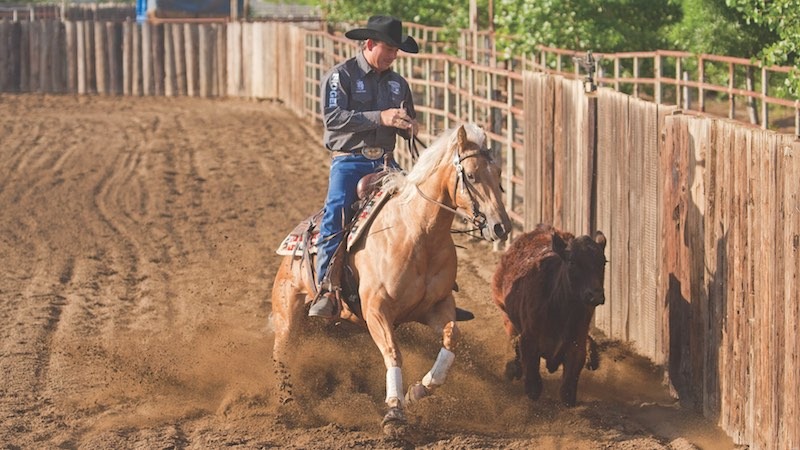 Initially, Jake Gorrell wondered whether reverse psychology was at work in his new training technique for correcting unbalanced movement. That’s because he was essentially doing the opposite of what he thought he should do.

No matter the discipline or training program, many horses at some point begin leaning and don’t travel in a straight line. Whether running barrels, loping circles, roping steers or working a cow, a horse needs to keep its hind legs driving beneath its body and not lean too far to the left, right or forward.

“A horse has to get on his hocks to do something,” says Gorrell, who trains reined cow horses in Hanford, California. “Whether he’s running to a stop, running to a turn or running around a barrel, to me it’s all the same. It’s all about being balanced. Balance is straightness.”

A horse often begins dropping its inside shoulder while loping in a circle, and a common way to lift the shoulder is to bend the neck with the inside rein and apply the inside spur. Gorrell found limited success with that approach.

“A lot of horses like to drop their shoulders in, and their hips falls out a little bit,” he says. “I used to pull the nose in and push the shoulder out. But once I fixed that and then turned the horse loose, the shoulder dropped back down. I couldn’t figure out what was going on.

“I thought, ‘Well this isn’t working,’ so I tried the opposite. I pulled their noses to the outside, pushed the [rib cage] to the inside, and made them lope around like that. When I turned them loose, they stood up straight and loped around nice.

While counter-bending, Gorrell kept the horse in the correct lead for the circle. By momentarily loping with the horse’s nose tipped to the outside and the trainer’s outside leg creating an inverse arc in the horse’s rib cage, Gorrell adjusted the horse’s movement. Once he released the rein and outside spur, the horse immediately straightened its movement, aligning its frame and feet with the arc of the circle, and driving forward with its hindquarters.

Gorrell also tried the technique while running down the fence to turn a cow. If the horse leaned to the left toward the cow, he lifted his right rein and used his right leg to push the horse’s rib cage into the cow. If necessary, he went so far as to pull the horse completely off the cow, stopping and spinning a circle to the right before returning to the cow. After making the correction, the horse squared its shoulders and rated the cow with its weight on its hindquarters.

“So I thought, ‘Well, is it reverse psychology? Are they just doing the opposite of what I told them?’ ” he says with a laugh. “It was just trial and error. “But you have to think about what part of the body is causing the lean. I think a lot of times we don’t have control of the hip. And when the hip hangs out, the shoulder drops. You can lift the shoulder [with the rein and inside leg], but if you don’t fix the [back end], your hand is all that’s holding it up. So as soon as you drop your hand, the shoulder is back down.”

Bending the horse counter to the direction of travel, or counter to the cow, helps engage its hindquarters. Shifting the weight onto the back legs and aligning movement is crucial for high performance.

“Any time a horse needs to get on his hocks, he should have the same amount of weight on both of them,” Gorrell says. “So when you’re going down the fence and stopping with the cow, in the initiation of that stop the horse has to be balanced.”

Gorrell adds that whether a horse is turning a cow on a fence or rounding a barrel, leaning into the turn shifts its weight onto the front legs. And that’s trouble, especially when a cow horse is stopping and trying to step with its inside front leg.

“All the weight goes on the outside front leg,” he says. “If that leg happens to buckle, down they go. If you stop evenly on the hocks, you have the strongest part of the horse’s body taking the bulk of the weight. Then the horse can rock back through that turn and stays in a better position on the cow.”

Balanced movement also promotes soundness and makes it easier for the rider to stay in the saddle, he adds. Gorrell says it’s important to recognize which part of the horse’s frame falls out of alignment. For example, sometimes a horse drops its shoulder to the inside but points its nose to the outside. Still, counter-bending often fixes the problem.

Gorrell adds that he wants his horses to ultimately work balanced and straight on their own, so he tries not to micromanage them with his reins and feet.

“I’ve learned to put my hand down and see what happens,” he says. “My goal is for them to work in auto. They need to do it on their own. Allow them to make mistakes, and make them accept responsibility.”

This article was originally published in the February 2015 issue of Western Horseman.