The Working Ranch Cowboys Association World Championship Ranch Rodeo brought the ranching community together for a weekend of rodeo, shopping and showing.

Twenty ranches from eight states traveled to Amarillo, Texas, for the Working Ranch Cowboys Association (WRCA) World Championship Ranch Rodeo held November 7–10. The event, now in its 24th year, is a favorite for many in the ranching community not only for the ranch rodeo but also for its trade show, entertainment, horse show and more. This year proved another success with unforgettable moments.

When the Ranch Goes to Town: Cowboys traveled to Amarillo to compete in Ranch Horse Association of America classes. Among the winners was Robert Forst of Oklahoma, riding Seven S Indian Maid in the senior horse class. Forst also won reserve in the junior horse class on Seven S Cats Meow.

Watch Me, Whip: The buzz around town was about the talented Whip Peterson. The handy 15-year-old was part of the Hatchet Ranch and Willows Ranch team.

Ranch Bronc Arena Record: Justin Peterson, of Haywire Cattle Company, broke an arena record in the ranch bronc riding with a score of 85.5.

Top Honors: After scoring the arena record in ranch bronc riding, Justin Peterson of Haywire Cattle Company was named top hand for the second year in a row. Top horse honors went to Ima Wynna RAB, owned by Rob. A. Brown and ridden by JoJo Lemond. 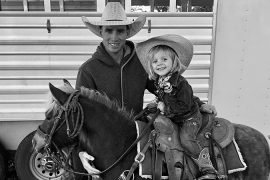 Top 10 Shots from the NFR