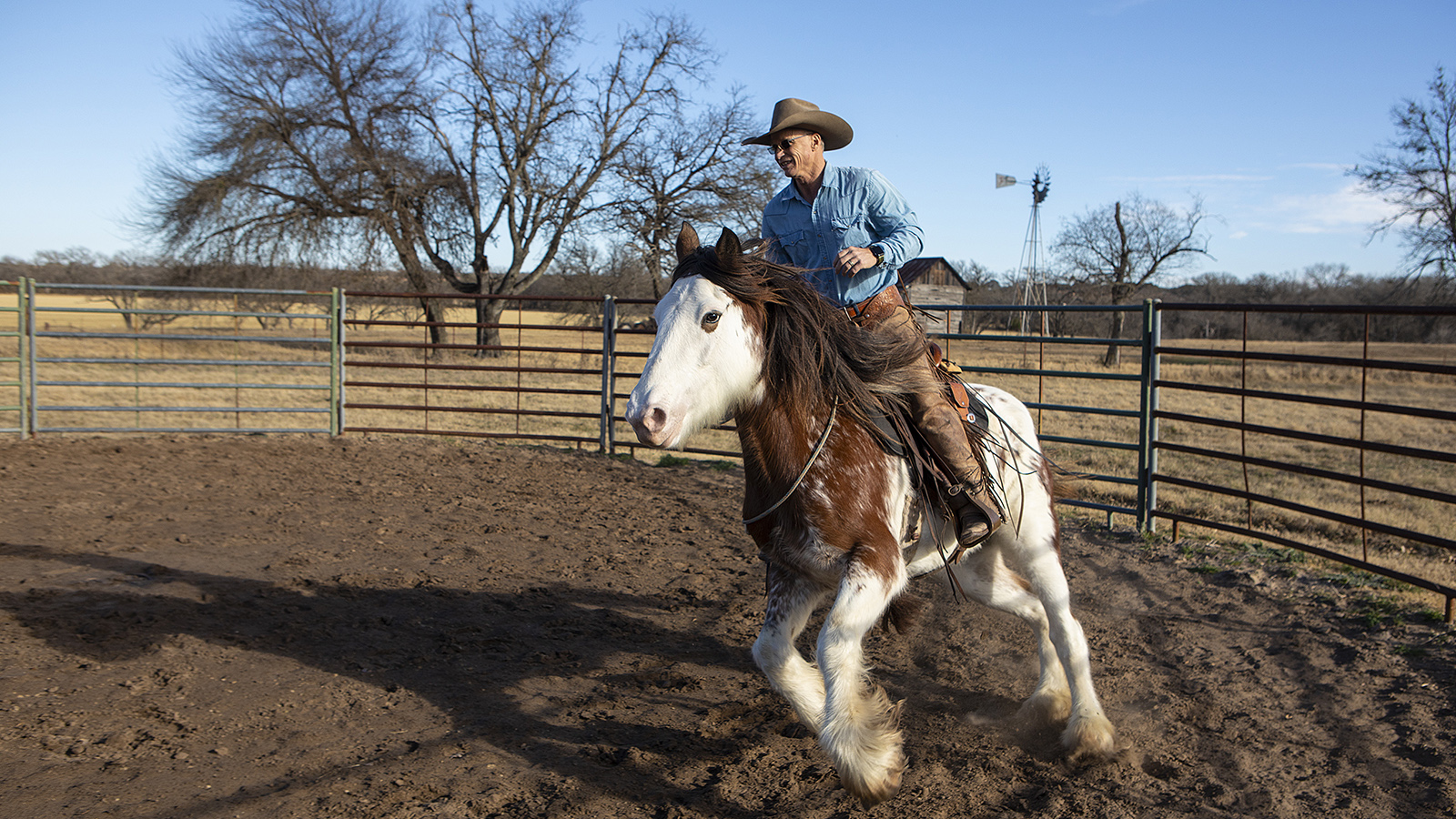 On her 11th session under saddle, a Clydesdale mare named Sioux roams through a large pasture, bridleless, at Ty Murray’s direction.

On a sunny, warm December day, Ty Murray rode his tall, flashy Clydesdale mare named Sioux into one of his pastures. Guiding her with his legs, seat and a simple halter, the former rodeo cowboy climbed up a bluff and navigated large rocks, cacti and brush.

After riding to the left and right while I took pictures, he paused and said to me and writer Jade Currid, “I guess I should practice what I preach.” He leaned forward in the saddle, unfastened Sioux’s halter, and then proceeded to guide her at a walk and trot through the 600-acre pasture on his ranch near Stephenville, Texas. It was the big mare’s 11th session under saddle.

During the past 20 or 30 years, Murray has pursued horsemanship with the same focus and drive that helped him win seven all-around championships with the Professional Rodeo Cowboys Association. As a horseman, he believes strongly in building a partnership through trust and communication. Forming a partnership is paramount to Murray.

“Being a horseman to me is being able to deal with your horse’s emotions in a way that works for him,” he told Currid in her article “Subtle and Steady,” which appears in the March 2022 issue of Western Horseman. “Because, that’s what you’re riding. You’re riding a big emotion with a giant motor. There are times where they’re really relaxed and happy, and there’s times that they’re herd-bound; there’s times that they’re barn sour. The tip is to learn how to be a better horseman with feel and know all of the fundamentals and foundation that these horses need to have an understanding.”

Murray believes that one of the biggest problems in the horse industry is riders who try to force the horse through harsh tactics, and that is especially evident in how riders pull and yank on the reins.

Murray prefers to use his feet, seat and balance to primarily communicate with his horses. Even when starting colts.

During that December day, he first worked Sioux in the round pen, shedding her halter and riding her without any rein aids. He got on the ground and she followed him at liberty and at his direction even jumped over a couple of barrels lying on the ground.

That was impressive enough for Sioux’s 11th ride. However, riding bridleless in a roundpen is one thing, but doing it in a wide-open pasture on a powerful but green horse is quite a feat.

“What bridleless does for me, is it makes me ride my horses with good straightness with my seat and my leg and with energy and life in my body,” Murray said. “So I’m giving them a lot more subtle information and taking the guesswork out of the equation. In my experience, whenever they start to develop that, they start to look at you as a leader—they start to want to follow you.”

Currid and I looked at each other in astonishment as Sioux stayed with Murray in the large pasture. As the sun went down, the pair roamed the large pasture for another 15 minutes. One time Sioux got a notion to walk forward when Murray wanted her to stand still, so Murray picked up the neck rope and leaned back until she came to a stop. Other than that moment, she guided willingly off Murray’s legs and seat.

“When I come down to the barn, Sioux walks up to the gate and is waiting on me,” Murray said. “What does that tell you? I’m not having to chase her around just to catch her. They start wanting to follow you when you’re providing them with good feel and good leadership. So what you’re trying to do is get that horse where he’s looking at you like you’re the lead stallion or the lead mare. And he doesn’t want to think about any of it. He wants to put his finger in your belt loop and follow you wherever you go. That’s how they are. That’s their nature.”

Jade Currid’s feature on Murray, “Subtle and Steady,” appears in the March 2022 issue of Western Horseman.