Sponsored Content Brought To You By Vettec Hoof Care

Often, farriers and veterinarians focus on trimming the toes more than the heels of a horse. When trimming, it’s important to tend to the entire foot, and not just one part, because it causes the foot to become uneven. Caudal Heel Syndrome, also known as Navicular Syndrome, commonly occurs because heels run too far forward due to lack of trimming.

When horses show signs of lameness, but the prognosis isn’t obvious, it is often diagnosed as Navicular Disease, a degenerative disease that affects the Navicular bone and surrounding tissue. More often than not, horses do not have the disease, but have Caudal Heel Syndrome, which can be treated with trimming and solar support products.

There are many different causes of Caudal Heel Syndrome, and symptoms can be addressed to deter the condition from occurring. Below are just a few examples of some potential causes and symptoms:

The horse pictured above has an overgrown heel. Therefore, the foot isn’t flat on the ground and the horse is bearing its weight unevenly. 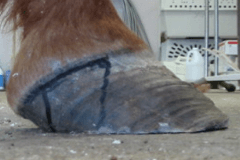 The horse pictured above has a trimmed hoof. The horse’s foot is also flat on the ground.

Instead of assuming a horse has something as serious as Navicular Disease, it’s important to decipher what caused the lameness in the first place. Ask how often are the horse’s hooves being trimmed? Is the horse’s weight being distributed evenly when standing? Is the heel overgrown? A horse needs to distribute its weight evenly so that it can land on its feet without putting stress on the toes and pinching the heels. A farrier should be able to measure and decide if the heel is too long and trim the feet as needed. If the condition is more advanced or progresses further, modern techniques including nerve blocking, MRIs and x-rays can be used to decipher where the exact location of the pain is in the foot.

The horse pictured above has an Equi-Pak pour-in pad to help support the hoof and engage the frog while it recovers from Caudal Heel Syndrome.

When a horse is diagnosed with a Caudal Heel Syndrome, the first step is to trim the feet properly and control the pain. Next, apply pour-in pads to support to the hooves with Vettec Equi-Pak CS to engage the frog and heel again, and help the horse distribute its weight evenly across the entire hoof surface. The frog refers to the dark-colored soft tissue on the bottom side of the foot that is triangular in shape, and stretches from a horse’s heel to midway toward the toe. The frog is often contracted and lacks circulation when a horse has Caudal Heel Syndrome, so it’s important to reengage it. Equi-Pak CS is a fast-setting, soft pad material that is infused with copper sulfate to prevent bacteria from setting in. Because the frog is often sensitive after diagnosis, the copper sulfate formula helps serve as a preventative measure to keep the soft tissue healthy and infection-free.

The feet are a major aspect of a horse’s overall health. If weight is not distributed evenly, it can cause injury and lameness, affecting a horse’s ability to do many day-to-day activities. With consistent and proper trimming regimens, a horse will be able to stand evenly and bear weight comfortably. It’s also important that a farrier is trimming the heels and toes equally to eliminate the chance of Caudal Heel Syndrome. Additionally, pour-in pads can provide additional support to maintain normal heel function.

More often than not, a horse does not have Navicular Disease and most likely has Caudal Heel Syndrome. Talk with your farrier or veterinarian about proper trimming and how pour-in pad materials can provide extra support and durable protection.

Click here for more information in the 2 Minutes with Tab Video Series.

From Draft Horses to Equine Athletes: Ritchie Has Provided 100 Years of Fresh Water to Horses Everywhere

What Is the Right Kind of Forage for Your Horse?