The Evolution of the Western Boot

The evolution of Western boots is an interesting story, from their original development as a safety footwear product in the 1800s to the current wide range of offerings including everything from work boots to high fashion.

The original Western boots were work boots, developed to service the men in the cattle industry. The lifestyle of the cowboy was nothing like images portrayed in the movies of the 20th century; it was dangerous, dirty work. These original boots were Wellington in style in order to facilitate quick removal should the user be caught with a foot through the stirrup. Soon, the underslung heal became a staple of Western footwear, helping to prevent the slipping problem. Shafts were tall and thick to protect the wearer from cacti and rattlesnakes. The men who wore these boots were out on the trail for weeks at a time and needed rugged, durable work boots to withstand long cattle drives.

From its beginning as a staple on the range, the Western boot has evolved to include a wide range of fashion items. As the movie industry developed in the 1900s, the cowboy and cowboy life were romanticized. Western apparel and footwear, as well as the “Western lifestyle,” became an American subculture, especially west of the Mississippi, reaching into Canada as well.

Much like the Western boots of the 1800s, Rocky Western Boots are designed specifically for the needs of today’s work day, equally suited for the ranch or the job site.  So how has work changed over the years, and what makes a good modern day Western work boot?

Let’s start with the outsole. The outsole is the bottom structure of the boot and what makes contact with the ground when walking. Typical Western boots have hard leather outsoles with an inch or more underslung heel to protect the foot from slipping out of a stirrup. Conversely, work boot outsoles are designed with a rubber outsole and typically a ½ inch heel, a style commonly known as “roper style” boots. This allows for maximum support and slip resistance throughout the work day. 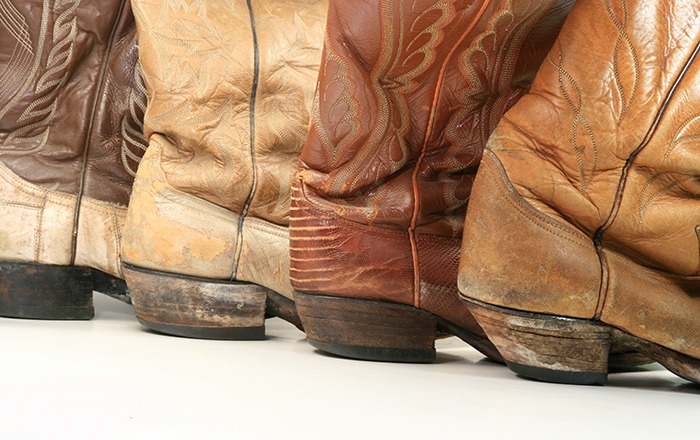 The insole is the often times removable part inside the boot that is between your foot and the outsole. It’s the material that makes contact with your foot when the shoe is being worn. Not only are the insoles important, but the entire construction of the inside of the boot, which is why The Rocky Original Ride 8-Layer Comfort System has been developed and perfected throughout recent years.

The first layer of this system is the orthotic form of the insole, with increased thickness in the heel strike zone that also cradles the foot for lateral stability. The extra cushy midsole is made with EVA for added shock absorption and is extremely lightweight. A double ribbed, tempered steel shank provides maximum under foot arch support while increasing overall durability and life of the boot. We are so confident in our Ride Technology that we offer a 60 day comfort guarantee! Check out all the Original Ride offerings here — Rocky Original Ride.

Lastly, an incredibly important component to work boots is the welt. The welt is a strip of leather or synthetic material that runs along the perimeter of the outsole. Its primary function is to attach the upper of the boot to the outsole. One of the highest standards in welt construction is referred to as a Goodyear Welt. The machinery used in this process was invented by Charles Goodyear Jr. in 1869 and involves cementing and stitching the outsole of the shoe to the welt. This dual process allows for maximum quality and durability, as well as the option for the shoe to be re-soled in the future. Never underestimate the need for well-constructed boots!

Check out all that Rocky Boots has to offer by visiting RockyBoots.com.

Dress for the Job

From Draft Horses to Equine Athletes: Ritchie Has Provided 100 Years of Fresh Water to Horses Everywhere

What Is the Right Kind of Forage for Your Horse?

GUARANTEED ANALYSIS – WHY IS IT IMPORTANT?