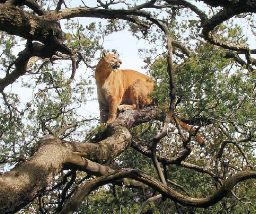 The effects of our 3 A.M. wake-up, and the hour long drive along an isolated gravel road paralleling the U.S.-Mexico border, faded quickly as we unloaded the mules from the trailer and saddled them in the chilly April morning air.

As I buckled on my chaps, I heard the pickup's tailgate drop. Seven Treeing Walkers-white hounds with black and tan markings-launched from the truck bed and dispersed across the brushy flat where we'd parked. In tracking mode, the dogs worked with their noses to the ground, their tails wagging energetically as they searched for signs of game.

Our guide, 71-year-old Warner Glenn, had chosen Estes Canyon as our entry point into Southeastern Arizona's Peloncillo Mountains, a rugged range with a thriving mountain lion population. As the rest of us finished saddling and mounted up, Warner, astride a white mule named Snowy River, called to the dogs, bringing them to him with a short series of low-pitched, drawn-out "whoops."

With Warner in the lead, we maneuvered the mules along a dry creekbed kept in shadow by the canyon walls. The hounds scattered like birdshot ahead of us, scouring the rocks and loose sand for a scent.

Warner's daughter and guiding partner, Kelly Glenn-Kimbro, rode behind him. She studied the ground on each side of her, looking for tracks as she rode. Like Warner, Kelly carried a .357 Magnum revolver in a belt holster positioned against her back, so that brush or tree limbs couldn't snag the butt of the gun.

On a lion hunt, a successful day ends with the dogs baying the cat, cornering it either in a tree or atop a bluff, where it's dispatched at close range. This excursion was about tracking, not hunting, but given that we were dealing with livestock, dogs and predators in remote, challenging country, it was best to be prepared for a worst-case scenario, hence the firepower.

I rode behind Kelly, scanning the steep angles of the canyon wall in the low morning light. A hawk watched us from atop a bluff far overhead, taking to the air as we passed beneath him. Otherwise, the canyon was still and quiet, save for the mules' footfalls and the rustling of brush as the dogs continued searching for a scent.

Behind me rode Arizona photographer Jay Dusard. As sunlight began to pour into the canyon from above, he periodically removed his camera from his saddlebags to photograph one element or another of the chasm's chaotic architecture, such as the randomly placed boulders that impeded our path, or the contrasting color patterns in the canyon's rock walls.

Riding drag was Ray Harris. For more than 25 years, Ray, a photo technician at an Ohio hospital, has spent two weeks each spring and two weeks each fall riding and hunting with Warner and Kelly.

We rode quietly, speaking infrequently, each of us unsure of what the next several hours would bring. As we ventured deeper into the canyon, though, I could already tell I was beginning a day I'd never forget.

For the complete story, pick up the October issue of Western Horseman.