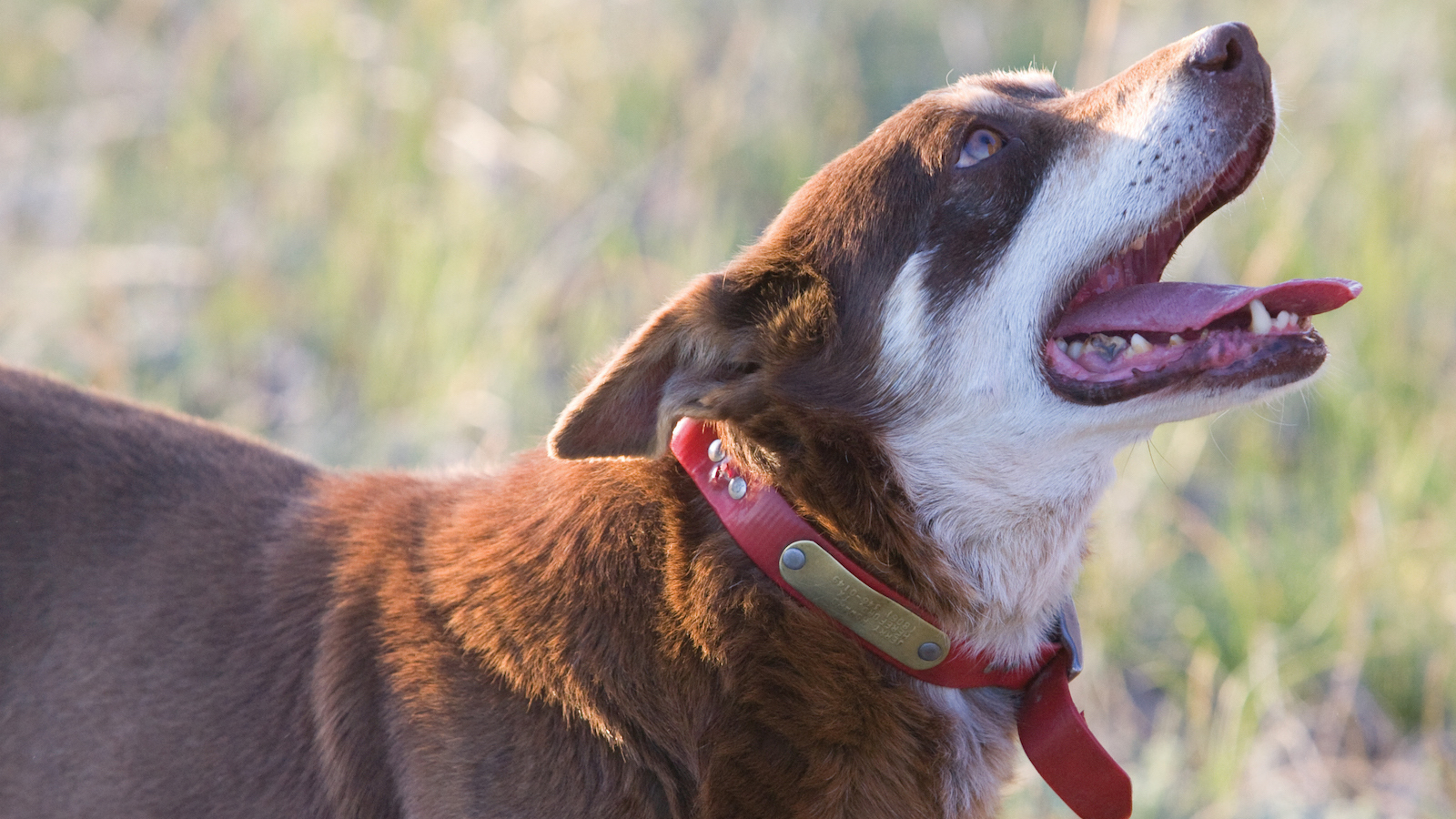 With grit, intelligence and a strong instinct to work, stock dogs are winning the affection and respect of cowboys and horsemen.

Like fish darting through shallow water, Sadie and Sue silently zigzag through the green pasture grass, staying low and moving in different directions to keep a set of yearling calves headed to the pens. The two black-and-white Border Collie females study every twitch and ear flick of the cattle, ready to redirect any yearling that tries to step out of line.

Horseman Matt Koch watches from the saddle and closes the gate once the cattle filter into his
large roundpen. The Elizabeth, Colorado, trainer then puts the first of several reined cow horse futurity prospects to work, sharpening its cutting skills. He separates one yearling from the herd, and the horse moves left and then right, stopping hard each time and staying between the herd and the heifer.

In cutting competition and in the training pen, turnback riders keep the separated heifer moving and pointed toward the horse. But Koch assigns the job to his capable, cow-smart dogs.

“I’ve got two guys working for me, and they stay busy saddling and warming up horses,” he says. “I don’t have to waste a guy by having him turn back for me. I just use those two dogs, and we roll through [the horses in training] a lot faster.”

Like many horsemen, cowboys and ranchers, Koch appreciates a well-trained cow dog. Border Collies have been his breed of choice for many years.

“They’ve got a lot of eye appeal and style [in how they work cattle],” he says. “Sue has a lot of presence to her, so those cattle will react to her without her having to bite them. She can just creep around and turn them each way, and she is big and strong enough that if she has to get after one, she will. It’s pretty cool. I’ve got two dogs that fit me really well. They’re just part of the program here. They’re turned loose all the time and then they come work.”

Whether it’s Border Collies, Australian Kelpies, Catahoulas, Curs, Australian Cattle Dogs, Australian Shepherds, or canines of mixed breeding, working stock dogs serve a vital role in handling cattle. How these intelligent dogs get the job done varies widely, depending on the type of cattle, climate, cowboys and their own genetic makeup.

Black, red, merle, brindle, short-haired or thick-coated, working cow dogs are growing in popularity. Today, a top stock dog can sell for $10,000 or more (two Border Collies sold for a record $30,000 each last year during the Red Bluff Stock Dog Sale in Red Bluff, California). In addition, an increasing number of cattlemen are open to letting dogs work their herds, according to Jerry Howard, a working cowboy and a breeder and trainer of Australian Kelpies.

“I’ve seen a major change in the last 10 years in the mindset of ranchers about dogs,” Howard says. “There have been so many guys with dogs they can’t control, so a lot of ranchers became leery of dogs. But now [ranchers] are coming around. You’re seeing more herding dogs being used on cattle outfits.”

Currently, Howard cares for stocker calves in the Texas Panhandle, and he uses his Kelpies to gather cattle out of mesquite and cedar brush. During his career as a cowboy, he has also worked in Nevada, New Mexico, Oklahoma and Wyoming, and he has found his canine crew able to adapt to different environments and a wide array of jobs. As herding dogs, Kelpies work similar to Border Collies, predisposed to bringing cattle to their handler.

“I’ve done every kind of cowboy job over the last 25 years, and I can do every one of them with the Kelpies,” Howard says. “I’ve caught wild cattle with them, worked gentle mama cows on the Padlock Ranch in Wyoming, and now take care of yearlings on wheat pasture. They’re just really versatile and can adapt to any of those situations. They were developed in a very harsh desert environment in Australia.”

Howard likes that his dogs work with grit and tenacity. Would he describe them as high-strung?

“You betcha,” he says. “That’s what they are. They have so much energy and drive in them.”

Like Howard, Travis Ericsson also prefers a dog with plenty of determination and stamina. The Arizona cowboy catches wild cattle in rocky, steep and dry country, and he relies on dogs with Catahoula and Black-Mouth Cur breeding. Catahoulas and Curs work more like hounds, relying on a keen sense of smell to find cattle, and then holding them in place and baying at them once they find them.

“There’s nothing worse than a dog that comes back to check on you instead of staying with the cattle he’s found,” Ericsson says. “With wild cattle, you definitely want your dogs to hold them up. Real wild cattle will try to haul out of there. So I need Catahoulas and Curs. Their short haircoat sure helps because it can get really hot here. They don’t bark on the trail; they start barking when they get the cattle bayed.”

Down in the marshes and thickets of the Deep South, baying dogs serve a crucial role as well, even on cow-calf operations such as the Gray Ranch in southern Louisiana.

“We’ve had all kinds, but the Cur dog is the best,” says Gray Ranch cowboy Donnie Moore. “Instead of chasing cattle, they just hold them and bay them up. We’ve had Border Collies, but they don’t bark enough. And heelers go in there and chase cattle. But Cur dogs will bay at them, bunch them up and hold them until we get there.”

Height: 16-24 inches
Weight: 40-80 pounds
Color: Yellow, reddish-brown, brindle
Traits: Rugged, good-natured, hard-working
History: This breed originated in the southeastern United States to herd cattle and guard property. The history is somewhat unknown, but they are believed to have descended from European herding and hunting breeds.

Once Moore and his fellow cowboys catch up to the dogs, they begin driving the cows and calves to the pens. They ride behind and on the flanks of the herd, while the dogs work in front.

“The dogs have got to have control of the cattle because of the thickets,” says Chipper Nance, who also works on the Gray Ranch and uses Cur dogs. “On the drive, they get up there in the front. And if the cattle get to traveling too much, the dogs are going to hold them up. If one breaks out of the herd, they’re going to bring him back. They might take a nip on it if they have to, but you don’t want too rough of a dog. If one of my dogs puts his mouth on a baby calf, shame on him. I don’t put up with that one bit.”

On the Buffalo Creek Ranch in central Wyoming, where cattle roam pastures with timber, sagebrush and wide open grasslands, Gwen Shepperson and her family rely on Australian Cattle Dogs, which are commonly referred to as red or blue heelers. The dogs are bred to drive cattle.

“In our situation, we don’t need a dog to bring us stock; we want them to drive stock,” she says. “We’re a family-run ranch, so our dogs and our kids are our hired hands. We cover a lot of rugged country, so we need a durable, mentally tough, resilient dog with a short haircoat. If they have to get nasty with an ornery bull, they can, but they’re smart enough not to be that way with a baby calf.”

“They turn back cattle for my husband, and they help us out in the pens, gathering and moving cattle,” she says. “Other breeds of dogs can be more intense than I like. Aussies are cool because of their versatility. I can take them to do demonstrations at obedience school. And then we go to the senior center and do a fun little line-dancing skit to entertain the senior citizens. And then they can hang around and be porch dogs all afternoon.”

Versatility is the reason many dog breeders have crossed different stock dog breeds together. One of the more popular hybrid breeds is the Hangin’ Tree Cowdog. Developed by Gary Ericsson in the 1980s, it comprises 3⁄8 Border Collie, 1⁄4 Australian Shepherd, 1⁄4 Kelpie, and 1⁄8 Cur.

Like Howard, Terrell believes that more cowboys and ranchers are open to working stock with dogs.

“I’m definitely seeing that cow dogs are becoming more popular, and a lot more people are using them across the country,” Terrell says. “I think a lot of ranchers and cow owners had bad experiences in the past, where people would show up with dogs to help them, and the dogs were chasing cattle through fences, tearing ears off, and there was no control. But now they’re seeing what a good cow dog can do, how it can read cattle, calm them down if they’re already ‘dog broke,’ and cause less stress.”

For those considering getting a dog to work stock, Chisholm advises having a thorough understanding of each breed and deciding what type of dog fits their situation. “It’s good to look at the different breeds and educate yourself,” she says. “Know what you’re getting into when you buy a dog. You’ve got to know what each one was designed to do, and honor that.

This article was originally published in the April 2019 issue of Western Horseman.

Tips for a Merry Christmas