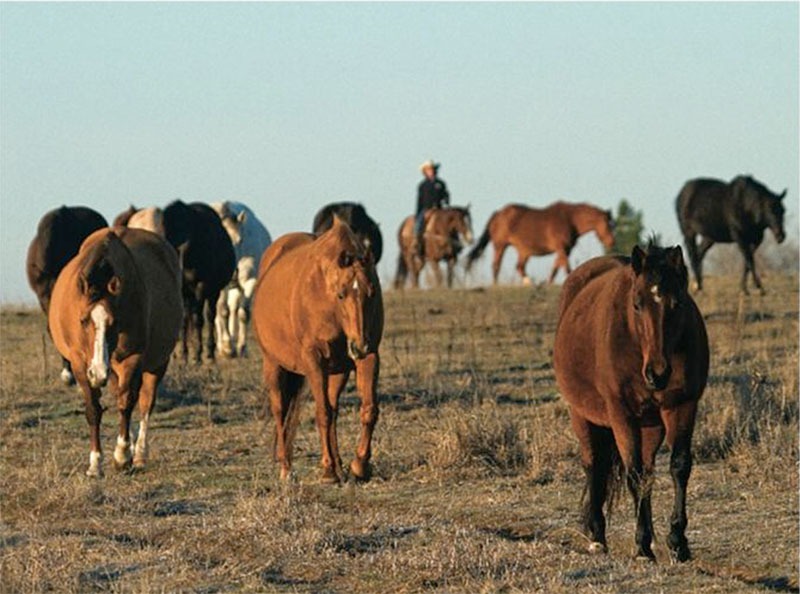 Terry Forst describes the advantages of gathering broodmares from the saddle  during breeding and foaling season.

Terry Forst of the Stuart Ranch in Oklahoma believes that outside air, open space and green grass comprise the healthiest environment for horses. She keeps her broodmares in an open 640-acre pasture, even during the spring when foals are arriving and mares need to be bred.

Stuart Ranch mares are bred via artificial insemination, so on Mondays, Wednesdays and Fridays, Forst brings the band of 30 mares into the breeding barn. Those in heat are bred, and the others are sorted off in pens near the barn.

Rather than using a four-wheeler or truck, Forst prefers to saddle up at 6:30 a.m. and gather the mares horseback.

“These mares have always been gathered horseback,” she says. “So it’s the easiest, most efficient way to do it. Once they see me, they know where to go. It doesn’t take a lot of effort. Some will walk and some will trot. I have some older mares that will walk all the way there. When the babies are on the ground, they’ll run around and play. The group gets really strung out.”

Forst says there are many advantages to using a saddle horse for the job.

“I don’t have to walk,” she says with a laugh. “But also, I’m always look-ing around the pasture, seeing what might need to be done. You can see where they’ve been grazing. And I feel like, being horseback, you can get where you need to be.

“Also, a mare that has foaled that morning typically won’t be with the group. So being horseback, I can leave the group and trot over to make sure [the mare and newborn] are okay. Typically, I won’t bring in colts that are one or two days old. If they and their mama will stay, I let them. If they insist on coming along, I’ll wait and then cut them out before they get in the alleyway [leading to the barn].”

Forst is aware that gathering mares, particularly protective mothers, requires some precaution. She doesn’t ride too close and keeps an eye on mares that tend to be aggressive and like to kick. She also carries a rope that can be used to shoo away a cranky mare.

“You need to know your mares,” Forst says. “I have some mares that are very offended when you get close to them. I have one that will kick you, so I always know where she is. Most of the time, the horse you’re riding will also give you some warning, because they’re aware of what’s going on, too.”

For Forst, nothing compares to doing her job from the saddle.

“Everything here has always been done horseback,” she says. “You can cross ditches, and you can’t always do that with a truck or four-wheeler.