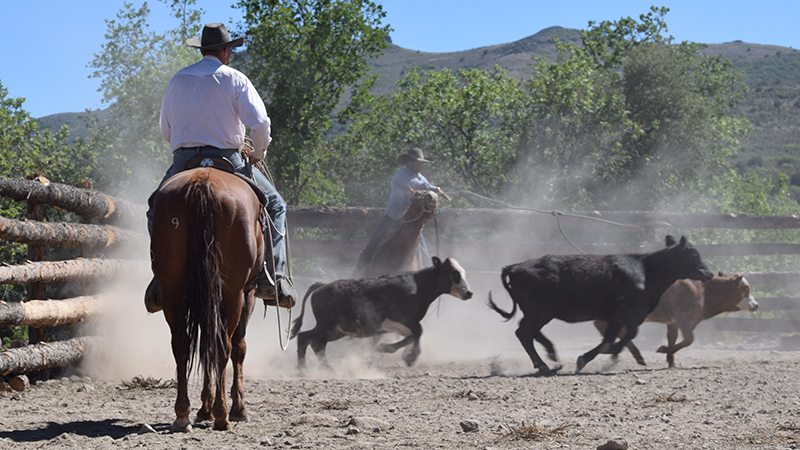 Four Reasons to NOT Marry a Cowboy

Although cowboys have many qualities that are easy to fall in love with, bride beware before tying the knot.

A cowboy on a horse cuts a dashing figure irresistible to many members of the fairer sex. Maybe it’s the hat, or the chaps, or the sight of him riding a bronco first thing in the morning that makes you think about how your first name would sound paired with his last name.

Whatever your motivation for wanting to marry a cowboy (if any), there are many misconceptions. Here are a few reasons to NOT marry one.

1. You think he looks really sexy in those dark blue, crisply pressed jeans.

Don’t be fooled. If you met him at a rodeo or bar, that is his only pair of go-to-town jeans. He probably wears them twice a year. The rest of the time he can be found in Levi’s that are shiny and dark from dirt, sweat and saddle oil. After several weeks, they develop a hard, slick surface similar to Naugahyde. Once they reach this stage, he declares them his favorite jeans and wears them every day. As the owner of the pants, he is naturally immune to their odor. The jeans will repel water, blood, laundry detergent and polite company.

But when he puts on his good Levi’s and takes you out to dinner, the two of you will make a handsome couple. You likely won’t go out to dinner very often, though, because you married a cowboy, which is a subspecies of the human race who is allergic to both town and money.

2. You want to ride and rope all day.

If you want to do cowboy stuff all day, you should hire onto the cowboy crew — not marry one of its members. Cowboys’ wives ride at every gather and rope at every branding only if they don’t have kids living at home. Living on a remote ranch has its perks, but access to childcare isn’t one of them. So, tag — Mom is it. All day. Every day.

If you marry a considerate cowboy (which you totally should), he will keep a nice horse around for you to ride and swap out childcare duties when he can. Despite gender equality, it isn’t a 50/50 deal, though, because if he’s on the payroll, he has an obligation to work full-time for the outfit.

3. You want to live in a big house with a wraparound porch and acres of hay meadows out the back door.

If this sounds like your dream home, you should marry a ranch owner. Which is a totally achievable; ranchers need lovin’, too. Cowboys usually live in something more humble than a big white house on a hill, though. More like a 1975 single-wide trailer with no screens on the windows or insulation in the walls. Sometimes they live in a 100-year-old wooden shack with no electricity or insulation. Basically, bring a coat.

Regardless of the quality or dwelling you inhabit, though, you are guaranteed to live in some breathtakingly beautiful locales that most people only get to briefly experience while on vacation.

Then you’ve chosen your spouse wisely, because this is exactly what comes with the title “Mrs. Cowboy.” You’ll live an unusual life, but it will be exciting and fulfilling.

Also, there will be a lot of dirt. So maybe throw a broom in along with that coat.

Gratitude Never Goes Out of Style

Have Saddle, Will Travel