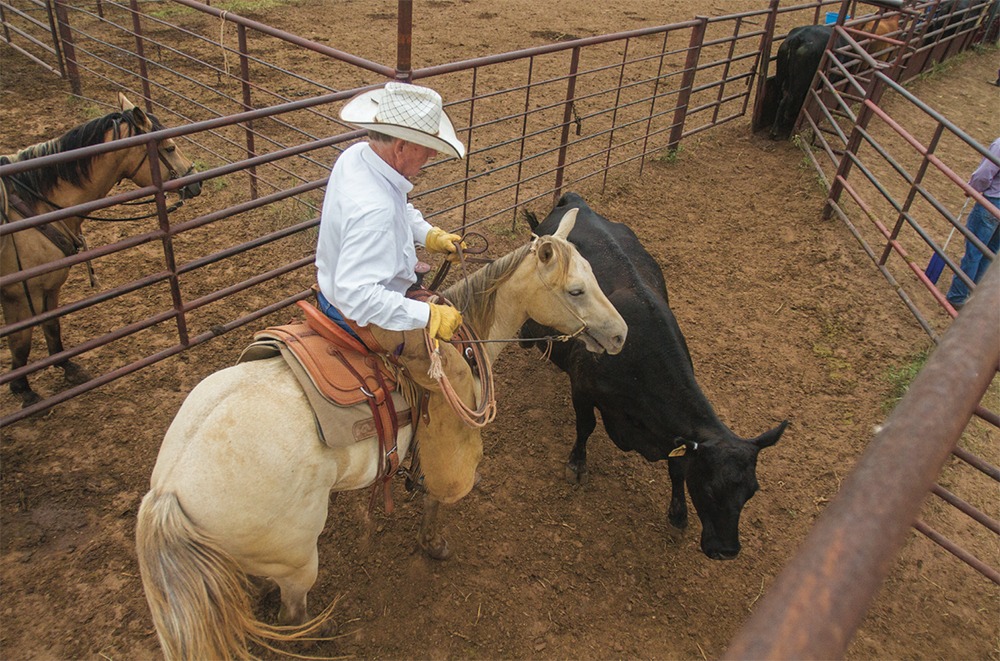 Smooth to the Chute

With gates slamming, cows bawling and cowboys on the ground hollering and waving their hands, the pens on Guitar Ranch near Spur, Texas, are swirling with activity.

Veterinarian Brandon Broyles stands near the squeeze chute with a long, clear plastic glove pulled up to his right armpit, ready to palpate another pregnant cow. One cowboy works the head gate while two others urge soggy black and red cows through the long, narrow crowding alley leading to the chute.

In the background, Monty McCloy and Bill Smith work horseback, quietly moving cows through a series of pens and gates and into the crowding alley.

“We were just keeping [the ground crew] busy, timing it so that the cows had a place to go,” Smith says. “It wasn’t a hot-shot kind of deal. We don’t want to mash them and try to get 20 into the hole at the same time.”

Smith and McCloy, both local, seasoned cowboys hired for the day, were selected for the job because of their smooth stockmanship skills. They move a few dozen cows from a large pen into a 10-foot-wide alley, and then drive six or seven at a time into a small crowding pen that connects to the crowding alley. Finally, one of the men rides into the crowding pen and  filters the cows into the alley.

Working in tight quarters, their objective is to step toward the group of cows and allow them to swirl behind their horses and toward an open gate.

“It doesn’t always happen,” Smith says. “There are some situations where cowboys have to force cows through the gate. But if you time it right, let things happen and don’t really hurry them, a lot of times those cows will work themselves.”

Along with good timing, proper positioning improves the flow of cattle. Sometimes one small step changes the horse’s angle on a cow and creates an opening for her to step past.

“You could stand there facing a cow and she won’t go by, and all you have to do is turn [your horse’s] butt and she’ll go by,” Smith says. “And if she’s not stirred up and crazy, all it takes to stop her is a step, or a change in your position. I see [a lot of] cowboys who want to overdo their moves when working cattle.”

Smith rides a 4-year-old gelding he bred, raised and trained. At times, cows refuse to enter the crowding alley, darting under his horse’s neck and to the backside of the crowding pen. Smith doesn’t frantically try to stop the cows, but simply circles his horse and tries driving them into the alley again. He is trying his best not to stir up the cattle, and also is offering a lesson to his young horse.

“Some cowboys would say, ‘Don’t let her get by,’ ” he says. “But instead, I was teaching him to go with her. That’s what I wanted to do with this horse at this age. It’s an excellent place for a young horse. And I knew I would get a chance to head one of them eventually.

“Another thing, I think it hurts a horse’s feelings a little if a cow gets by him. So maybe if she gets by him two or three times, he’ll tend to his job a little better.

“I can tell this helped his mind. This put him in a tough situation, and he learned he didn’t have to panic about it. He’s had a little deal about hopping up around cows when he’s fresh, but I even had an opportunity to back him up in the crowding pen.”

By maintaining a steady flow, the cows were worked as calmly as possible without wasting too much of the vet’s time. Plus, an uneventful day in the pens pays dividends for future works, especially when dealing with youngsters.

“Yesterday, we ran yearlings through the pens,” Smith says. “We wanted them to go down the chute nice and easy. If you make cows out of the heifers, or if they’re going to the feedlot, you hope that next time they’ll have an idea about how to do it. We were training those calves for their lifetime.”