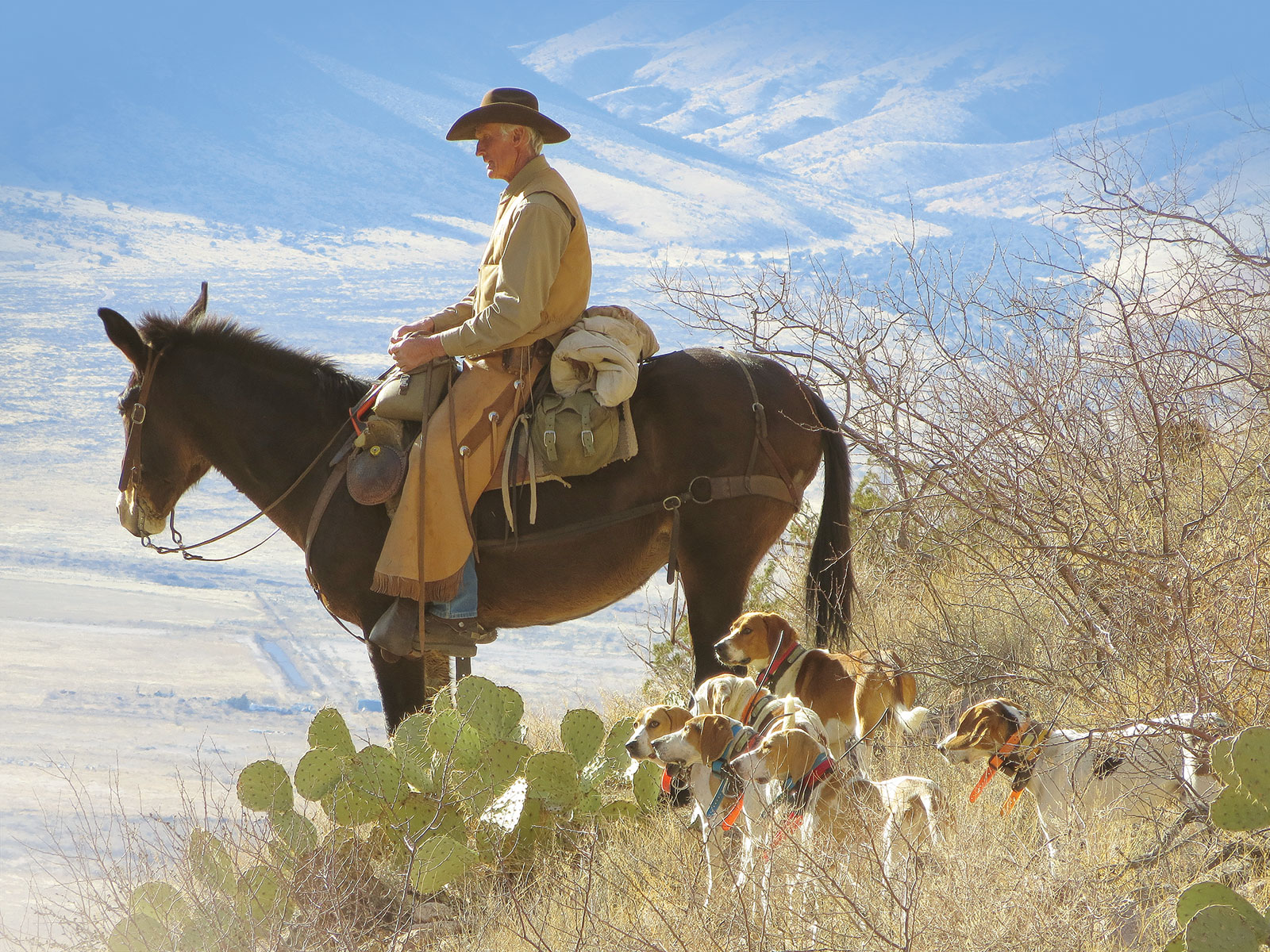 Warner Glenn sees his hunting hounds not as tools for his trade, but as family members that do him a good service.

When mountain lion predation threatened his family’s livelihood of cattle ranching and horse raising in the 1930s, Marvin Glenn sought a remedy. He began to raise hounds that could track and bay a lion to a halt. Today, his son, Warner Glenn carries on that tradition as a means to protect not only his ranch, but also other livestock producers.

With a successful track record, Warner and his daughter, Kelly Glenn-Kimbro, contract hunting nuisance animals in New Mexico, as well as their home state of Arizona. The Glenns keep a pack of 15 to 20 dogs, and hunt with about six at a time. The dogs answer to their names and each have a special place in Warner’s heart, especially one female named Catchit.

“We try to really take care of our dogs. This country, we have a lot of steep canyons and bluffs. The most dangerous thing isn’t a lion but a rolling boulder,” says Glenn. “If another dog dislodges a boulder, or a rock as big as a baseball, if it falls 30 feet, it will kill you or really hurt you. Your mule can roll rocks. More people are hurt by that than the wildlife you’re trailing. The country makes you be careful and watch every minute, not only for yourself, but also for your partner.”

The family has had their share of wrecks on the ranch, and a few dogs have been injured through the years, but none killed. However, on a hunt in the winter of 2020, they thought their luck ran out.

“This lion was backed up next to a 40-foot cliff drop and the dogs were barking in its face,” recalls Glenn. “The dogs usually have sense enough to stay back out of reach. I shot the lion, hit it good about 100 yards from me. When I did, it reached out and grabbed a dog by the head as it fell from the cliff. We knew the dog was going to be busted up terrible or dead. The lion fell upside down and had a hold of the dog above it and they fell out of sight. I was frantic.”

As Warner gathered the mules and his gun, he instructed Kelly to go find where the dog and lion landed. Both feared the worst.

“When Kelly go there, she got on the radio and said, ‘Dad, Catchit is OK!’ The lion hit upside down on its back in rough brush and rocks, and Catchit hit right on top of her,” says Glenn. “The lion cushioned her. She was growling at the other dogs when Kelly got there. I tell you what, we thanked God. We couldn’t believe it!”

Kelly recalled that later that day, on the way home, the dogs crossed another lion track. In spite of her ordeal, Catchit was right in the hunt, again.

“Catchit was right there. She was so OK! I felt all her legs. It was a miracle! The first place they hit was about 40 feet,” says Glenn-Kimbro. “They flipped off another 30 feet and it should’ve killed her.”

Though not a dog that craves attention, Catchiit’s work ethic long ago endeared her to the family. Today, she is a tried-and-true member of the pack.

“You get attached to the dogs and you watch something like that happen and you just get tore up. Then, she was ok and you can’t believe it! We’ll never forget that,” says Glenn.

Read more about Glenn in the October issue of Western Horseman.