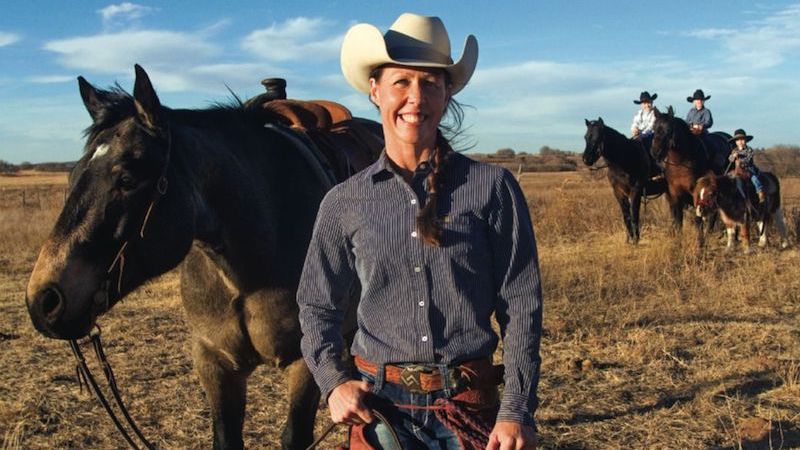 This Oklahoma horsewoman can hang tough with the best ranch bronc riders. But starting colts is her true calling.

Lori Campbell was raised on a ranch in southern Nebraska. During her senior year of high school her family moved to Oklahoma, where she rode racehorses, started colts and met her future husband, Jeremiah. The couple, married for 11 years, manages the West Camp for Davison and Sons Cattle Company near Arnett, while riding outside colts and finishing horses for their own use and for their three sons, Jake, 10, John, 6, and Josh, 3.

THIS IS IS THE ONLY JOB we’ve taken that I saw the house before the cattle. We’d been here two weeks and had to gather bulls with the crew. I was in charge of cooking for the guys and was petrified. Jeremiah said, “Don’t unpack any more boxes yet, just in case.” I would’ve rather went out and roped and tied a bull down than have to cook.

I WENT TO SCHOOL in a two-room schoolhouse. Kindergarten through sixth grade was in one room, and seventh through 12th was in the other. I was the kid who wore her pants tucked in her boots, and my job was being the mouse stomper.

GROWING UP, we always had horses and Dad believed in doing everything horseback. He had a couple of traders from whom he liked to get his horses. One was in Glen Elder, Kansas, and I should probably send that guy a thank-you note because he saved my life. From the time I was 5 or 6 years old, Dad would take me down there and I would pick out whatever horse I wanted. I think that horse trader would hide some of the horses I didn’t need to ride.

DAD WAS A SERIOUS HORSEMAN and cattleman, and we put so many miles on our horses. During calving season we rode through all the cows twice a day. He’d get my brothers and me out of school a week for branding and weaning. We always looked forward to being horseback, and, honestly, he and Mom needed our help.

IT’S A GOOD THING I didn’t know much about rodeo growing up, because if I had known you could make money traveling, riding and roping, I’d have been completely worthless.

HORSEMANSHIP WAS IMPORTANT to my dad, and he taught me to train the Ray Hunt way. When I started riding colts, he quit his job so we could go into business together. We took in 15 to 20 colts at a time for several years. He figured it out early on and always said if he was going to have a cowboy it was going to be me, more than my brothers.

JEREMIAH SAYS HE STARTED training horses because he knew it was the only way to get me. We’ve found that the cowboy life is even better, though, and it’s how we want to raise our sons.

WHEN MOST GUYS see that I can do a job without getting myself or them hurt, and they don’t have to take care of me, then they are pretty cool with me. I also take cookies, and that helps.

IT WAS HARD FOR US to adapt to having kids. But they ride out before dawn with us. It’s a long day for them, but it’s their normal.

AS A KID I WANTED to ride broncs, and I finally got on my first one at the Working Ranch Cowboy Association’s World Championship Ranch Bronc Riding in Amarillo, Texas.

AFTER THE FIRST BRONC bucked me off , I had to get on another one. For me, it’s about the horses, experiencing their raw power, the physical exertion and the adrenaline rush. There’s also always someone saying, “You can’t do it.” Yes, I can.

MOST OF THE PEOPLE we ride for leave their horses for six to 12 months, and we actually get to finish the horses. I think that’s something that has come with age for me. I used to love putting the first 30 days on a colt, but now I really enjoy finishing a horse and making it light.

This article was originally published in the March 2014 issue of Western Horseman.