Along with possessing a show prowess beyond her years, horse trainer Obbie Schlom-Hefner has already garnered important life lessons at an early age.

If a horse, event or career move appears to be more than she can handle, Obbie Schlom-Hefner will probably climb on board anyway.

At age 17 she left home to begin her career as a horse trainer, starting colts near her Southern California hometown of Silverado and living out of her pickup for months. Before then she had already built up a clientele and shown her arena skills by winning a reserve world title in the Extreme Cowboy Race Association’s youth division in 2009.

During her teenage years she also worked race colts, showed jumpers, competed in saddle bronc riding, trained a steer and a zebra, claimed multiple titles at the Bishop Mule Days Celebration, and won first and second at an Extreme Mustang Makeover event in Norco, California. In 2013, at age 18, she competed in the prestigious colt-starting championship Road to the Horse.

In 2014 Obbie relocated to the Texas Panhandle town of Canyon, without a customer base or a facility. But she has built a profitable training business and keeps busy riding everything from 2-year-old ranch colts to reined cow horse prospects and ex-bucking horses. Her husband, local cowboy Trey Hefner, manages a pre-conditioning yard nearby.

TREY WAS HIRED to come pick me up [in California] to get ready for Road to the Horse, because I just had this piece of crap pickup and a two-horse trailer. I was dating someone else at the time. When I first met him I could not stand him.  The first thing I said to him was, “Are you even old enough to drive?” He looks like a kid. He’s 25 and looks 16.

IT WAS A REALLY BAD breakup with that guy. Trey was there in the background, and one thing led to another. I had been here [in Canyon] about a year when we got married. He’s been my foundation.

I MOVED OUT when I was 17. I think my parents were waiting for me to come crawling back to them. But I was like, “Uh-uh. I’m out. I can do this.” Deep down, I didn’t even know if I could do this. But it all worked out.

I WAS ALWAYS into colt starting. Training horses is where my heart is. This is where I need to be. God opened a lot of doors and windows for me to do this. It’s not the greatest paying job doing this, but I’d rather be poor and happy than rich, educated and miserable.

THERE ARE NO HOLIDAYS, and no days off. You work all the time. And I’m not successful enough to have a bunch of assistants to man the fort for me so I can peace-out.

IT WAS MY GOAL [to be a veterinarian]. Then I realized there was 10 years of school and I said, “Nope, not happening.” I didn’t go to college, either.

I’VE BEEN BUCKED OFF hard enough to where I’ve broken ribs and smashed my face. And it never bothered me. But after several bad wrecks I got in before I came out here, every now and then I’m like, “Wow, you are scared of that horse.” I get scared all the time. But it’s mind over matter. You just control it.

FEAR INHIBITS YOU. That’s why if I’m going to get on a horse that I know has the potential for being bad, somebody’s here. Deep down my heart will race and I tell myself, “You can’t lose your cool.” When I let it get to me is when something bad happens. A horse senses it.

THERE IS A CERTAIN level of fear you have to have just to keep yourself respectful. So you don’t get cocky. When you get cocky, it blocks your instinct, and it’ll make you a step behind when you need to be a step ahead.

I CAN’T JUST do one thing. I get too bored. I have to do a little bit of everything. That’s why I have my steer, my zebra and all my dogs.

SOMETIMES TREY sends me down to gather sections where their cows are turned out just so I can ride my colts outside. Or if he needs help doctoring, I’ll go with him to do that. I love to go play cowboy. I always say “play cowboy” because I’m dang sure not a cowboy. That’s above my pay grade!

I CUSS THIS PLACE all the time, whether it be the wind, the crappy rain we get, the freezing cold or the really hot days. But deep down, you’d have to offer me a very large amount of money to leave. I love where I’m at.

This article was originally published in the September 2017 issue of Western Horseman. 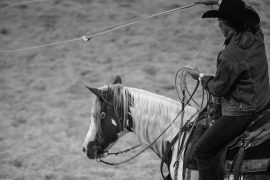 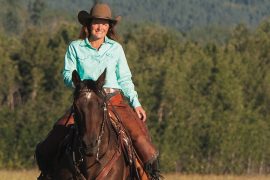 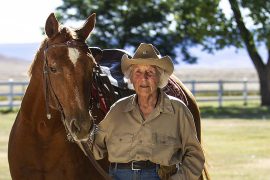 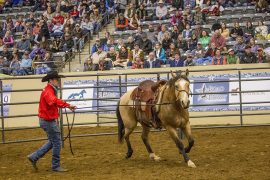