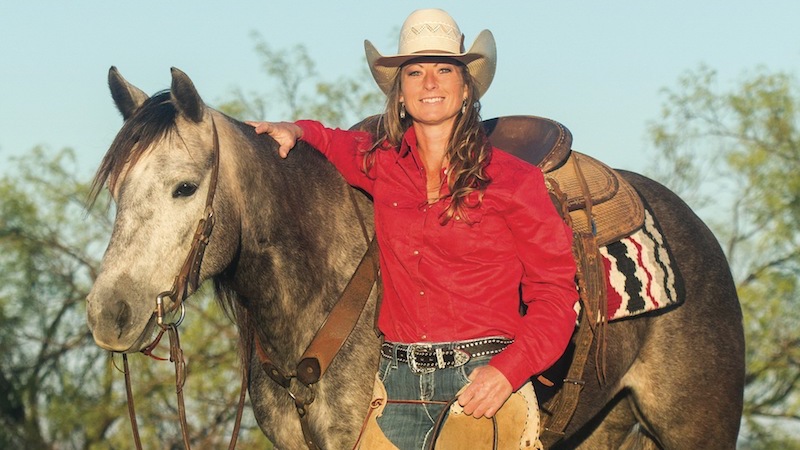 This Texas colt starter is discovering a new level of horsemanship in the show arena.

Tiffany McLaury has specialized in starting young horses under saddle most of her life. But recently, she ventured into the show arena and quickly found success. Showing Lil Miss Wicked Pep (pictured) for Billy Green of Green Land and Cattle in Albany, Texas, McLaury finished second in the junior working cow class at the Stock Horse of Texas World Championship in October of 2016.

McLaury grew up on several large cattle operations in West Texas while her father was making a living as a working cowboy. She says most of her horsemanship philosophies and knowledge come from her parents, Buster and Sheryl McLaury, who now conduct horsemanship clinics nationwide. She also was heavily influenced by Ray Hunt, a family friend and legendary horseman.

During the fall and winter, McLaury travels with her parents to start colts for several ranches in the Southwest. In the spring and summer, she stays mostly in her hometown of Paducah, Texas, and rides 2-year-olds for the public.

“WICKED” PROBABLY wasn’t the most gentle horse I’ve started. She is a sweet little mare. Super athletic. Good-minded. But I had to go really slow with her. If you put too much on her, she wasn’t going to take it. It took her a long time to finally let down and be okay with stuff. But once she did, it’s been pretty smooth sailing.

I HAVEN’T SHOWED much since I was real little. I don’t know why. I just got busy starting colts. But I like showing and can be a competitive person. Then Billy [Green] asked me if I wanted to start showing this little mare. I’ve had a lot of fun with it and learned a lot.

I THINK THE HARDEST thing with showing has been to step up that little mare. I’ve ridden so many young horses, and I don’t get to go very far with them [in training] most of the time. She knows her job, and I’ve just got to ask for it instead of trying to baby her along.

I ALWAYS WANTED to be an attorney, ever since I was a little girl. So I got my degree in political science, and after college I went to work for an attorney. And then I thought, “This is not what I want to do for the rest of my life.” I didn’t like being in the office, and I couldn’t get the horses out of my head. I went back to riding horses for a living. It’s definitely my passion and what I love doing.

I DON’T FEEL like I had to give up a lot [to quit an office job and train fulltime]. I feel extremely blessed to be able to work with horses every day. I don’t think I’ve had to make any sacrifices, except for when it’s cold outside.

GROWING UP on ranches, you learn responsibility and work ethic from a young age. Mom and Dad always made sure that my sister and I worked hard and had respect—not only for people, but for animals and the land.

SOMETHING I’VE LEARNED from both Dad and Mom: When they mess with a horse, they have its best
interests at heart. They are going to do whatever it takes to give the horse the best deal.

THE HORSES SEE ME walking up to the barn in the morning, and they just nicker at me. That’s a really nice feeling. At least they’re not thinking, “Oh gosh, here she comes.”

IF YOU GET ONE that’s really troubled about something, then that minute that they finally take a deep breath and let down, and are okay with what just happened, it’s rewarding because they’ve put their trust in you. I don’t think there’s a better feeling than that.

I LIKE THERE to be that respect, you know. I don’t want my horses walking all over me. I expect them to do their job. But yeah, I’d say I’m more huggy and kissy with my horses, and that’s a little different than
most men.

I DON’T CLAIM to know everything by any means. I try to learn something from everybody. If you’re there for the horse, as so many claim, then you’ll listen. It bugs me when people won’t listen or just think they know it all.

This article was originally published in the June 2017 issue of Western Horseman.