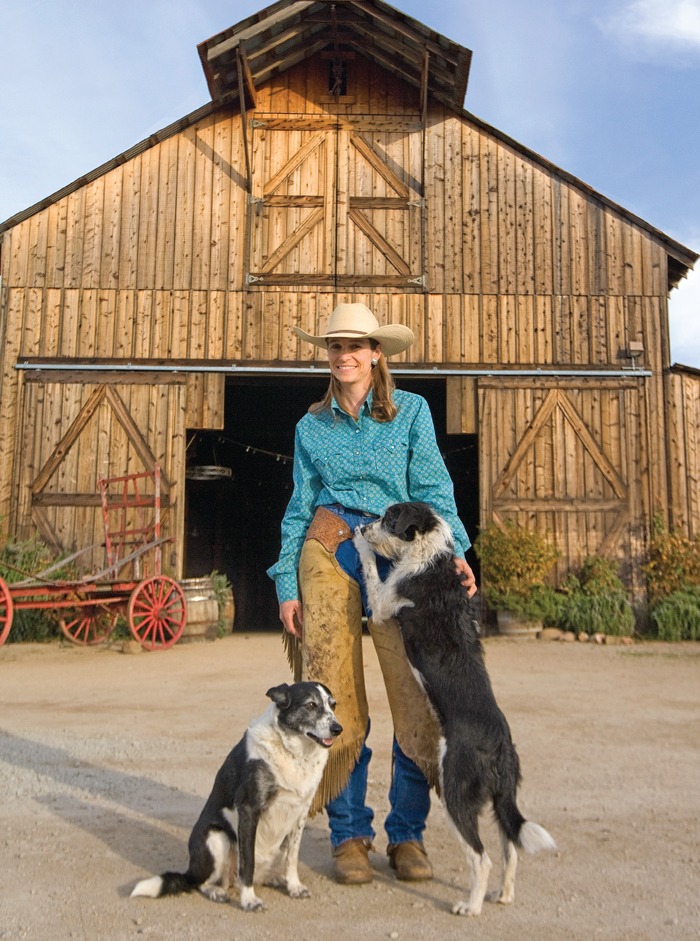 For this California cowgirl, Santa Margarita Ranch has been a place of happiness, pain and loss, and now, healing.

Raised in Lone Pine, California, a ranching community on the eastern side of the Sierra Nevada Mountains, 34-year-old Alie McKee always knew she wanted to make her living with horses and cattle. After graduating from California Polytechnic University in San Luis Obispo, McKee and her husband, Jeff, were married in the historic barn on the Santa Margarita Ranch in 2006, and began their life together working there. While visiting the ranch on Christmas Day in 2010, McKee’s mother and aunt were murdered by a trespasser. Refusing to let the tragedy define her, McKee has found courage, compassion, and an appreciation for the Margarita’s ranching heritage.

JEFF MANAGES the cow-calf herd on the Santa Margarita Ranch, and I help him. The ranch was grazing lands for the San Luis Obispo mission, and then it was a Mexican land grant. Cowboys have been branding cattle on this ranch for over 200 years. Every day we are honored to experience California history here, and we feel like we are stewards of not only the cattle and the land, but also California ranching traditions.

I DID NOT live on a ranch growing up, but I did grow up on a ranch. My lifelong friend Amy Olin and I had the run of her family’s Spainhower Anchor Ranch in Lone Pine. We rode miles in the desert together, moving cattle to summer range in the Sierra Mountains. Our parents turned us loose together on our trusty ranch ponies. The cows would be strung out for miles, and somewhere along that line would be two little cowgirls.

MY PARENTS passed their passion for horses to me. They bred and rode endurance horses in the 1970s, when the sport was just getting popular. They completed the Tevis Cup in old McClellan saddles— one rider, one horse, 100 miles in one day.

JEFF AND I MET four years before we got married, and he was working on the Margarita. I wasn’t an official employee here, but I would help him anyway. I never set out to work on a ranch, but I wanted to be part of the lifestyle.

I HAVE RIDDEN a lot of really special horses, or at least they were special to me. One that stands out in my mind is a filly I started at Cal Poly. She was one of the highest-selling 2-year-olds Cal Poly ever sold through the [National Reined Cow Horse Association] Snaffle Bit Futurity sale in Reno, Nevada. I fell in love with that horse and cried in the sale ring when she sold. She went on to be shown in reined cow horse competition, and she won more than $25,000 during her career.

YOU HAVE TO really love and get along with your spouse if you are going to work together on a ranch. It is satisfying to accomplish challenging jobs together, but you also spend a lot of “quality” time together.

I AM KNOWN for taking in animals, whether it’s a bird with a broken wing or a bottle calf. Jeff rolls his eyes at all the animals I try to save, but he really is a softie and brings some home to me.

YOU NEVER THINK tragedy will strike in your family—it’s so random and happens so fast. We weren’t doing anything wrong, and yet our whole lives changed so quickly. It doesn’t do any good to be angry, though.

MY MOM, Beverly Reilly, was born with a degenerative joint disease that caused her to spend a year in a wheelchair when she was 7 years old. Later in life, she had to have two hip replacements. She lived every day of her life in pain, but she never let that stop her from enjoying every minute. She didn’t have time to complain because she was too busy living.

MY MOM AND AUNT KATHY [Yeager] were two of the toughest, most amazing women I’ve known. They faced hard times head-on and with no complaints. The way they lived every day to the fullest and enjoyed every minute they were together shaped me into the woman I am today.

AFTER LOSING my mom and aunt, I try to find joy in ordinary things. I live in the moment, and try to not take anything for granted.

ONE CHARACTERISTIC that all great horsemen have is their ability to keep their cool in a tight spot or stressful situation. They don’t let their emotions take over when things get rough, and they approach the horse with just as much respect and understanding as when things are going good.

OUR DOGS ARE not only members of the family, but irreplaceable tools. We dedicate a lot of time to them. It is a thrill to see a pup we have raised gradually become a helpful member of the crew.

I HAVE WORKED really hard to hold my own with the guys on the ranch. I want to be a valuable part of the cowboy crew who fits in and gets the job done.

I DON’T MIND being the girl of the crew. I appreciate it when the guys open tight gates and work on the ground when doctoring a big cow. It’s not that I won’t or can’t do these things, because I darn sure can. But I appreciate the cowboys being gentlemen. They can open the tight gates and tail the big cows, and I’ll cook and do the dishes. It is a good trade-off.

This article was originally published in the August 2012 issue of Western Horseman.

Alie McKeeCaliforniaRanch WomenWomen of the West