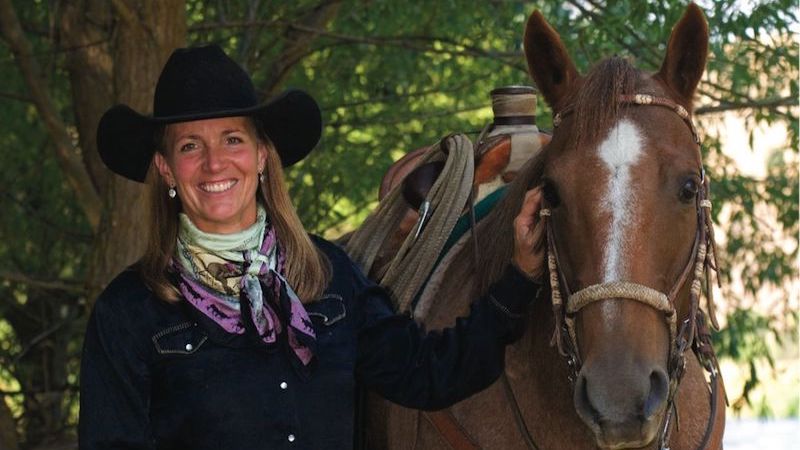 For fourth-generation rancher Liza Jane Nichols, the path back to her family’s Oregon cattle operation was lined with detours, uncertainty and plenty of tests.

Liza Jane Nichols married shortly after high school and abruptly found herself in an abusive relationship. She fled to Arizona and Texas, working on different horse operations. Several years later, she summoned the courage to return home, finalize the divorce from her first husband, and take the reins of her family’s ranch near Enterprise, Oregon.

Along the way, she raised two children from a second marriage, worked as a horseback steward with the Nature Conservancy, and established a local program and shelter for victims of domestic violence, which she directed for 14 years.

She and Craig Nichols, her husband of 19 years, raise Corriente cattle and train horses on their 6 Ranch. She also serves as president of the North American Corriente Association.

MY GREAT-GRANDFATHER homesteaded this place in 1884. I’m pretty lucky that the generations before me never sold out. They could have had an easier life at any point. They just hung onto it, and that means the world to me.

I GOT MARRIED to a man who dressed like a cowboy and could ride a horse. But it turned out he wasn’t a good guy. When he became violent, I feared for my life. I hid in Arizona and Texas for several years, working on horse ranches.

I HAD TO COME BACK to Oregon because this ranch is home. I couldn’t let him keep me from that. So I went to [Sul Ross State University] in West Texas, then transferred to Oregon State and graduated. My first husband had moved away [from Enterprise]. I finally divorced him, then I took over the ranch.

THIS HAS ALWAYS been in my blood. Here. To do this.

RIGHT OUT OF COLLEGE I got married to a local rancher, and we had two kids. I think our ambitions were different, so we split up after four years. So I took on this ranch with a 1-year-old and a 2-year-old.

PEOPLE IN THE COMMUNITY said I was crazy. Said, “You’re gonna run that ranch as a single mom?” I’d throw down their blanket, and I had a feed sack full of toys that I’d dump out in the pasture. Set out their bowl of Cheerios. Then I’d go to work and tell them to follow this fenceline to find me. I’d give them a bell to ring, leave a dog or two. They’d also spend a lot of time with me in the truck.

THEY’RE GREAT KIDS and love this place, too. My son, James, is a tank officer in the Marine Corps and is going to be deployed to Afghanistan in July. Adele, my daughter, helps here on the ranch and does it all—training colts, roping. She could run this place herself.

I STARTED A DOMESTIC violence program, built a shelter and was fortunate to help thousands of people. It was nothing I ever set out to do; I always liked animals better than people. But there needed to be a place for women and children to go, and there needed to be some changes in laws and awareness about that whole issue.

CRAIG IS GOOD at bringing the life up in a horse. I like to keep things calm and easy. So I’m good at building trust and taking the fear out of a horse. We work really well together that way.

FLY IS A HORSE I can do absolutely anything on. And she’s a smoking heel horse. I can do all the ranch work on her, she’s awesome in the branding pen, and she doesn’t want to screw up.

IT’S FUNNY THAT a lot of times when I’m in the city, people will say, “Cute outfit!” When I’m around people that aren’t exposed [to ranch life], it’s important to me that I share that as a rancher I take care of the land and produce food.

CORRIENTES ARE SPORT cattle. Unlike the beef business, where you take your cattle to the sale and somebody else decides how much [money] you get for them—I hated that—with Corrientes, we have options. We lease them to ropers, cutters—anyone that wants to play with cows. Then we put them on grass and raise grass-fed beef. And they’re all registered, so we have seedstock.

FIFTEEN YEARS AGO, in a lot of people’s eyes we [ranchers] were the ones “tearing up the land” and “being inhumane with our animals.” That was their story. And now, with them purchasing grass-fed beef directly from us, they love us. I go to Portland with our beef three or four times a year, and there’s a parking lot full of “green” people, jumping up and down. Last week, one of them told me I’m their hero.

IF SOMEBODY IDENTIFIES me as a cowgirl, it means that I care about the land, I know how to work hard, I take good care of animals, and I can cowboy up—I can rope, I can ride, I work my dogs. I’ve worked hard to learn those skills. So it’s a huge compliment to me if I’m recognized for that, versus “cute outfit!”

This article was originally published in the July 2012 issue of Western Horseman.