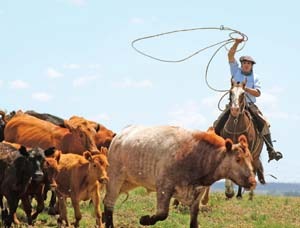 At an Argentine ranch roping, the author reconnects with the gaucho life he once lived and reflects on gaucho gear and techniques.

The horse felt good under me. As in, “Pawn my saddle and send me the money. I’m staying in Argentina.”

It had been two years since I had last ridden a Criollo stock horse, and ridden away from Estancia del Cielo. On that cattle ranch in the Andes Mountains, I learned to appreciate the nuances of Argentine horsemanship: a horse’s clippered mane and bobbed tail, the gait of its working walk, and the heavy rawhide reins that send subtle cues to a spade bit. It felt good to be back in gaucho country.

Lozano is one of the world’s elite rawhide braiders and spends long hours in his workshop. There comes a point, though, when he needs to escape.

“Vamos al campo,” he had said over a steak dinner at a neighborhood grill. The tables around us hushed. Those aren’t words you say lightly in Argentina.

The phrase translates simply as “let’s head for the country,” but it carries a deeper philosophical meaning, one rooted in Argentina’s frontier past. Gauchos would ride for years on end, from one estancia to the next, picking up work as they went.

Estancieros (ranchers) welcomed the wandering gauchos as part of a social code of conduct evident even today in the hospitality Argentines show any traveler. When the time came for a gaucho to move on, he announced he was “headed for the country,” saddled up and was gone within the hour.

Today, Argentines long-removed from the frontier have a visceral connection to the freedom of the open campo, or country. When an Argentine says, “Vamos al campo,” he means he’s leaving behind the stress of work-a-day life and reconnecting with the land. 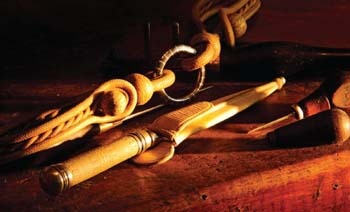 “I just finished a lazo (rawhide rope) I’ve been meaning to try out,” Lozano said, by way of an excuse. He made a few phone calls, and the next morning we were riding across his ranch on our way to a pialada, a gaucho-style ranch roping, following a path that led us past rolling grasslands, green valleys and scattered rows of poplar trees. Lozano and two of his workers led the way to a creek bottom where 50 steers grazed. As we rode, I was struck by the irony that Lozano’s lazo was made from the hide of one of their kin.

“Do you look at cattle and see beef, or future quirts, hobbles and bozals?” I asked. (The Argentine bozal is the equivalent to the North American bosal.)
“Both,” he said, and laughed.

Removed from the workbench, Lozano was relaxed and it showed in his choice of tack. He’s known for creating intricate braiding patterns, but today his horse sported no-frills working gear with nary a braid in sight. Still, I couldn’t help but notice the difference in quality between his no-frills gear and the loaner tack with which my horse was outfitted. Mine was gaucho-grade, handmade by Lozano’s workers with the economics of time and utility in mind, with little attention to adornment. I wondered what their boss, a master braider, thought of it.

“It gets the job done,” Lozano said. “There’s an element of art in that fact.” 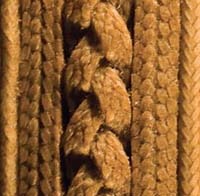 Anatomy of a Lazo
At first glance, the gaucho lazo looks like a reata. It’s made of braided rawhide, it’s used for the same job, and it’s about the same length—60 feet. But, up close a lazo has design features that make it a fundamentally different piece of equipment.

It is actually two sections of rope, braided end-to-end: the cuerpo (body) and a yapa (loop-end). Because the majority of rope breaks occur in the last six feet of a rope, the yapa is designed to be replaceable. When it breaks, a gaucho simply braids a new one, instead of a whole new rope. The yapa is also braided with two more plaits of rawhide than is the cuerpo; a six-plait cuerpo with an eight-plait yapa is a popular combination for cattle work. The extra weight helps “load” the loop in the air to improve a lazo’s throwing action.

Two other features that distinguish a lazo from a reata are the argolla (ring) and presilla (button-clasp). An argolla is made of metal and used in place of a honda. It adds weight to the end of the throwing spoke, acting like a cantilever to hold open the loop as it’s swung. Most Argentine lazo makers leave the metal argolla exposed. One exception is the rope makers of Santiago del Estero. They wrap the argolla in rawhide, giving it a look strikingly similar to that of a reata’s honda.

The presilla is the lazo’s most distinguishing feature. This button-and-clasp fastener is braided onto the tail-end of the rope and used to attach the lazo to a variety of objects, most notably the saddle’s cinch when a gaucho ropes from horseback. The presilla also gives a lazo a number of other uses: hobbling a horse, tying down a load, and even building a rope corral.

A Handful of Rawhide
Between a thick pair of reins, rebenque (quirt) and rawhide lazo, gauchos carry a substantial amount of leather in hand. Handling all the pieces without creating a rat’s nest takes practice and good in-the-saddle organization. Whereas a reata hangs from the saddle at the horse’s right shoulder, a lazo is stowed broadly looped and tied to the recado (saddle) at the horse’s right hip. The different approach owes partly to the way gauchos traditionally handle their rawhide gear.

“You don’t want to coil a lazo too tightly,” Lozano warns.

The more coils in a rope, the more kinks a rawhide’s memory will develop. Old-time gauchos hardly coiled their lazos at all. Instead, they draped them loosely around their horses’ rumps, where they dangled nearly to the animals’ hocks. That is one of the customs, though, that has faded with time from the gaucho landscape. In five years of working with gauchos, I’d seen only one horse rigged that way. Like most contemporary gauchos, Lozano tied his lazo to the saddle, dismounting and preparing the lazo for roping once the cattle were penned. 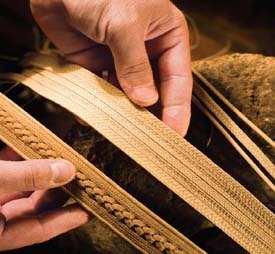 Lozano folded back the recado’s sheepskin seat to expose the saddle’s underworkings, from which his lazo hung. The recado saddle is a multi-layered affair. It utilizes two cinches: an encimera (under cinch) for fastening the saddle frame to a horse’s body, and a sobrecincha (top cinch) for strapping down the sheepskin seat. The encimera is the stronger of the two and includes a spare metal ring, called the pagual, where a lazo is attached by the presilla.

The rope’s 60-foot length keeps horse and rider at a safe distance from a roped animal, and braided rawhide is like elastic, with enough give that a horse won’t get jerked to the ground. If a roped cow exerts too much force, the lazo breaks free. And, every gaucho has an escape mechanism in the form of a huge knife he carries tucked into his belt. Gauchos are lightning-quick on the draw if they have to cut a rope to save horse and self from a dangerous situation.

Lozano’s recently completed lazo wasn’t broken in yet, lacking the refined feel of an aged rope. He took it down from the saddle, threw a loop around a corral post and pulled hard to stretch it out. The rope was impressively elastic. He leaned back with all his weight and the rope bungeed him forward. With the kinks stretched out, Lozano returned the rope to his saddle. He reattached the lazo’s presilla to the cinch’s pagual, making sure the connection would hold against the weight of a roped calf, then mounted up. It was time to enjoy a morning of ranch roping in the gaucho fashion.

The Gaucho Throw
The Argentine pialada is a big-loop rodeo enthusiast’s dream come true. Every throw has at least an eight-foot loop. The hefty lazo is like the Andean condor—big birds need big wings.

The throw requires a specific approach, beginning with how the loop is created. A gaucho doesn’t “build” a loop, he “arms” one. The end result is an armada, the weaponry reference apt given the lethal appearance of a lazo in motion.

In the saddle, a gaucho begins the armada by feeding out enough rope to make a loop that will hang to the ground. He takes hold of the loop at its union with the argolla, and pulls out an arm’s length of rope to create the throwing spoke. 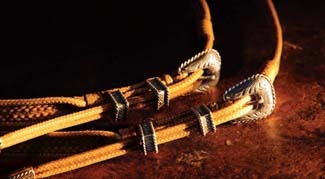 The next step is where the armada deviates from the North American approach. Three or four miniature loops—throwing coils—are held in hand with the loop and spoke. The coils are made tight, about eight inches in diameter, so they feel as if they want to come unwound in the hand. They form a “spring” whose potential energy is released when the lazo is thrown, helping propel it forward.

The object of a pialada is to rope one calf out of a rodear, either by cutting one out with your horse or throwing a loop into the herd from the outside, requiring great precision. Lozano’s rope wasn’t broken-in enough for that, so he opted for the cutting strategy. He rode into the herd, holding the rope at the ready, but not swinging it. A lazo requires only one or two revolutions to get up to throwing speed, so you see few whirling ropes at a pialada.

In the freeze frame of a photograph, the gaucho throw looks nearly identical to the North American houlihan. However, unlike the houlihan, it is thrown both clockwise and counter-clockwise in a variety of forward and reverse catches. The most common is the front-foot catch, also called the pialada.

Lozano cut a calf from the herd and put the rope into the air for an overhand front-foot shot. The lazo encircled the calf’s feet and Lozano pulled up into the air with his right hand to draw up the slack.

The calf on the line, now it was time to play out the rest of the lazo until all the reserve loops were pulled taut at the presilla. Lozano’s horse tracked the bucking calf, keeping it broadside, the lazo perpendicular to the horse’s flank. The bulky but agile gelding had a keen sense of tension and knew how much force to exert on the rope.

If this were a branding pialada, the gelding would either drag the calf to the fire or hold it steady for a team of calf wrestlers to take down the young animal. On sporting days like this one, we freed the ropes and moved on to pialar another calf.

“Some call it work,” Lozano said, rebuilding the lazo’s armada. “I call it research and development.”

Montana-based contributor Ryan T. Bell (ryantbell.com) is at work on a memoir about his experiences working with the gauchos of Argentina. Send comments on this story to [email protected].

By Cowboys for Cowboys — Founders of the WCRA