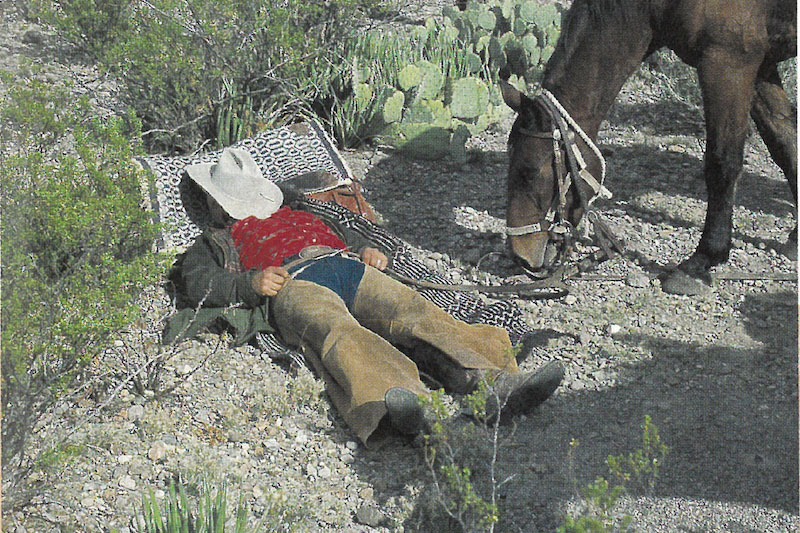 Trailing Longhorns with Larry Mahan on a historic Texas ranch.

Article and photography by RANDY WITTE, originally published in the June 1987 issue of Western Horseman.

The plane landed in El Paso under a low ceiling of clouds, the trailing edge of a genuine Texas Blue Norther. I was to meet Larry Mahan in­side the terminal, and then the two of us would hop a light plane to the Big Bend Ranch, which sprawls north and south­east of Presidio, Texas.

I found Larry slumped over a phone next to the luggage carousel. Old rodeo habits die hard. He’s on the phone as much as he was in the ’60s and early ’70s, when he was entering rodeos, rid­ing broncs and bulls, winning all­-around championships.

“There’s no plane,” he explained, covering the mouthpiece of the phone. “Im talking to the pilot now. He’s a kid from Germany who works for the ranch, and he says he’s weathered in.”

He uncovered the mouthpiece and re­sumed the conversation. “Yeah, well I’ll tell you one thing, Sky King. If this was World War II and you were in the Luftwaffe, Hitler would sure as heck have your fanny in the air, flying to­day.”

He hung up the phone and grinned.

“We’ll go to plan B,” he said. “I’ve always got an alternate plan.” We walked over to the closest car rental counter and Larry plunked down an American Express card. He waived the auto insurance, another old rodeo cus­tom, and a few minutes later we were loading saddles and bedrolls into the trunk. We drove over to the nearby Larry Mahan Boot Company, and walked into Manager Ed Hildenbrand ‘s office.

“You should come with us,” Larry told Ed. “That Big Bend country is beautiful—just what a guy needs to wipe away the cobwebs and get a fresh outlook.”

Ed was easily persuaded. He volun­teered to drive, and pulled onto Inter­state 10, anxious to get there. “It’ll be late when we arrive, but I’ll do the best I can,” Ed said. Moments later, an El Paso patrolman pulled us over for speeding, but Ed was a good talker and got away without a ticket. Forty miles from Van Horn, the road turned icy, and Ed slowed down. Larry slept in the back while we crept through the gloom.

“Look at that,” I told Ed, motioning to the back seat. “You can bet his ability to catnap helped him win all those buckles.”

Larry woke up at the sound of my voice. “When I was a kid, just starting out in rodeo,” he yawned, “I traveled some with Harry Tompkins. I remem­ber Harry and I leaving a rodeo late one night, headin’ for another one. I bailed in the back seat to sleep, and Harry started driving. We hadn’t gone but 10 or 15 miles, and all of a sudden the car runs clear off the road, down in the ditch, and then back on the road. I come boilin’ up from the seat and see Harry kind of shake his head.

“Harry said he’d be okay, so I settled back down and was just starting to relax again when the car goes off the road, runs across the median strip, and comes to a stop. I practically yanked Harry out of the driver’s seat. I told him he was too tired, and I’d do the driving that night. Next morning Harry wakes up, feelin’ good, and I’m still driving, about to die.”

Larry laughed at the memory. “Harry says to me, ‘Kid, about last night, well, that was the oldest trick in the book ….’ ”

We traveled south of Marfa on High­way 67 and pulled into an inconspicu­ous entrance, a rough dirt road. A dark­ened pickup with two men inside was waiting for us. The men, it turned out, were Joe Mims, vice president and gen­eral manager of the Diamond A Cattle Company, and Art Evans, supervisor of the Diamond A ranches. They were there to lead us to Cienaga Camp, and then take us to Ranchito Springs, where we would spend what was left of the night, and begin the Longhorn drive in the morning.

The man who heads up the Diamond A Cattle Company is Robert O. Ander­son, who at various times has owned more land than anyone else in the world. The company has worldwide cattle interests, including the world’s largest Brangus operation. The Dia­mond A purchased the Big Bend Ranch in 1962, and recently sold half interest to Houston businessman Walter Fylis­cher. The Anderson family also owns the Mahan Boot Company, and Larry owns an interest in the Longhorns.

The ranch consists of 360,000 acres spread out over 300 square miles of high desert, canyons and mountains. It’s a geological wonderland, and geol­ogists continue to study the variety of terrain in the area. One of those inter­ests in the northeast part of the ranch is the Solitario, a huge bowl eight miles across, surrounded by a limestone rim. There are only four passages down into the bowl.

The southern ranch border runs for 20 miles along the Rio Grande River between Presidio and Lajitas, which is just outside the Big Bend National Park. The headquarters, named Sauceda, which literally means “where willows grow,” is at 4,200 feet. The climate there is usually mild year­-round. Some 90 springs, including 23 major ones, dot the land. There are even a couple of waterfalls, both more than 150 feet high.

It’s rough country, covered with rocks and cactus, and also clumps of hearty, nutritious grass. “You’d be amazed at how much feed is out here, when we get enough rain,” said Joe Mims. Longhorn cattle thrive on it; so have Mexican Corrientes, in years past.

Human population has always been sparse on the Big Bend land, but it has been colorful. The earliest known in­habitants were the Anasazi Indians, “the ancient ones.” Old pictographs can still be seen on rock walls. Apache and Comanche Indians were at home in the area, and 23 Confederate soldiers went to their graves there, killed by Apaches on Post Mountain during the Civil War.

The ranch roads were originally put in by the U.S. Army, to get wagons loaded with supplies for “Black Jack” Pershing’s troops, who tangled with Pancho Villa’s raiders along the border in 1914. Old-West outlaws have also added to the history. Even Jesse James hid out for a spell at Cienaga Camp.

There’s a touch of mystery to the whole land. The Viejo stone corral, for example, is a large corral between Bo­tella (Bottle) Camp and Las Cuevas (The Caves), and it’s still used occa­sionally today to work livestock. There’s no mortar, just carefully placed flat rocks made into walls. No one knows for sure who built it—maybe the Spanish slaves of the 1700s, or even the conquistadores of the 1500s. There are stories of lost treasure, buried by the conquistadores, and of arms stashed by Pancho Villa and never re­covered.

The ranch was put together in the late 1930s. Cattle and sheep roamed the vast ranges until the early 1950s, when the Big Drought forced the sale of all livestock and even the ranch itself. At that time a New York City firm pur­chased it, and used it as a retreat for executives who needed to get away from it all. That was until the Anderson family acquired it.

We arrived at Ranchito Springs around 2 a.m. Most everyone was asleep, but John L. Guldemann, the ranch foreman, was up to greet us. The night was frigid, but we unrolled our beds in a three-man tepee, set up for us by Mike Capron. We crawled out of bed four hours later for hot coffee and breakfast. The cattle had been gathered the previous day and were penned; the remuda was also corraled. We met the rest of our crew and guests—ranch vaqueros, dudes, and part­-time cowboys. John L. said the cattle were gentle and had been trailed be­fore, and that we were along to push them 20 miles that day, doing little more than enjoying the ride.

I asked John L. for “a good, steady horse.” When you’ve got expensive camera gear lashed to the saddle and strung around your neck, you don’t want to go for a bronc ride when the horse hears the strange whine of a mo­tor-drive Nikon taking photos over his head. He brought out a little sorrel gelding named Amigo, and I thought, “This horse is too small for me; he won’t make it.”

Amigo was tired when we reached Botella at dusk, but he never faltered; he’s tough and knows how to travel over loose rock and take care of him­self. He knows about cholla cactus, too, and how to avoid it. I told John L. I liked the horse, and John L. grinned. “He’s a native,” he said. It usually takes a year or more for horses brought in from other locales to adjust, he said. Some outside horses never fully adjust to the terrain, he added.

John L. and his wife, Keri, and young son John Jess (“Bucko”), live in a house at headquarters. John grew up in El Paso and went to Sul Ross State Uni­versity at Alpine, graduating in indus­trial arts with a minor in animal sci­ence. He’s an amiable man who knows horses, cattle, and people, and how to make them comfortable; he can cook over an open fire, and fix something if it breaks.

The other guests included Bill and Bonnie McLeod, Lee Hornbeck, Linda Dossey, Dennis Marshall and Gary Dunshee. Gary is a saddlemaker at Big Bend Saddlery in Alpine, and he’s a good cowboy, too. We poked along to­gether riding drag for awhile, throwing heel loops at a cooperative little white heifer. Larry was off to the side, working with a green colt, and Ed tagged along with the rest of us.

“Big Jim” Stephenson, a Mercedes dealer from Dallas, flew in and joined us the second night. Jim is also a gun collector who likes to pack a variety of arms with him on any outing, but it was Joe and Art who pulled out their guns and shot holes in the night sky, just to liven up the party. No stampede—the cattle were inside another corral. Peace was restored when they ran out of ammo, and the rest of us hit the bed­rolls.

The Big Bend has big plans for the future. The entire ranch is gradually being turned into a wild game preserve and hunting club. The registered Long­horn operation will continue, but the ranch has its own professional wildlife biologist in Tony Dickinson, and Tony is helping to increase the wildlife. Eventually, people will be able to buy into the ranch, along with seven other western wildlife properties adding up to more than three million acres.

The package is being put together by Bill McLeod’s Backcountry Clubs of America, in Dallas. Members will have access to hunting, fishing, and other outdoor activities at each location.

Bill later wrote a long poem about our little cattle drive; Mike Capron did some pen-and-ink illustrations to go be­tween verses, and they sent copies to everyone who rode. The last verse went like this:

Here’s one thing for certain and I tell you no lie,
If you’re searchin‘ for yesteryear’s best,
Come out to the Big Bend on the old Rio Grande,
Where the West is still really the West!