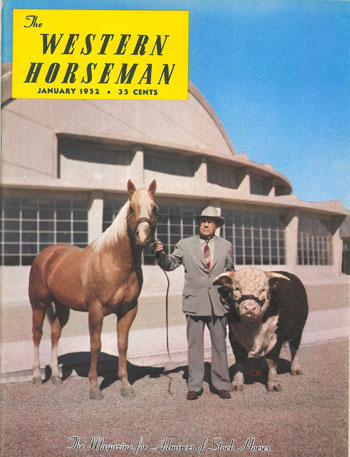 It’s a long stretch from the humble tent origination of the National Western Stock show in 1906 to the massive new concrete and steel monument to Western livestock, the new Denver Coliseum that will be ceremoniously inaugurated at the 1952 National Western when the gates fly open on January 11.

More than mere pages of recorded history span the turbulent period between the first Denver stock show and the 1952 running of the West’s most useful livestock event. Moldy records and dusty files are fascinating to students of yesteryear. But more important are the physical accomplishments and improvements- the evolution that is on the ground today in animal flesh and blood as the result of man’s constructive cultivation of the National Western in mile-high Denver.

No other stock show in America is so truly an all stockman’s livestock exposition–for the rancher or the farmer, rich or poor, for the big and the small, for the producer and the feeder, for the breeder and purebred fancier, for the horseman, cattleman, sheepman, hogman and city dude alike. Here, amid the acres of banner-emblazoned pens in the busy yards and the flag-flying grounds crowded with livestock and humanity on the hill, is an annual reunion of livestock people from the four corners of the nation.

Here is the friendly shoulder-rubbing place of the mountains and the plains, where the West hospitably meets the East under the common denominator of competitive livestock display and sale.

Actually, it all started back in 1899 when the National Stockgrowers association met at the then fledgling Denver stockyards, with the National Exhibition of Range Cattle as a sidelight. Although this show consisted entirely of feeder cattle (about 35 loads), many stockmen – and Denver businessmen, too–asked, “Why don’t you do it again?”

In 1905, three aggressive leaders of the growing Colorado livestock industry snubbed their enthusiasm for a Denver show to the band wagon… and started it rolling. Favorable reception for their idea among stockmen and citymen was found almost immediately by these three daddies of the show: The late Elias M. Ammons, then president of the Colorado Cattlegrowers association, who soon became governor of Colorado; the late Fred P. Johnson, then publisher of The Record Stockman; the late George Ballentine, vice president and general manager of the Denver Union Stockyard Co.

They passed the hat. They held a meeting at the Denver Chamber of Commerce and the first Denver stock show was foaled and registered as the Denver Fat Stock and Feeder Show in January, 1906. It was a crude affair, when you compare it with the modern Denver show. Breeding livestock were exhibited in a tent pegged down in what is now a section of cattle pens near the site of the present Livestock Exchange building. Feeder cattle, then as now, although not as numerous, were shown in the stockyard pens.