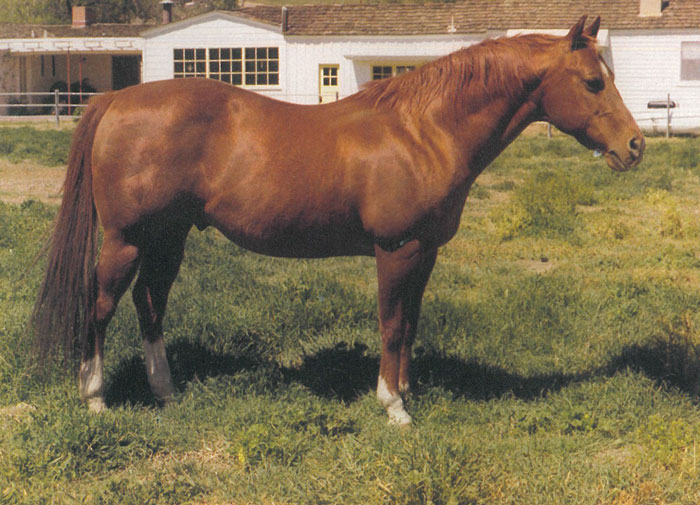 The Story Behind Doc Bar

One of the most prolific sires of the cutting horse industry.

This picture of Doc Bar was taken in March 1977 when he was 21 years old. Photo by David Brown of Eden Prairie, Minnesota.
By Bob Denhardt, written July 1986

Anyone with even a remote interest in the Quarter Horse world will recognize the name Doc Bar, for never has there been such a prolific sire of cutting horses. His influence is also felt in the world of cow horses and reining horses, but it is in cutting where he reigned supreme–and still does through his many sons that have become great sires.

Now 30 years old, Doc Bar still lives on the Double J Ranch of his owners, Dr. and Mrs. Stephen Jensen. The ranch is in California, near the town of Paicines, about 45 miles south of Hollister. The ranch is managed by Charlie Ward and his wife Stephenie, a daughter of the Jensens.

As the accompanying pedigree shows, Doc Bar was sired by Lightning Bar a son of Three Bars (TB), one of the’ great sires of racing Quarter Horses. Doc Bar was out of Dandy Doll, by Texas Dandy, and the aim of this article is to explain why I feel that so much of Doc Bar’s cow sense and agility came from the distaff side of his pedigree.

My first view of Doc Bar was all it took to sell me on him, as he was physically everything I like in a Quarter Horse. Anyone who has roped a calf would admire his height–14.3 hands. On such a horse you can step off to tie without wrecking a knee. His 1,000- pound weight was adequate to trip most any steer on which you have dropped a rope. Early in his life, he showed that he had enough speed to catch a calf or steer without using up the whole arena. He was deep through the heart, clean in the throatlatch, had little fox ears, and a beautiful head that he probably inherited from his dam’s sire, Texas Dandy. Look at Texas Dandy’s picture accompanying this article and see what you think. Doc’s britches were impressive, well-muscled inside and out down to the hocks. His action was true and straight, and he had two of the best hind legs you ever saw on a horse.