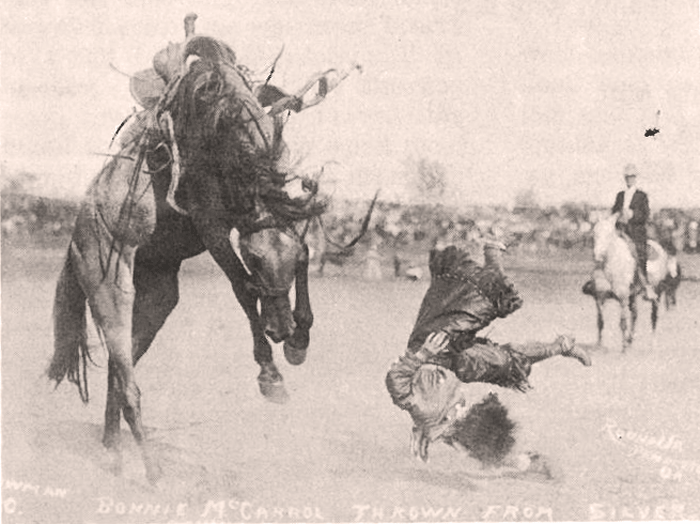 Picked Up In The Rodeo Arena: The Round-Up

On September 29, 1910, the Pendleton Round-Up had its very first “Cowboy Contest.”

The Round-Up, the spectacular Westward Ho! Parade, and the catchy “Let ‘Er Buck” slogan all came into being together in Pendleton, Ore., 61 years ago. The Happy Canyon night show and the American Indian Beauty Pageant were among attractions later added. The instigator of it all was an enterprising young lawyer, J. Roy Raley of the Pendleton law firm of Raley, Kilkenny, and Raley.

Bucking horse riding contests had been held in Pendleton and elsewhere in the vicinity, and an occasional rodeo was being put on in various sections of the country. It is likely that Raley attended some, or many of those early cowboy contests; possibly he also made it to Cheyenne for the Frontier Days tournament. Anyway, early in 1910, Raley got the idea of putting on the biggest western spectacle in the northwest in his hometown. He broached Mark Moorhouse with his idea of staging a big “cowboy carnival” in Pendleton. Moorhouse – an insurance and real estate agency operator who later became a well-known western scene photographer – was enthusiastic over the proposition.

Moorhouse, on the subject, later was to write: “The Association sent their selected exhibition manager [Moorhouse himself] and other members to places where cowboy sports were being held; in that way we were able to see just how cowboy sports [rodeos] were handled.”

The first Round-Up was held in Pendleton September 29-0ctober 1, 1910. The opening day crowd was far in excess of the fondest hopes of Raley and company. People swarmed in and quickly overflowed the available seating space. Hundreds of men, women, and children were left standing. In the emergency, carpenters and wagonloads of lumber were forthwith summoned to the scene. While that performance, and then the two following performances, went on, carpenters and would be carpenters were all over the place, erecting additional tiers of bleacher seats that were occupied by waiting spectators as soon as they were ready.

C. E. Pruitt (later a member of the Round-Up publicity bureau) recalled his impression of the first Round-Up in a piece appearing in the September 14, 1911, issue of the Eastern Oregonian as follows, in part: “I had intended going only one day, the first, for I had expected something in the nature of a country fair. That night, though, I was ‘riding bucking horses’ all night long, and the next morning, taking a lunch in my pocket, I was early at the grounds, secured a good seat, and sat there for six hours.