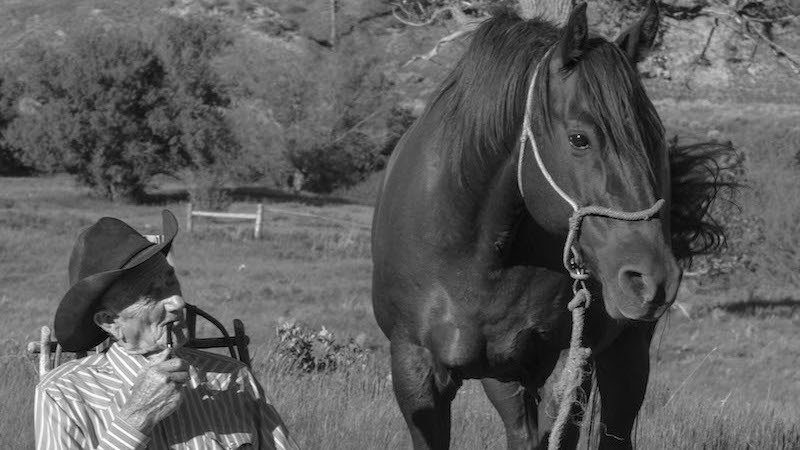 Riding thousands of miles while cowboying and starting colts, and feeling how a horse moves, prepared this Wyoming horseman for his calling later in life as an equine therapist.

When Bill Hackett shows up to a barrel race, team roping or he quickly becomes popular with competitors and their horses. For more than 30 years, Hackett has practiced as an equine adjuster, using acupressure techniques to improve the health and performance of horses. It’s a career that evolved from spending the majority of his 82 years of life horseback and riding colts on ranches in northern Wyoming and eastern Montana.

Hackett grew up on his family’s ranch in the Powder River Basin of Wyoming, 26 miles south of Gillette. He herded sheep horseback and stayed with the wagon starting at 8 years old. He quit school and left home at age 14 to cowboy on ranches.

“Sitting in that schoolhouse looking outside was really boring,” he recalls. “I didn’t like that at all and wanted to be out on a horse.”

The teenager went to work for the Wagensen Ranch south of Gillette, and lived in an old homestead where he was solely responsible for 300 cows, 100 head of 2-year-old heifers, nine colts and one saddle horse that was “supposed to be broke.

“He’d buck me off every time I’d get on him,” Hackett says. “The Wagensens were really nice people and had a lot of really good horses, though, and we did everything horseback.”

Several of the mares in the ranch’s remuda by a U.S. Army Remount stallion named Eclipse, who was a Thoroughbred-Morgan cross, and they were bred to one of his uncle’s Thoroughbred stallions. Hackett was familiar with both sides of the offspring’s pedigrees.

“My dad had four mares that were half Belgian and half Morgan, and every year he’d breed them to Eclipse, who stood at a neighbor’s place,” Hackett recalls. “When the Remount program ended, [rancher Edwin Earl “Cam” Camblin] bought the stallion and must have bred 200 horses to him every year. I rode a lot of those colts and they’d buck you , but man they were good horses. My dad always said if you could catch an Eclipse horse out of the pasture and get on and gallop him 25 miles he’d buck you , and you could get back on and gallop back the same 25 miles and he’d buck you off again. They had a lot of and could go for miles. I rode a million horses in this country, and those horses by Eclipse were the best.”

While working for the Wagensen Ranch, Hackett met Billie McClure, an aide at the local hospital. The couple married in when Hackett was 19 years old. Hackett shod hauled livestock and did other odd jobs, and the couple worked on several ranches in the Powder River Basin, including the Greenough Ranch, TY Ranch the Gibbs Ranch. They also spent a year in Miles City, Montana, where Hackett hauled livestock for a big and broke colts on the side. During his time on ranches he trailed millions of cattle, bison sheep, and if Billie was not riding beside him she was cooking for the crew out of a sheep wagon. She became known for her sourdough cooking. Their on Wyoming’s cowboy legacy earned them spots in the Wyoming Cowboy Hall of Fame last year.

“If there was a hall of fame for , I should be in it,” he jokes. “When we were at the Gibbs Ranch, Billie and I more than 20,000 sheep all over for 10 years. Billie pulled a sheep wagon with our kids [Dusty and Jacque] in it, and she rode thousands of miles and cooked out of the wagon.

“I really enjoyed trailing sheep, because they’re easier to work than cattle. Some of the best horses I ever made were in camp. They had to work a lot harder [than in cow camp]. Horses have to learn to really stay back from the sheep or they’ll just stop and lie down, and you really have to rate sheep when roping them. We roped sheep all the time—sometimes out of necessity and sometimes for fun.”

Hackett says he and Billie lived pretty well on a cowboy’s wage of $300 per month. They saved until they could buy their own ranch on Bitter Creek, near Recluse, Wyoming, in 1971. There they raised their two children, along with horses, cattle sheep.

Horses were and continue to be a big part of the family’s life on the ranch. They raised some of their own horses, breeding horses with foundation cow horse and racing bloodlines, both for ranch work and for Dusty and Jacque to ride in youth rodeos.

“We had a mare we called Sally, a big sorrel mare that [traced to] Texas Dandy,” Hackett says. “She kept us riding good horses for a long time. I think I was 50 years old before I ever rode a gentle horse. Then somebody would take those horses from me.”

For about 10 years, the Hacketts bought 3- and 4-year-old racehorses the used them for ranch work and then sold them as polo horses to a buyer in Sheridan, Wyoming, where polo is a prominent sport.

Though he didn’t compete much in rodeo, Hackett says he didn’t need to because he rode his fair share of rank colts and broke nearly every bone in his body, including his neck twice. One of the horses he remembers most is a Hancock-bred gelding named Buck.

“When I  first got him, Jacque could ride him bareback with a halter, and Dusty roped off him, but when I got on him he might buck five or six times a day,” he says. “The last time I rode him was to ship steers. It was a cold morning and we had just got out of the corral and he took off , turned over on his side and we both hit the ground. I told Billie after two years of riding that horse I wasn’t going to do it anymore, and I sold him. Down were at a rodeo in Broadus, Montana, and they were talking about a bronc nobody could ride. When the chute gate opened it was ’ Buck.”

In the mid-1980s, Hackett sought acupressure treatment from a local therapist named Buster Harlow to help with a neck injury. Feeling how the treatments helped him, he wondered if they could help a horse he had with neck problems.

“We worked on that horse for a half of a day,” he recalls. “We didn’t know what we did, but it worked. That’s how the whole equine therapy started for me.”

Hackett sought training and became known for this ability to help horses. His services became so sought-after that he started a program called For the Sake of the Horse and began building a team of adjusters who trained under him. Today he has trained adjusters, including his daughter, in 10 states and two Canadian provinces. He has worked on more than 1,000 horses per year and continues to do
as many as he can today.

“I remember when I told my dad I wanted to learn equine adjustment,” says Tiffany Schwenke, one of Hackett’s protégés, of North Four Mile Creek Ranch in Gillette. “He said I should talk to because there’s nobody who does it that has ridden a million miles like Bill and knows how a saddle horse should move.”

People are often skeptical of Hackett’s alternative therapy until they see the results, and he admits as a young cowboy he never dreamed he’d be adjusting horses.

“I could’ve saved myself a lot of broken bones from getting bucked off when I was younger if I had known what I know now about horses,” he says.

After suffering a heart attack in 2004 and a stroke in 2014, Hackett moves a little slower and is a little weaker than he used to be, but he credits his wife, children and his team of adjusters for keeping him going. And, he adds, adjusting horses is just as much therapy for him as it is for the horses.

This article was originally published in the November 2016 issue of Western Horseman.

Learn From Horsemen Past

Perfect the Rate and Turn Positions