The president of the WaterShed Animal Fund seeks real-world solutions that the entire industry can get behind to help unwanted horses.

It’s about finding common ground, says Christy Counts, when it comes to making positive changes in equine welfare. As president of the WaterShed Animal Fund, she travels across the United States seeking that common ground in every corner of the horse industry.

In place for about three years, the Fund (a division of the Oklahoma-based Arnall Family Foundation) supports innovative programs that seek to improve animal welfare for dogs, cats and horses. In 2017, it launched The Right Horse Initiative to target programs that increase and improve adoption and end-of-life options for horses. To reduce the number of unwanted horses in the United States, the Initiative sees adoption as a crucial part of the solution, and one that the horse industry can unite behind.

The differences in the way people in the horse industry live with, use and manage their horses “are staggering,” Counts says, and that’s been a big impediment to finding solutions all parts of the industry can agree on.

“People in the horse industry generally love horses and they do care about the topic of horses at risk,” she says. “A lot of them have never been presented with workable solutions or how they can be involved with solutions.”

Counts and The Right Horse Initiative are all about changing that. “So far we’ve already funded over $5 million in equine programs,” she says.

Originally from Oklahoma and with a background in for-profit and nonprofit business management, Counts has spent 25 years working in animal welfare. She “jumped into horses about seven years ago” and has several at her home in Bedford, New York.

“Much of the accomplishments we’ve had in dog and cat welfare were based on collaboration between municipal shelters and rescue groups and the broader public,” Counts says. “Bringing that same principle to the horse world— having the industry collaborate with the welfare groups and the public—it’s the same formula. We just have to be on the same page.”

The subject of equine welfare covers so many issues, from Bureau of Land Management Mustangs to neglected unwanted horses. Why choose to focus on increasing horse adoption?

For horses, we wanted to do something new and different and that would have long-term impact. We spent at least a year in research with stakeholders and focus groups, touring and having conversations with rescue and industry groups. That all culminated in The Right Horse Initiative. What we discovered through that diligence was that there is a lot of division in the industry, and a lot of things people don’t agree on.  That keeps them from moving forward together.

With  The Right Horse Initiative, we wanted to focus on the one thing everyone does agree on, which is finding better, humane transitions for horses in this country, even if it’s end-of-life transitions.

What do you mean by “transitions?”

We feel a need to define the difference between a rescue horse and a transition horse. A lot of people feel that horses in a rescue group are all untrained, not sound and not useful, and won’t meet their needs. It’s simply not true.

Many horses ending up in an adoption center weren’t in need of rescue at all. There was nothing wrong with them; they just needed a new home. They are no different from a horse sold from one barn to another barn; they just happened to end up in an adoption group. We want to call those horses “in transition,” because that’s what they are. They’re still useful.

Rescue horses are those that needed some sort of legal intervention. They were seized because they were starved or neglected and have a long rehab in front of them. That’s a very different thing.

There are a lot of fantastic horses just waiting for a new home. If we work to build infrastructure we can create better transitions for those horses.

Read the entire interview with Counts in the September 2018 issue of Western Horseman.

Purchase your copy of the September issue here. 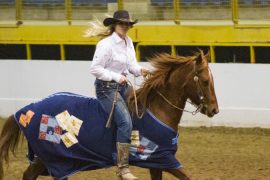