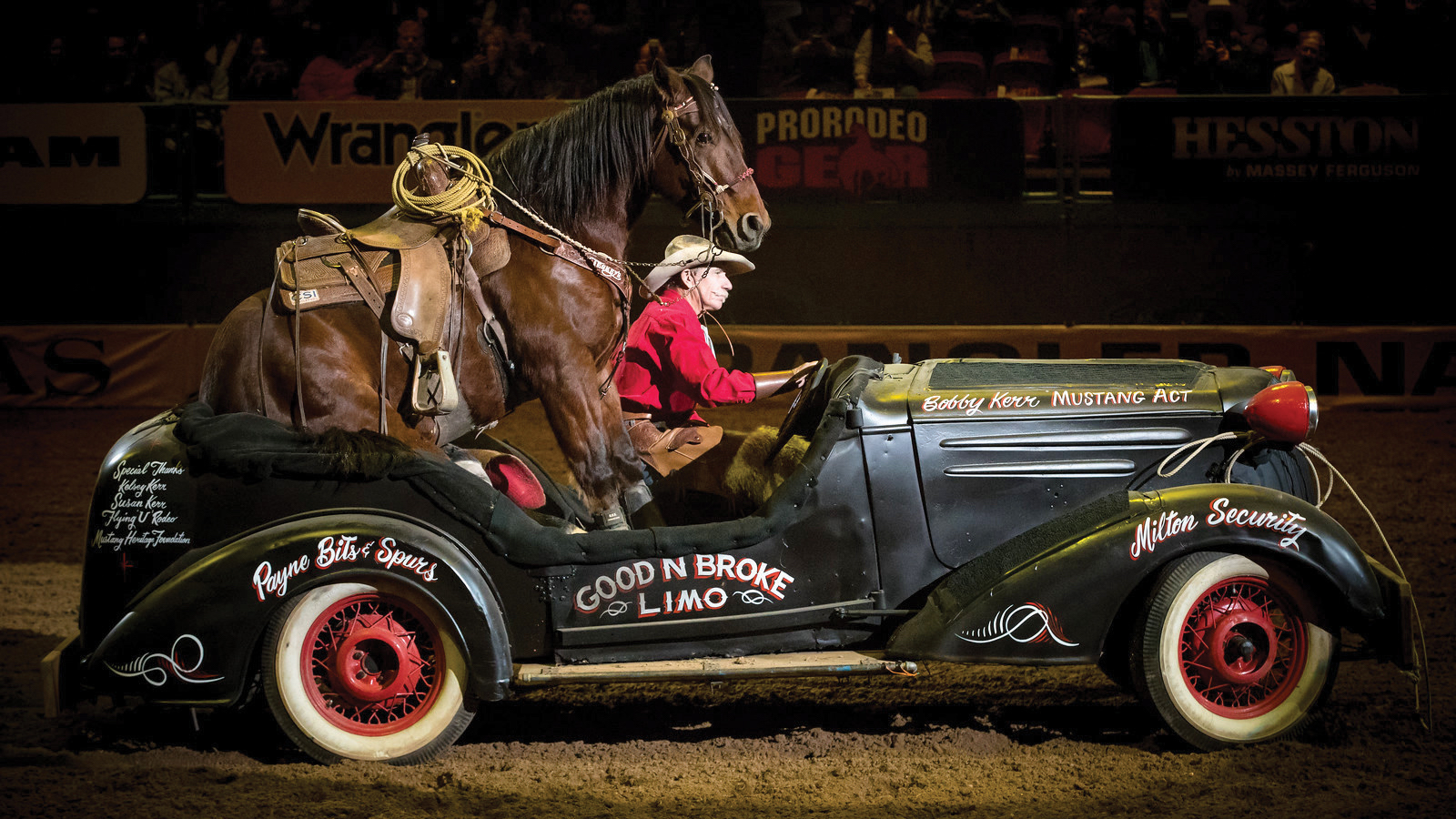 Bobby Kerr had less than two weeks to get his new Mustang yearling road-trip ready. That meant able to reliably load into a trailer and, more importantly, handle the frenzy of noises and commotion that stock show and rodeo season brings.

Kerr travels to perform his Mustang act at more than 40 events throughout the year, from rodeos and stock shows to equine expositions. The Professional Rodeo Cowboys Association named him the Dress Act of the Year in 2017. He must be confident that his horses can handle themselves in what can be spooky environments—including reworks, large crowds, blaring music, and other hyped-up horses in close quarters.

The trainer, who has competed in several Mustang challenges and had an early career working with reining, cutting and rope horses, adopted the little roan gelding from the Bureau of Land Management’s Triple B Herd Management Area in Nevada last July. A harsh winter left the tips of the horse’s ears frostbitten, so Kerr named him Frosty and took him home to Hico, Texas.

Getting Frosty to load willingly was the easy part, Kerr says.

“When I first got him, I loaded him in every trailer at the Flying U [Ranch],” says Kerr, who stays at the California ranch owned by rodeo producer Cotton Rosser during the West Coast leg of his travel season. “When we went to gather cattle, I’d jump [my older Mustang] Newt and Frosty in the trailer and then just tie him up, let him go for a ride, and then come back. I would feed him in the trailer.”

The challenge came when he needed to start the desensitization process for his future performer. Kerr says that while his methods aren’t “rocket science,” they do require handling a horse outside of its comfort zone. To help a young or inexperienced horse handle the stress, he enlists the help of a seasoned horse.

“A using horse gives the young horse security,” says Kerr. “I firmly believe in having a good using horse. And all you have to do is train one, and then you have him to use with all your newer horses.

“I used that [to my advantage] when I loaded Frosty in the trailer,” he says, adding that he would always load Newt, an experienced horse, and Frosty together in the beginning.

Newt helped Frosty build confidence by being his sidekick during Kerr’s training sessions, which included three desensitizing exercises. The trainer found working on these lessons at home made the young horse less reactive when it came time to face the music, pyrotechnics and action on the road.

When Kerr first brought Frosty home, he kept him in one roundpen, and Newt and several others in another nearby pen.

“I knew Frosty was going to be drawn to stand on the wall closest to the other horses,” says Kerr. “So I tied a light tarp on the fence, and it’s like a kite, whipping and blowing. He had to get used to that tarp to get closer to the other horses. Instead of him relating the scary tarp to me, he has to figure it out on his own.” He explains the tarp is a good way for horses to get used to banners hung along arena walls.

He also put Newt in the pen with Frosty with a second tarp on the ground underneath the one tied to the fence. In the center of the tarp were a few flakes of leafy green alfalfa. Kerr says feeding horses on a tarp, or by any other spookworthy obstacle, makes them associate the aversion with a reward, making it much less stressful. Frosty also saw that his pal Newt wasn’t scared of the tarp, which encouraged him to be brave.

This whole process typically takes a couple of days, and Kerr moves on to the next phase of desensitization.

Foot and hoof traffic at stock shows can make a horse anxious, especially in tight quarters behind the chutes or in barn aisles.

To get Frosty used to crowds, Kerr rode Newt and ponied the young horse in a roundpen. He says he rides with a flag on the end of a training stick and dallies once around the horn so it saves his arm from being pulled. He recommends using a short lead rope so there is less line to get tangled.

“Ponying gets him used to being beside another other horse,” says Kerr. “I want the experienced horse to be his compadre in a stressful situation. For example, if [a green horse] was tied to a fence, and a bunch of barrel racers came in the arena to practice, it might [set] back. But if the older horse is next to it tied up, calm and cool, the young one becomes secure.”

If the ponied horse starts to pull back, Kerr lets the dally slide until the horse stops pulling, and then he continues riding forward. If the horse gets too far forward, up toward the riding horse’s shoulder, Kerr uses the flag to tap the horse’s shoulder back. If it continues to go forward, he will stop and let the horse hit the end of the dally.

Hobble in the Center

One of the last exercises Kerr puts his horses through before going to town is teaching them to hobble. He ups the ante by riding in circles around the hobbled horse.

“I hobble-broke Frosty within the first couple of days of bringing him home,” he says. “Once he was comfortable with that, I put my hand on his forehead and told him to stay. Then I loped around him to get him used to a horse running right at him and running behind him. I’ll start with loping a circle or two, and then work up to more as he gets more comfortable and better at standing still. If he rolls, that’s fine, I just don’t want him walking off.”

He stresses that he does this exercise following another workout, so the horse associates the resting position in the center of the circle as a reward. The hobbles emphasize the release spot.

“I’m all about when and where you rest them,” says Kerr. “I will lope around the hobbled horse, and if he moves, I will keep putting him back. He’s not going to get very far in the hobbles. It’s teaching him to stay put, and later on when he’s turned loose and doesn’t have hobbles on, if he runs off, I will chase him around and make him work until he goes to the center. By then he should know where he needs to be and where that release spot is, because we worked on it with the hobbles.”

Though he is small in stature now—the young gelding measures just 13.1 hands— Frosty has made huge strides in his training progress.

“It’s amazing how fast they’ll come and the confidence they’ll get with preparation,” he says. “I used to ride cutters, and calf horses and reiners way back. Had I done then what I do now, my horses would have been a lot more broke. I spent all my time cutting or roping … I didn’t do all this stuff I do now.

“Frosty is as broke as he can be before throwing a saddle on him. Either way, he’s going to fit into my program and act.”

This article was originally published in the January 2019 issue of Western Horseman.

Stopping the Clock For Good Times