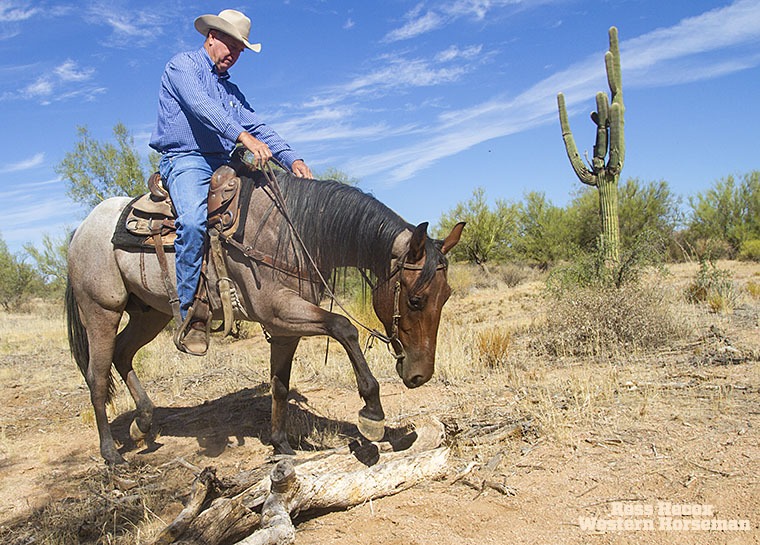 A horse is more willing to step over unfamiliar objects if its rider isn’t too forceful.A common issue with young horses when being started under saddle is fear of strange objects. Arizona horseman Mike Kevil has started many colts under saddle, and he says many riders take the wrong approach when introducing their horse to scary objects or troubling places. He writes:

“One thing to keep in mind when you’re riding a nervous horse is staying low-key about those scary things. I’ve watched riders try to school their horses when they shy away from something. They turn their horse toward the object and let him look at it. Some will try to force the horse up closer and make him look at it. But put yourself in the same situation. Let’s say you are watching me hold a snake, and you don’t want to come any closer because you’re afraid. Then I walk toward you, shove it in your face and say, ‘Don’t be silly. Just look at it.’ The more I insist, the more you’ll resist. I am going to have a very hard time forcing you to relax and accept the snake. On top of that, if every time I had something you were afraid of and I forced it on you, you would no longer trust me.

“By forcing all new things on a horse, you will condition him to be afraid of all new things instead of allowing him to be curious and want to investigate. That approach also causes him to focus on it more than necessary. Letting a horse look at something he’s afraid of is good. However, if you change his focus to something else in short order, he will soon ignore the thing that scared him. In other words, if you make it a big deal, it will become a big deal. Using a buddy horse also helps diffuse the focus on the scary object and encourages the horse to reconsider their initial desire to run away.”

For more helpful tips from Kevil, check out the May 2017 issue of Western Horseman. His article on working with young saddle horses, “The Buddy System,” appears on page 66.

Mike Major Teaches a Colt to Give to Pressure