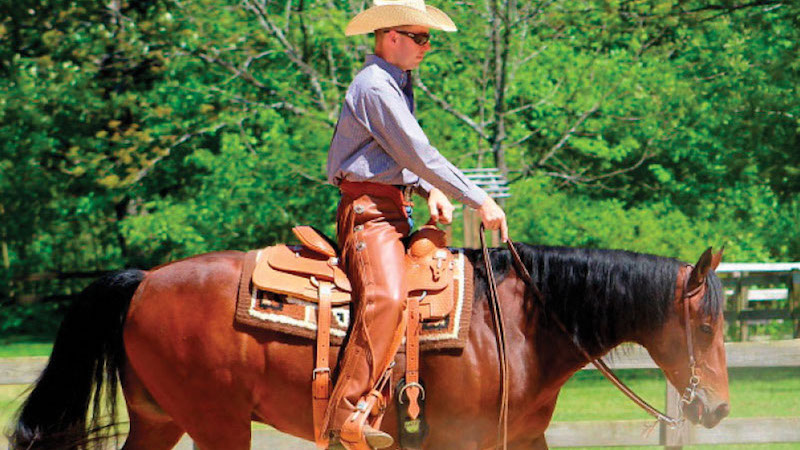 Anhidrosis: A Beer a Day Keeps the Doctor Away

When a reining horse stopped sweating, quick diagnosis and treatment helped him recover.

For having a name like Sailor, the horse didn’t get wet much. When the 5-year-old bay Quarter Horse was donated to St. Andrews University’s equestrian team, coach Carla Wennberg had suspicions as soon as she started getting the reiner legged up over the summer.

She says that two months into training at the Laurinburg, North Carolina, college, he lost all forward momentum when ridden and was acting cranky, so she brought it to the attention of the university’s veterinarian, Laura Kellam, DVM.

“I could tell that internally something was going on with him, but I couldn’t tell what,” Wennberg says. “He had a heavy mane, but he would only sweat a little behind the ears and between the legs.” Kellam, who visited the barn every day as part of her rounds, quickly recognized the problem.

“In Sailor, his respiration was increased, and he was not able to do the amount of work he normally was able to do,” she says.

“He was [a case of] complete anhidrosis. He stopped sweating.”

Anhidrosis is a condition in which the body is unable to sweat. Warning signs include intense labored breathing,  flared nostrils and increased body temperature, and little to no sweat. Untreated, it can lead to heat stroke and death.

“You can have a horse that is partially anhidrotic, meaning he will sweat a little bit, but the horse is not able to sweat to the capacity of regulating his temperature,” Kellam says, “or they can be complete, in which the sweating system has shut down.”

Sweating allows the body to maintain core body temperature, she says. If a horse’s temperature rises too much, it can affect metabolic processes and other systems within the body. Typically horses start as partially anhidrotic, then progress to complete anhidrosis.

Many think that anhidrosis occurs because the body’s sweat glands are not getting the signals to trigger sweating, but Kellam points out the opposite is true.

“The thing we know about anhidrosis is that the sweat glands in the horse are being over-stimulated,” she says. “Because of over-stimulation by these chemicals in the body, which we call neurotransmitters, at some point the glands just stop working. It’s like they’re getting too much information.”

Why over-stimulation occurs is still a mystery. Some research suggests it’s due to an imbalance of dopamine in the body, while others attribute the condition to an overactive thyroid. These theories lead to a variety of treatment options from which horse owners can choose.

Some simply do best if moved to a less-humid climate. Anhidrosis is more common in hot, humid environments, especially in horses that move from a cooler environment to a hot, sticky climate.

Sailor was put on a management program that Kellam had success with in past cases. He was fed a supplement called One AC twice a day for two weeks, then the dose was reduced to once a day.

“Many supplements will have B vitamins in them, but One AC also has L-Tyrosine, [an amino acid] which helps with the dopamine imbalance,” she says.

Kellam also instructed the feeding crew to crack open a cold one for Sailor. The gelding was required to drink a can of beer every day. Although no one knows why, she says, the addition of beer can stimulate sweating. Wennberg claims the old wives’ tale worked, and with a little help from Pabst Blue Ribbon mixed in with his beet pulp mash, Sailor was sweating again within weeks.

Anhidrosis can be life-threatening, but with strict management, the prognosis is good, and usually the horse can begin to sweat normally. Fans, air conditioners, and riding and hauling in the early morning when it’s coolest can help a horse regulate its body temperature.

“Once we identify a non-sweater and get that horse on a program prior to him totally not sweating, he can be a very productive, athletic horse,” Kellam says. “But you have to monitor him every day and make sure what you’re doing is working.”

The addition of electrolytes can also improve the horse’s overall condition.

“When you take blood work on these horses, a lot of times their electrolytes are out of balance because of their inability to sweat,” Kellam says. “When horses sweat, they lose electrolytes like sodium and chloride, and they lose potassium through their urine. In other words, horses manage their electrolytes through sweating.

“One thing people will do is administer an electrolyte paste, which gets the animal to drink more.”

After his sweating resumed, Sailor was ridden using short-interval training to keep him from overheating. Students would warm him up for 10 to 20 minutes, and then train in 15- to 20-minute blocks with 10-minute cool-downs in between.

“He started to really thrive with that,” says Wennberg. “He felt better and was way more comfortable.”

Sailor is now 12 years old and semi-retired, living life as a “babysitter for yearlings and 2-year-olds,” and a lesson horse, says his new owner, Jessica Page, who runs a summer camp for children in Brevard, North Carolina.

She says there was an adjustment period of about six months in which the horse’s body acclimated to the new environment. It was less humid in Brevard, about 200 miles west of Laurinburg, but the change still affected his body.

“He’s earned his keep for the rest of his life,” Page says.

And Sailor still gets his daily beer as part treatment, part reward.