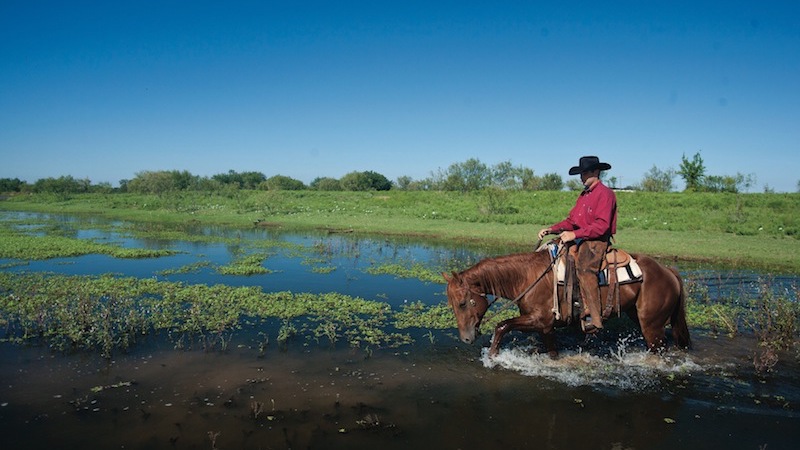 The weather just had to be a culprit. Every year in mid-spring and again in mid-fall, Pat Burton, a farrier in Burleson, Texas, expects a roughly two-week-long spike in the number of laminitis cases he sees.

“Usually we’ll see 55 to 75 cases in that spike,” he says. “We have records of that over the last 15 years, and it’s pretty consistent. It happens about the time that the grass starts growing faster, timed with spring rains or fall moisture.”

Increased sugars and starches in fast-growing grass act on a horse’s metabolism and increase a horse’s risk for developing laminitis (inflammation of the tissue binding the hoof wall to the foot).

This year, that spike extended over three-months—basically April, May and June, Burton says—“and we saw 185 chronic and acute cases of laminitis, three times normal.”

Meanwhile, Leslie Schur, DVM, of Desert Pines Equine Center in Las Vegas, Nevada, suddenly saw an
increase in the number of horses she treated for white line disease (hoof wall separation caused by infection). Many were in town for a big cutting in June, and she noticed a large number had come from Texas.

Both farrier and veterinarian pointed fingers at the state’s 2015 weather. A wet winter followed by heavy spring rain virtually eliminated the severe drought that had gripped much of Texas since the fall of 2010. Although it offered a much welcome recharge for the land and the state’s reservoirs, the rainfall wreaked havoc in flooding from Houston to Wichita Falls. For horse owners, it created extremely lush pastures that put far more horses than normal at risk for laminitis, and it made conditions prime for bacteria and fungi to invade hoof walls.

It was a good example of how environmental extremes can wreak havoc on horses’ hooves.

Designed to Change
Burton points out that the hoof is dynamic and designed to change.

“It’s not a static structure like a block of wood,” he says. “It does adapt to the environment it’s subjected to.

“A foot in a more arid climate develops a denser structure. The horn tubules that make up the hoof wall are denser, making the foot stouter and harder. Conversely, horses in a very wet environment develop a foot that’s typically softer, longer and more splayed out.”

Owners often don’t realize how much horses’ feet change when their environments change, he adds.

“They’ll go through an adaptation stage, and you might notice a ring in their foot,” he describes. “I call it a ‘stress ring’ or a ‘change ring.’ It indicates a different growth pattern.”

A ring also can be caused by a change in exercise or nutrition, or by conditions such as laminitis.

Problems can crop up when environments go to extremes, especially when horses shift suddenly from one extreme to another.

“For example, think about a piece of leather that has been soaked in water and then left out in the sun and dried, and then wet and dried again,” Burton says. “It’ll crack very easily.

“It’s similar to what happens to the structure of the hoof wall in extremes in moisture and temperature. The material that binds the horn tubules [in the hoof wall] together expands with moisture and contracts when it dries out. That extreme expansion and contraction lends itself to a weakening of that material.”

It makes the hoof wall susceptible to fractures or cracks, and the wall can start splitting off in layers, which makes it vulnerable to infection.

Environmental changes that affect hooves aren’t always as obvious as flooding or drought, Schur points out.

“I had a barn that switched to a new type of bedding that ended up affecting the drainage underneath their stalls,” she gives as an example.

“The increase in moisture resulted in an epidemic of white line disease. Almost every horse had it.”

The key is to be alert to signs that indicate an adverse change, such as a horse repeatedly losing shoes, a hoof wall that chips off, or a sole that becomes white and chalky.

“The nice thing is, the hoof re-grows,” Schur says. “It is going to replace itself roughly every 12 months. So if we’ve got a problem, we can often grow out healthy hoof if we’ve addressed the issues that caused the problem in the first place.”

Sole Issues
An arid desert environment produces a hard, dry foot, which can be good, Schur says, “as long as it’s doing its job and is healthy.

“Usually it’s the distal end, or bottom of the foot, that gets really dry, and cracks and chips off more,” she says. “It’s not a huge issue as long as you maintain farrier care. I tell my clients who keep their horses barefoot to have the feet trimmed at least every four to six weeks to remove that very dry, useless foot.”

Without regular trimming, that cracked and chipping hoof wall is vulnerable to bacterial or fungal infection.

However, an extremely hard foot compounds problems like a sole abscess.

“When the foot is rock-hard and dry, it doesn’t give at all and makes the pressure from an abscess extremely painful,” Schur says. “You often can’t cut to the abscess right away to drain it because the foot is too tough. We’ll soak or poultice the foot to try to soften it. This relieves the pressure and gives the horse a little relief.”

Schur also warns to watch for what she calls a “false” sole.

“We have all cleaned out a foot at some point and noticed a white, chalky sole that crumbles and falls out. I call that a false sole because there is sole covering the bottom of the foot, but it’s not live, strong, healthy foot; the sole is really exfoliating or flaking out.”

It indicates increased moisture in the foot, and an owner needs to figure out the cause. Addressing the issue could be as simple as cleaning the horse’s feet out more often and applying diluted bleach water to help dry the foot out.

If a horse has a very thin sole on the bottom of the foot, it makes the foot vulnerable to bruising.

“I had a horse come in that had competed at the [National High School Finals Rodeo],” she says.

“He was turned out on pasture afterward, pulled a shoe and went lame. They put the shoe back on but he was still lame.

“He had a thin, or ‘slipper’ sole: There was not enough sole depth between the coffin bone and the ground. His was about 7 millimeters, and I like to see about 20 millimeters in our environment.

“I think this horse was exposed to a little too much moisture on pasture, then lost a shoe and was walking around barefoot.”

The horse’s sole began to flake with the moisture, became thin and then bruised, she says.

“When they get bruises like that, it can be a vicious cycle. They need healthy sole for the blood supply to get down into the foot and grow sole, but the bruise compromises what sole they have and makes it difficult to grow back.”

Invasion Issues
Water and mud block out air and create anaerobic environments in which bacterial and fungal organisms thrive. A horse’s hoof in that environment is ripe for their invasion, most often in the form of white line disease and thrush.

“It always starts at the bottom of the hoof wall, because that’s where it’s open and where bacteria and fungi can enter,” Schur says. “You have to think of the foot as three-dimensional. While the white line can easily be seen at the sole, it goes all the way up to the coronary band.

“If we’ve got white line disease starting at the bottom of the foot and it extends 5 millimeters deep, you can get that off with a trim. But if it extends higher up, large sections of the hoof wall can break off.

“When it affects the ability of that natural hoof wall to hold the foot together, then you can have movement and rotation in the coffin bone with white line disease just like you can with laminitis.”

White line disease can lurk in the hoof, with horses showing no signs of a problem until large segments of hoof wall break off.

“I have seen a broodmare that was out on pasture and no one knew anything was wrong,” Schur says. “She broke off her entire dorsal hoof wall and the tissue underneath was dead, indicating white line disease. She was never lame.”

If white line disease is a concern, radiographs can be helpful.

“You can see the hoof wall separation on the X-ray,” Schur says. “And then we sometimes can take off the top layer of hoof wall and treat it.”

Thrush is a fungal and/or bacterial infection most often associated with the frog. The affected area often smells and has a black, tarry look to it. It typically crops up when you combine extremely moist conditions with feet that aren’t cleaned out as often as they should be for that environment, whether it be a consistently urine-soaked stall or a wet pasture.

“Quite commonly, you get thrush in the the frog, but it can also affect the general health of the sole,” Schur says.

“It can also affect the back of the frog, where it leads into the heel bulbs.

Often thrush can proceed right up between the heel bulbs, creating a pinched heel.”

It’s important to regularly clean the foot and apply a topical antifungal/antibacterial agent.

“I tell my clients to make sure to clean the frog sulcus [the crevices alongside the frog], but don’t forget the middle of the frog and the back at the heel,” she says.

The Best Treatment
The best hoof treatment by far, in both Schur’s and Burton’s opinions, is the most simple: regular maintenance.

Burton points out that frequent trimming can ward off problems.

“Maintaining the foot is a lot easier with shorter intervals between trims than when you extend them out and you have to take a lot of foot off,” he says.

“And if you routinely clean your horse’s feet out, get them exposed to air, and treat them with something
that kills bacteria, you are going to alleviate a lot of the problems the environment throws at you.”

Most people only clean out their horses’ feet when they ride. But in most cases, that’s not enough.

“I’ll give a client a hoof pick, to make the point,” Burton says. “Then I’ll find it with dust on it somewhere in the barn. I’ll ask if they’ve been cleaning their horses’ hooves, and they’ll say, ‘Yeah!’ And I’ll point to the hoof pick ‘Did the batteries on the hoof pick run out?’

This article was originally published in the September 2015 issue of Western Horseman magazine.