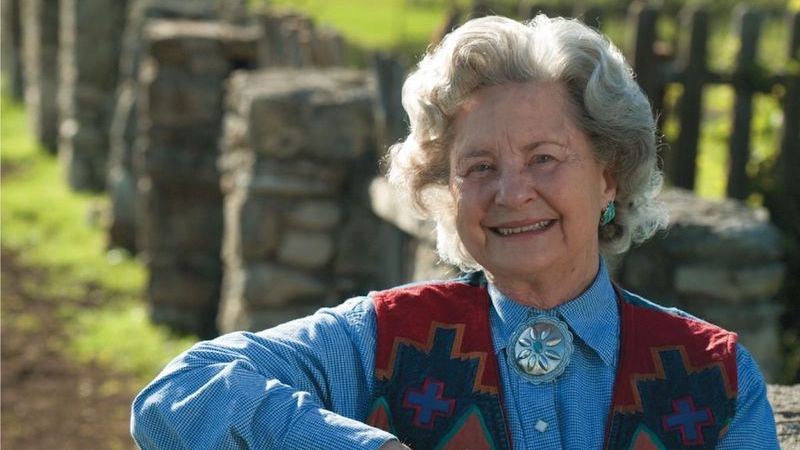 Through her work with the National Cowboy and Cowgirl Halls of Fame, Mitzi Riley of Aledo, Texas, makes sure other dedicated cowgirls receive proper recognition. Though it has been years since she performed as a trick rider in front of applauding crowds, the 79-year-old still has an infectious smile and an undeniable passion for rodeo.

I HAVE TO ADMIT I enjoyed the applause. I was entertaining, and that was my job. If they liked it, then that made you feel real good.

FROM THE TIME I WAS 6 until I was 26, I rode in the rodeo and trick rode. Then I married Lanham, became the supportive wife and raised five children. When I quit [trick riding], we had three children. It had got really hard to travel with them. And the oldest one, Kelly, was ready to go to school.

I ALWAYS THOUGHT MY MOTHER [TAD LUCAS] HAD THE COWGIRL SPIRIT because nothing ever kept her down. Mother was hurt quite a lot. That was when she was contesting, and she’d try almost anything to win. She shattered her arm doing a trick. The doctor told her that it would never be strong or well again, but she could do some things with just one arm. That’s when she let me go into trick riding. We were team. I was 6.

YOU ALWAYS SAY, “I can do it better than you can do it.” That’s cowgirl spirit.

I NEVER WAS NERVOUS IN THE ARENA. I had done it so often I was really at home in the arena. I was a hambone. I loved it.

I TOOK MANY A SPILL, and I’d have a sore shoulder or aches and pains that came along with it. But not enough to put me out of showing. I had a good teacher, and I knew how to fall—to a point. And my horses were trustworthy. I trained them myself.

WHEN HE HEARD A BAND, my black horse just went to prancing. He’d just be standing around with his head down, and all of sudden when the band would play, he’d come to life. He’d perk his ears and do little side steps. He was showing off. He loved the band.

MADISON SQUARE GARDEN WAS THE BIG RODEO. That was like going to the National Finals. It would last the whole month of October. I never saw a skyscraper until I got there. I just loved it.

The first year I went to New York, it was 1943, during World War II. The town was blacked out. Heavy curtains were over the windows and all the lights on Broadway were dimmed. There were U-boats in the bays.

Roy Rogers was the star that year, and he told me to smile at the audience when you ride by and look at each one so you were performing for just them.

WE WERE ALL PATRIOTIC. In almost every town where there was a rodeo, there was an Army field or Air Force field, and we’d entertain the troops. If you were keeping them happy, you felt like you were doing something. I wrote lots of letters to soldiers. That was kind of the feel of the nation at the time.

It was hard to travel during the war years because there were no tires, gas was rationed and you had to have stamps to get a pair of boots or shoes. We managed to get enough gas stamps to go to the first rodeo. Then we made a deal with the rodeos. If we rode in their rodeo, we’d get gas stamps so we could go to the next town.

SO MANY OF THE COWBOYS WENT INTO THE SERVICE. That’s when they started using women in more events. And girls’ rodeos started about that time. The women held rodeo together until the guys got back.

LANHAM HAD JUST GOTTEN OUT OF THE SERVICE when I met him. He was in the Air Force. I loved to hear him talk. He had a West Texas twang. We married the next year and went to New York for our honeymoon.

THE CALF ROPING was one of my favorite events. When Lanham roped, you were expected to rope your calf, no matter how long it took. If you missed the first loop, you threw the second loop. If you missed and just rode out like they do nowadays, you wouldn’t get to come back.

I think it has become a terrible event. The cowboys are all athletes now, and that’s great, but they’re also in a show and they should give their best effort for the people who have bought a ticket. And by not roping, the crowd doesn’t know what to think. You can’t tell whether they have good horses.

This article was originally published in the April 2007 issue of Western Horseman.