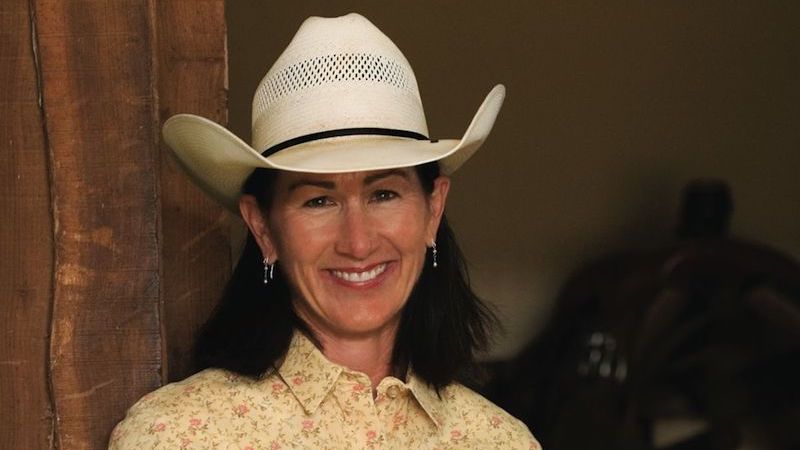 As manager of the 7S Stuart Ranch, Forst believes in the power of people.

Terry Stuart Forst took the reins of her family’s legendary ranch after her father passed away several years ago. Under her watch, the cattle has improved and the horse program has gained notoriety. She serves as president-elect of the Oklahoma Cattlemen’s Association, was named the 2007 Oklahoma Cattleman of the Year, and will be inducted into the National Cowgirl Hall of Fame later this month.

I ALWAYS KNEW that this was what I wanted to do. My parents actually discouraged me in some respects— Daddy in particular, maybe because I was female. He believed certain things were for a boy or a son , not for a daughter. And that’s fine. But that, I always thought I had to prove myself to . So, I had this desire to be good at whatever I chose to do.

IT IS NOT A “ME THING.” Never has been, never will be. We have a great group of people [on staff]. a job to do, whatever it may be that day. We all very well because we communicate.

DADDY LOVED to quail hunt, and I remember vividly one time my cousin and my dad were going hunting. But because I was a girl, I didn’t get to go. And it ate on me something fierce.

I LEFT THE RANCH for a while, which was good. reason I came back was to get the cow . Daddy actually approached me about it, calving percentages back to where they be. Weaning weights were low and a lot of going south. I said, “I’m not going to work for you if I can’t help make this ranch successful.” I think Daddy was pleased when I came home. We had a dream for this ranch, and it’s materializing.

EVERYTHING’S CHANGING around us, and if we and do a better job, we won’t be here. like it or not, you better grasp change willingly. I always heard my dad say, “This is the way we’ve it,” and I promised myself that I would never that.

THE PEOPLE YOU SURROUND YOURSELF WITH ought to complement each other. If you’re going to put a crew of people together, you have to respect their ideas and
the fact that they may have a better idea than what has always been done.

I DON’T ACT LIKE THE BOSS. I’m better at taking giving them. But I have plan for everything. I’m the one that puts together the plans, the dreams, the vision of where we want to go.

A GOOD WORK ETHIC is most important. Good manners. Respect. Doing the best you can at whatever you do. You’ve got to try.

THE YEAR CHRIS [LITTLEFIELD] WON [the Working Ranch Horse Competition] in Abilene on Real Gun [2002], ended up third in the ranch rodeo. We had a year at Abilene. That Sunday night, we came had about 50 mares to palpate and breed. Somebody said, “That glory is short-lived.”

IT SEEMED LIKE WE GOT A LOAD of calves in about 10 minutes before each of those big storms came year. When the last load came in, there was a , we were having a thunderstorm, the ice down hard and fast, and it snowed a little. we had every weather condition you could day, except .

IT’S NOT AN 8-TO-5 JOB you have to be pretty devoted, and you have to love what you do. But it’s good . There are a whole lot more good days than tough days.

IT’S NOT A MAN or a woman issue. It doesn’t really you work with as long as you respect everybody. I don’t think it matters what sex they are. There should difference, I believe. Except women are a little , I know that.

I DON’T WANT IT to ever be a gender issue because I respect what so many men have done. If I’m not qualified, I don’t need to do it. But if I am qualified and I think I can do a good job, by golly, I’ll dive in I’ve got.

This article was originally published in the November 2007 issue of Western Horseman.