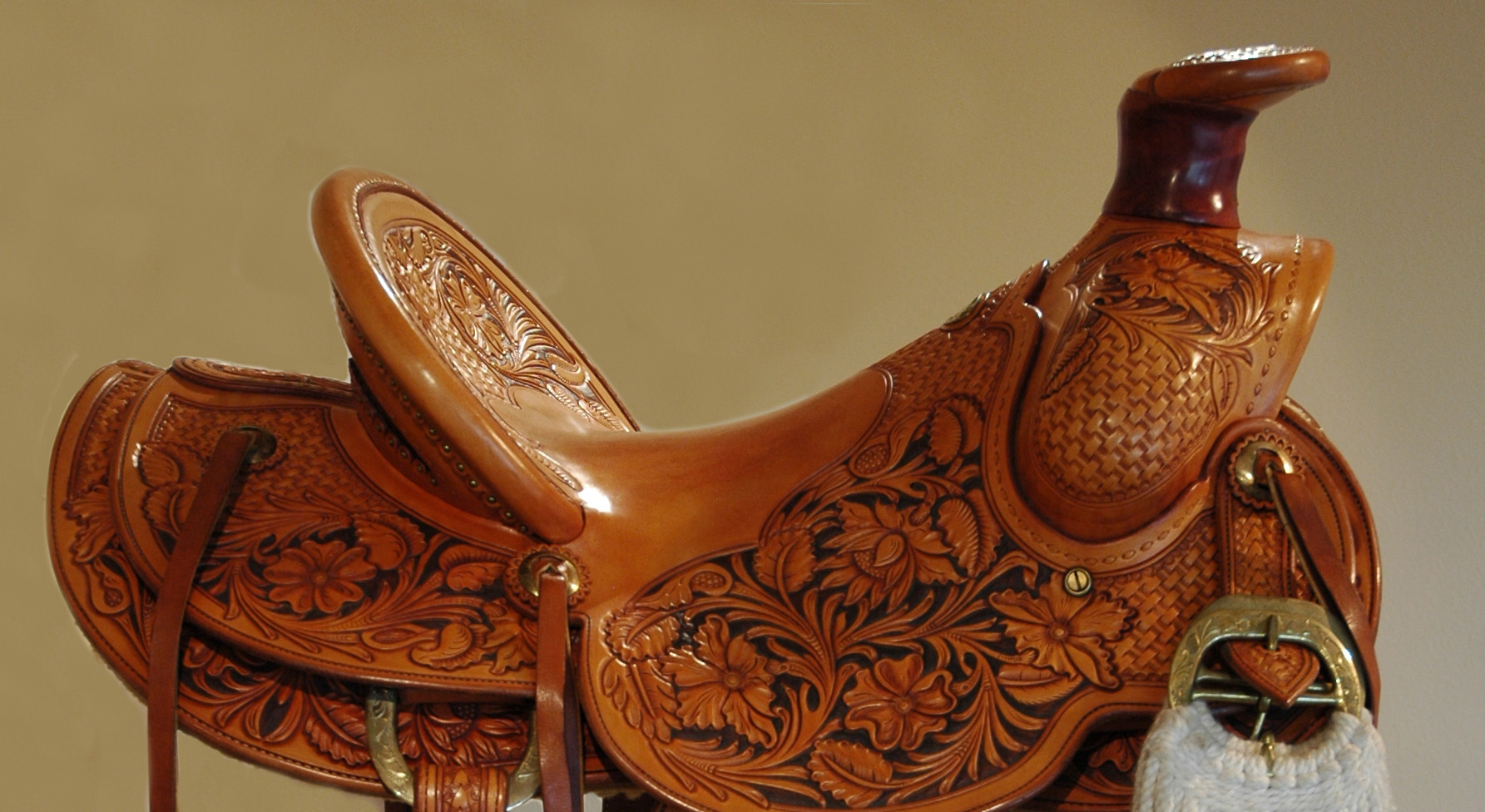 May is a special month at Western Horseman as it marks another highly anticipated special gear issue. Western types can be pretty intense about their saddles and other gear, so the issue has historically been and continues to be very popular. So it is timely in this month’s “Out West” that we focus on one of saddlemaking’s enduring legends, Chas Weldon, who has built highly coveted saddles for more than 40 years. I chatted with him recently from his shop in Billings, Montana.

Back in 1980, Western Horseman writer Chan Bergen wrote a story about an emerging figure in the leather arts. Weldon was born to his family’s ranch outside of Billings and never really thought about being a saddlemaker, as he just wanted to cowboy. As a boy he loved to paint and sculpt, and after high school he started cowboying on local ranches. He got his start in saddlemaking in 1976.

“I got hired by the saddlemaker at Connolly’s [Saddlery] in Billings that year,” he says. “I had known the people there my whole life and had done a lot of business with them. It was a great old shop, opened in 1912, and I was hired to work under the head saddlemaker, Chuck Harris. I had shown him my sculptures, and one of his helpers had quit, so he was hiring. He knew I had some creative leanings and hired me to be his apprentice.

“I knew nothing about leatherwork at the time, but we got along and he wanted to teach me his approach. So I learned how to do repair work, and as I progressed I learned about all the parts and pieces that fit into a saddle. So when I was ready to make a saddle, I had already figured out a lot of the process. But I must tell you, it’s a lot harder than it sounds.

“During that period I learned a great deal about working with leather, and many of those skills I use today on every project. At Connolly’s I learned how to make really practical, long-lasting ranch saddles under Chuck. They were tough—sort of constructed like a dam and were very plain—but I did learn how to basket stamp there.”

After a couple of years, Weldon left Connolly’s to work for Jim Lathrop at his saddle shop in Three Forks, Montana, where Lathrop encouraged the young maker to establish his own style.

“We made everything there,” Weldon remembers, “single-rigged, double-rigged, slick fork with buckin’ rolls—whatever anybody wanted.”

From there he went to Sheridan, Wyoming to work at King’s Saddlery—ground zero for founder Don King’s style of overall small flower-stamped design or full-flower stamping. After nine years with other makers, Weldon finally took the plunge and spun off on his own.

One of the reasons Weldon saddles are so sought after is his unique way of crafting the saddle’s ground seat—one of the most important parts of a saddle, the part you sit on.

“I learned how Chuck Harris did his at Connolly’s, but it was very different from how I do mine,” Weldon explains. “I guess it all started around what I needed. I am so stubby legged, and all I ever did was ride horses and cowboy until I started making saddles in ’76. The saddles I had were too wide and too low and you felt like you were sitting on a barrel. I realized all I knew was what Chuck Harris had shown me—seats that were wide and flat, fine for long-legged types.

“So when I started making saddles for other people, I needed to do what they wanted. So what came to me as I was carving seats was more of a vision of a bicycle seat—flat in back and narrower in front as your legs are moving, swinging when you ride. Within the ground seat there is a piece of galvanized tin called a seat plate that you can shape by hand. So I would crown up the front to make the seat a little narrower, and as I worked I would sit in the seat and if it felt good to me, I kept going. It seemed to work as customers liked what I was doing—especially those who rode for a living. I’m at a point now that my tree makers know what I want and can shape the tree to design.

“Building a ground seat is literally sculpting. A piece of damp leather is shaved with different tools. If it were clay I could do it with my hands. I see the seat and I transfer that image to my hands as I work. It creates a nice narrow spot in the front and flat spot in back for your pin bone.”

“Still everything I do comes from what I learned from Chuck Harris,” he continues. “Edging the leather, slicking the edges, forming, fitting and sewing—everything a maker uses every day. I was never taught how to tool, other than basket stamping, so I figured I would have to teach myself. When I went to King’s in Sheridan, I just started picking it up, starting with lots of belt blanks.”

As for stamping patterns, Weldon says he draws the patterns by hand for each saddle, and each is as unique as the saddle itself.

“I don’t have any set patterns for tooling,” he explains. “I just start drawing and it keeps the process special for each customer’s saddle.”

One of the big influencers in Weldon’s life was the late Western painter Joe Beeler. He was working on the Kokernot o6 Ranch in Alpine, Texas, in 1979, where he met artists Gordon Snidow and Fred Fellows. Snidow invited Weldon to the annual Cowboy Artists of America show and sale in Phoenix, Arizona, in the fall of that year. He took along some gifts for the artists as a thank you, and included among them a new design he had figured out for his bridles, which featured a braided browband.

“That started something,” he says. “I can’t tell you how many of those I made over the years. I don’t really do them anymore as I am just a one-man shop and have to focus on saddles.”

The gifts were well-received and it was there in Phoenix that he met Beeler.

“Joe just seemed to really like what I was doing,” Weldon remembers. “And he asked what else I made and just ordered one of everything. He became a dear friend and ordered all sorts of things throughout the years up until his untimely death in 2006. He was probably the major mentor in my life, and our contacts were frequent and cherished, as it was still the era of landlines and letters. He even used one of my saddles as the model for his heroic Thanks for the Rain sculpture. He was a joy.”

Beeler had many positive effects on Weldon’s creative life, as he was instrumental in creating the original Trappings of the American West shows at the Coconino Center for the Arts in Flagstaff, Arizona. The first show was held in 1986, and one of Weldon’s headstalls appeared on the catalog cover, as well as a basket-stamped saddle in the saddlemaker portion of the show.

“It was a huge get-together of the creative West,” Weldon remembers. “It wasn’t just gear makers, but painters and sculptors and engravers and knife makers and poets and musicians—all the creative forces of the West. It was really the first of its kind and came a year after the first cowboy poetry gathering in Elko [Nevada]. Joe was a big thinker, but never took a lot of credit for it. I’m sure he just wanted all those creative types to get together and whoop it up. Of course the event helped all of us and our work.”

During the 1990s Weldon took that focused Westerner gathering idea and created another event where he and Beeler would invite significant creative Westerners to a three-day branding somewhere in Montana. He reached out to ranch owners who would entertain the idea of 10 or 12 guys to come and help brand, as well as get together to swap stories and laughs. Beeler and Weldon called the even “Beef, Beans and Bull—-,” and it included the likes of horsemen Buck Brannaman and Greg Eliel, saddlemakers Dale Harwood and Chuck Stormes, singer-songwriter Ian Tyson, late treemaker John Michaud, and the late writer Don Hedgpeth, who wrote of the gatherings in his 2004 biography, Joe Beeler: The Life of a Cowboy Artist. The cast of characters and location would change each year, and the event held together until 2002.

“I originally got the idea for the event after reading about how artist Ed Borein helped create the Rancheros Visitadores ride out in California,” Weldon explains. “It was great fun. But when something’s over, it’s over. Ten years was plenty.”

Today, Weldon’s life is still defined by his saddlemaking—which he does in many cases seven days a week, a feat that for anyone would be lofty. But he is quite philosophical about it.

“I think it’s because I literally start over every time with every saddle,” he says. “Whatever I learned from the previous saddle, I apply to the next one and hopefully make it that much better. It holds me to the task at hand.”

I asked him about what he is seeing regarding up-and-coming saddlemakers.

“The are many new ones I am seeing now on Instagram and Facebook—two things that sure make it a lot easier to promote your work than when I started,” he says. “And from the looks of the pictures I’m seeing, there is some very nice work out there. The one thing that is truly amazing is the growth and quality of flower stamping over the years. It’s something that probably started 20 to 25 years ago at the [Rocky Mountain Leather Trade Show in Sheridan, Wyoming], where people like Jim Jackson and Don Butler would give stamping classes. The art has really taken off.”

When asked what’s coming in the future, he laughs and says, “Making saddles is what I do. It’s how we make a living, and I don’t plan to stop. One thing I am interested in doing is making some half-size saddles, like the old salesman’s samples. I have been collecting half-size tress, and when time permits I want to make them.”

It’s something that would also help him with the “show situation,” as he calls it. Folks want to include Weldon in gear shows because he is a draw, but financially it makes no sense to spend time doing a “what-if-it-sells” saddle for a show when he has customers waiting. So he believes the half-size saddles could solve that.

“I can’t hold up a customer order with a show deadline, so maybe these little, half-size saddles could be a solution,” he says. “Dale [Harwood] made a series of them, and Don Butler did one with little grizzly bags. But they won’t get in the way of customer saddles. For me, the fact that people want saddles from me is a joy.”