From each new decade seems to emerge one great all-around cowboy. The 1950s produced Jim Shoulders. In the ’60s, it was Larry Mahan. Tom Ferguson dominated the ’70s. And the ’80s belonged to Lewis Feild.

It has been said that a man’s accomplishments can be measured by the respect of his peers. By this yardstick, Feild is indeed an accomplished cowboy.

“A lot of guys are conservative on rank horses, but he’ll put it to all of ‘em,” said Corey. “When he’s out ahead of you, he’ll really put it to ’em and that makes you think, ‘ Yeah, that’s how to do it.”‘

“Whenever I am at a rodeo with Lewis Feild, it is an honor to compete beside him,” said Appleton. “What can you say about a guy like Lewis? His record speaks for itself.” . 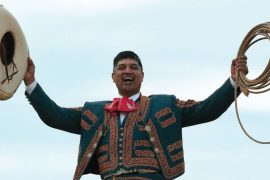