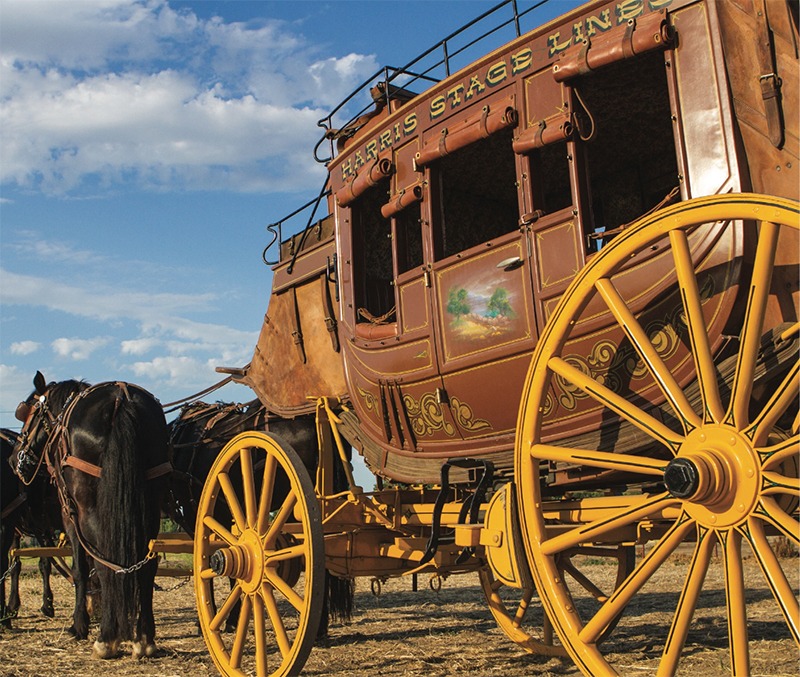 The Legend of the Stagecoach

A handful of devoted people, from drivers to craftsmen, do their part to uphold the legacy and tradition of the Concord stagecoach.

Nowadays it’s hard to imagine why a horse-drawn coach—a vehicle without air-conditioning or cruise control—would matter in the modern world. But standing in front of a Concord stagecoach, it’s easy to see the fascination some have with the iconic vehicle.

Enormous wooden wheels and thick leather straps support the carriage, and handmade ironwork reinforces the design. Each hinge and buckle has a function, and the coach’s design is so ideal it hasn’t been drastically modified since originally constructed almost two centuries ago.

The Concord stagecoach was developed by J. Stephen Abbot and Lewis Downing in 1827 in Concord, New Hampshire. It wasn’t the first stagecoach ever made. Up and down the East Coast, horse-drawn vehicles were used to carry passengers to and from hotels and other destinations. But the eastern coaches traveled only short distances, down maintained roadways.

The Concord stagecoach was built for use in rugged terrain and on long-distance hauls. It was designed to carry a growing nation to new, exciting beginnings and expansion. To some, it is as much a symbol of the Old West as the cowboy.

Today, keeping the history of the stagecoach alive is an ongoing labor of love for a handful of carriage enthusiasts. Their connections to these vehicles, like the spokes on a wheel, trace back to the same point: a desire to preserve and promote the stagecoach of the Old West, and what it represents.

Lessons of the Line
“To me, nothing says ‘West’ more than the stagecoach,” says driver Tommy Harris. “Not the cowboy, Indian or teepee. Not the six-shooter or the Western hat.”

Early one morning in Paso Robles, California, Harris and his wife, Debby, hitch a four-up team of black crossbred horses. Their home is in the heart of stagecoach country, where old lines used to weave through the grasslands. When Harris guides his coach on a trail behind the house, it’s like a snapshot from the past.

He and Debby started Harris Stage Lines in 1983 after several years of riding and training horses for other outfits. Today, their main focus is giving lessons and offering clinics on how to hitch up and drive horse-drawn vehicles, but they also make appearances at rodeos, parades and other events.

Harris Stage Lines carried mail for the United States Postal Service through Paso Robles for the city’s 125th anniversary in 2014, its coaches were driven in the Rose Bowl Parade representing Yosemite National Park, and hauled passengers such as actors Rock Hudson and Doris Day, and trick rider and actor Montie Montana.

Harris’ experience stems from doing stunts with wagons and chariots for rodeo companies and movie productions. He got his main start with stagecoaches from Flying U Rodeo Company in Marysville, California.

“I helped run the ranch [at Flying U Rodeo] and then became the wagon guy, tipping them over on purpose,” he says of the performances he used to do. “I loved it. Through the rodeo company I was able to be around a lot of guys that were in the movie business that tipped wagons, and learned from [stunt driver] Yakima Canute driving bug really set sail with me.”

His passion for stagecoaches is palpable, and he’s proud of the Concord coach he and Debby own.

“When Tommy and I got together, all he talked about was getting a stagecoach,” Debby remembers. “I thought, ‘How are we going to get one? We just work for a rodeo company.’ But the opportunity arose and we had this built.”

“Our stagecoach is number 20 out of the 60 that were built by [legendary stagecoach builder] J. Brown,” he says. “There are people who own coaches and do parades, or there might be one stued in a museum that’s brought out once a year. There are stagecoaches that aren’t driven because they are so old. We’re trying to keep tradition alive and share the history of the transportation coming west. [I enjoy] sharing what I’ve learned from my mentors.”

The historical relevance of stagecoaches is not lost on Harris, and he lives to share it. He points out the similarities between the stagecoach lines of yesteryear and present-day transportation.

“The stagecoach stops were like the truck stops of today,” he explains. “Today’s highways, like Interstate 40/Route 66 and Interstate 10, were stagecoach routes. [Interstate] 101 was a major route.

“It used to cost thousands of dollars to maintain that many head of horses and all the wagons, so Wells Fargo contracted out [drivers]. They owned it all and hired the people, just like the trucks and [trucking companies] of today.”

To him, the importance of preserving the stagecoach is imperative to acknowledge how innovative the West was during that time period.

“The more you learn about the past, the better prepared you are for the future,” he says.

Harris has made his living hitching up and sharing the thrill of driving. He says he’d love to organize a gathering of J. Brown coaches as a tribute to the man who did so much to immortalize the Concord.

Cartwright was born and raised on his family’s ranch in Benbrook, Texas. For years he trick rode and worked in the movie industry riding horses. In the Clint Eastwood movie Bronco Billy, Cartwright was the stunt double every time Eastwood’s character rode a horse.

For more than 20 years, Cartwright and his wife, Georgia, have been driving for Wells Fargo, steering three coaches through 100 parades every year. Cartwright’s mother, Carolyn, serves as an outrider and travels with them.

He says that Wells Fargo can put out 25 coaches at once around the country, with at least that many drivers. While Cartwright owns his own horses and coaches, Wells Fargo owns a number of coaches and the semi trucks used to transport them.

There are strict requirements for drivers for the company, with a minimum of 10 years of experience to start.

Cartwright’s coach is a replica of a Concord overland coach, which was designed to carry up to nine passengers inside. First-, second- and third-class tickets were sold, with first class up closest to the horses. That seat position, as opposed to the other two, missed dirt flung from the wagon wheels.

Passengers also had to abide by three simple rules: If you brought food or beverages, you had to share; if you fell asleep, you must keep your head from resting on your neighbor; and there would be no talk of religion or politics. Cartwright adds those rules were simply guidelines, and, like today, probably broken.

In addition to his white team, he has nearly 40 head of stocking-legged sorrel geldings that he uses to drive. But his white horses are special to him, both for their looks and their historical signance.

“If you were driving horses at night, you would want a white horse in the front, and preferably a team so the people on the trail could see you,” he says of the teams driving nearly 200 years ago. “Think about a pitch-dark night with no moon. That’s some of the history that just gets lost.”

He says the hardest thing about driving is acquiring a feel for the lines, because a good feel helps maintain safety for the horses and the public when performing at amusement parks, fairs, during the filming of commercials and in parades.

“You can teach anybody to hold a line,” he says. “But I don’t know how you teach somebody the feel and how to read what those horses are going to do.”

Cartwright silently points to his heart when asked why he chose to drive down the stagecoach path. He is thankful Wells Fargo understands the importance of the stagecoach and continues to keep the tradition alive through its logo and marketing. It also allows Cartwright to earn a living doing what he loves.

“I have that little something in me that says I should have been born 100 years ago,” he finally says. “I like doing my little part to preserve history.”

Read the entire story of the stagecoach in the December 2015 issue of Western Horseman. 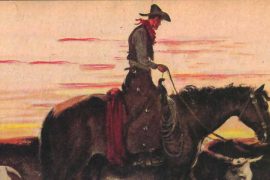